Twitter now has 255 million users, but activity has dropped year over year

Twitter now has 255 million users, but activity has dropped year over year

Can the service take flight again after a bad stumble?

Twitter posted solid financials and user growth today, but it wasn't enough to reassure Wall Street after the company's struggles last quarter. The company reported $250 million in revenue, more than double what it pulled in for the same quarter last year. But it also reported a net loss of $132 million for the period, more than four times what it lost in the first quarter of 2013.

Investors were actually more concerned with its user growth than financials. Twitter added 14 million new people, more than it did last quarter, for a total of 255 million active users. Engagement was also up, an improvement over last quarter's decline. But total timeline views still remain below their 2013 peak, a troubling sign. CEO Dick Costolo said that some of this drop in timeline views is due to product changes. For example, by collecting a conversation between multiple people into a single stream, Costolo says new users have a better, simpler experience, which results in less clicking around.

Twitter has a clear challenge ahead of it: how to connect with mainstream consumers and get its user growth moving in the right direction again. As its new chief operating officer Ali Rowghani told the Wall Street Journal this morning, it's all about "the question of how do we really turbo-charge the natural, organic growth rate that we have." 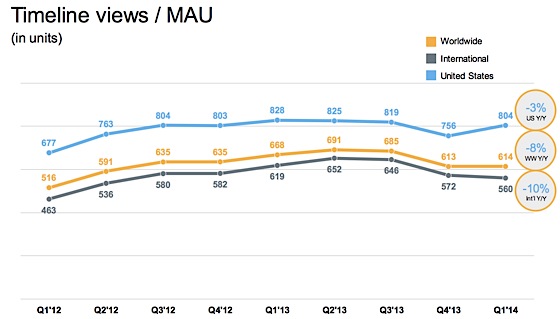 Anticipation was high for this quarter's results. Last quarter the company turned in some improved financials, but showed stagnant user growth and an actual decline in user engagement. All this has added up to a big drop for the stock, which is currently sitting around $40 a share, a more than 40 percent decline from its high at the start of this year. The stock is down more than 5 percent in after-hours trading based on today's earnings report.

On the earnings call, Costolo called out big events like the Oscars, Olympics, and Super Bowl as major drivers of Twitter's advertising growth and signals that it was increasingly important to mainstream users. He noted that the company saw more than 3 billion views of Oscar-related tweets in the 48 hours after the event, an audience that puts it on scale with major services like YouTube. The company's challenge now is proving its relevance and reach beyond these massive televised events.

We've already begun to see the results of Twitter's campaign to connect with basic users as it moves toward an image-heavy stream and profile pages that seems to bring it closer in style to its rival Facebook. "There's a bunch of short-term tactical stuff that is already in process that will move the needle," says Rowghani. "Over the medium-term we are going to make a bunch of enhancements to the way early users to our platform sort of become healthy and engaged users."