Microsoft, Apple, and others form a pact to make patents cool again

Microsoft, Apple, and others form a pact to make patents cool again

Over the past year, the debate over patent reform has heated up, and attention has focused on the dark side of patents, particularly "trolls" who extract money off inventions they don't plan to use. But Microsoft, Apple, Ford, and several other companies are banding together to support a system that they depend on to incentivize new research. The newly formed Partnership for American Innovation (PAI) exists to promote a "strong patent system" and a well-funded US Patent and Trademark Office, but its main focus seems to be changing the tone of debate in an environment where patent law is sometimes seen as beyond repair.

"The rhetoric's frankly gotten out of hand."

Members of the organization believe that as "emotion and rhetoric about the patent trolls" becomes more strident and cries that the patent system is broken proliferate, "the rhetoric's frankly gotten out of hand," says PAI senior advisor David Kappos, a former US patent office head. The group supports reform, but only in "careful and calibrated ways," in contrast to people it sees as opportunists looking to throw out the patent system in the guise of change. Right now, its membership consists of Apple, DuPont, Ford, GE, IBM, Microsoft, and Pfizer, which hold some of the most valuable patent portfolios in existence. These companies might end up holding different opinions on the particulars, but they'll all push for corrective, not transformative, reform.

One of the areas in which they've all come together is software patents — a particularly controversial category that's been criticized as tantamount to simply patenting an idea, since inventors need only describe the process they're following. In 2012, as Samsung appealed the loss of a patent infringement suit brought by Apple, Kappos defended software patents, telling critics to "give it a rest." His opinion hasn't changed. "This group agrees that there should be no discrimination against the kinds of subject matter that can be patented. It makes no sense to have a rule that for instance, software can't be patented," he says. "If it's a great innovation, it should be eligible for patent protection whether it happens to be implemented in software or not." He also references the biotech industry, including gene patents, which the Supreme Court declared partially invalid last year.

On its face, the group looks a lot like a lobby, not dissimilar to the Internet Association or any number of other trade groups. When asked, though, Kappos flatly rules out any involvement with Congress. PAI doesn't even have a firm overall opinion on the Innovation Act, a patent reform bill that passed the House in 2013 and is being taken up by the Senate Judiciary Committee this week. Members Microsoft and IBM, however, were instrumental in killing a section of the bill that would have preserved a cheaper and faster method of declaring patents invalid. "The partnership has not formed any view that the bar for patentability needs to be changed in a way that would cause patents that are currently valid to become invalid," says Kappos. 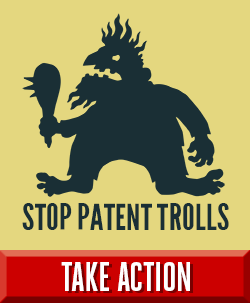 The EFF's rendering of a patent troll.

Instead, PAI will focus on changing the public image of patent holders, relying on op-eds, speeches, and the conviction that more companies will join. And that means taking aim at the figure of the patent troll, which has literally put a nasty face on the industry. We'll see companies "entering the public debate in places where this negativity has sunk in, with pictures of these ugly dwarves that we now call patent trolls," says Kappos. "We'll be out there to point out, you know what? We actually have a great patent system. And we're pro-reform, no problem with that at all, but we've got to be smart about the reforms, and we shouldn't be demonizing any entrants in the system."

So if PAI doesn't want to to make it easier to declare patents invalid, and it wants only mild changes to software patent standards, what reforms does it actually support? Kappos mentions the transparency sections of the Innovation Act, which would require companies to register changes in patent ownership and list anyone with a financial interest in the patent, cutting through the thicket of shell companies that patent trolls use to obfuscate their cases. In general, however, it wants penalties for breaking the rules to be moderate.

"You know what? We actually have a great patent system."

Microsoft and Apple have been on both sides of the patent troll debate. Earlier this year, Apple said in a Supreme Court brief that it faced hundreds of often frivolous patent claims that ran up its legal bills. Microsoft, like many large companies, faces similar claims. But the pair were accused of trolling when the Rockstar patent consortium, to which both belong, sued Google over the Android operating system. Google, which only recently started to build up its patent portfolio, has been more outspoken about the need for patent reform.

While PAI tries to make us love patents, the issue of reform will be decided in Congress and the courts over the course of 2014. The Senate will debate its version of the Innovation Act, and the Supreme Court will hear several cases that could set a precedent for how to define patents and how to punish infringement. Right now, patent holders and reformers are closely watching Alice Corp. v. CLS Bank, which will determine whether a set of financial software patents are invalid and could have repercussions for software patents on a larger scale. The patent system is almost certainly going to change in 2014, but the question is how much, and members of the PAI are hoping to make sure we don't move too far from the status quo.

More from this stream Fixing the patent system: government and industry push for reform