FireChat launches on Android, letting users text nearby friends even without cell service

Share All sharing options for: FireChat launches on Android, letting users text nearby friends even without cell service

FireChat launched two weeks ago on iPhone to much fanfare, since it let you chat anonymously with people nearby even without a cell signal. The app makes use of some crazy iOS 7 technologies developed by Apple to let you talk locally over Wi-Fi and Bluetooth, and with each additional local user, the network gets bigger. FireChat hit the top 10 in the App Store's Social Networking category in over 80 countries, leaving Android users wanting.

It would appear that FireChat would only work on iOS, considering its use of Apple's messaging protocols, but behind the scenes, app developer Open Garden was seemingly also working on an Android version. The app is launching today in the Google Play Store. 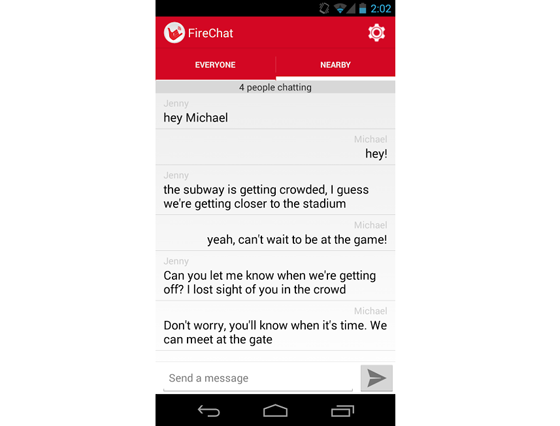 While any iOS developer can use Apple's "multi-peering" API to create an app similar to FireChat, the company's Android app operates on a very different and proprietary mesh networking technology it developed internally. This means that FireChat for iOS and Android can't interoperate quite yet, according to the company. Open Garden's proprietary technology means that while FireChat clones might pop up pretty soon on iOS, the company should find itself with much more of an edge on Android. It previously launched an Android app that lets you wirelessly tether your phone to your computer using the same mesh networking tech.

There aren't many scenarios where chatting with others locally makes a ton of sense, but for chatting in a library, on an airplane, in a small town, or in a sports stadium, FireChat could find itself playing a very important role.