Until now, treatments for drug overdoses have been entrusted to health professionals and police officers, but today the FDA approved the first drug-delivery device made for civilians to administer an overdose antidote to victims. The device, called Evzio, is a credit-card sized dispenser that contains a needle, which is used to administer the antidote naloxone to someone who has suffered a drug overdose.

The FDA describes the device working similarly to automated defibrillators: when turned on, Evzio gives the user verbal instructions on how to inject naloxone in a victim. It even comes with a trainer device that lacks a needle and medicine that people can practice with so they get familiar with the process before they ever use it. However, the FDA does note that while naloxone does help counteract the effects of an overdose from opioids like heroin, it is not a substitute for medical care.

Will people use it wisely?

There's no word on how much Evzio will cost when it becomes available to the public, and that's partly because the consumer price for naloxone has yet to be decided. The AP reports that the device's manufacturer kaléo is currently working with health insurance providers to get broader coverage for naloxone. Kaléo also claims that naloxone could act as a treatment for other types of drug overdoses, and unexpected drug interactions. 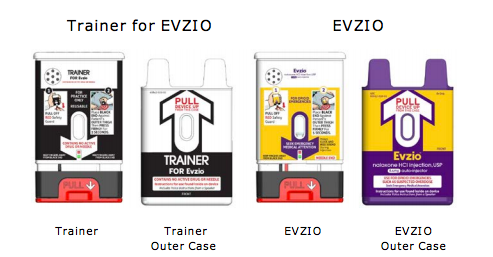 Lawmakers have their reservations about naloxone being readily accessible to everyone. Maine Governor Paul LePage vetoed a bill last year in his state that would have let healthcare professionals prescribe naloxone to families and caregivers of drug addicts so they could dispense it during emergencies. He claimed it would provide "a false sense of security that abusers are somehow safe if they have a prescription nearby."

America's growing drug problem can't be ignored much longer. The CDC reports that the number of people who die from drug overdoses has steadily increased over the past 11 years, rising from 16,849 deaths in 1999 to 38,329 in 2010. FDA Commissioner Margaret A. Hamburg wrote in a statement that rather than Evzio being a solution to a public health crisis, it should be seen as a tool to help people who could eventually receive more treatment for addiction. "While the larger goal is to reduce the need for products like these by preventing opioid addiction and abuse," Hamburg said, "they are extremely important innovations that will help to save lives."