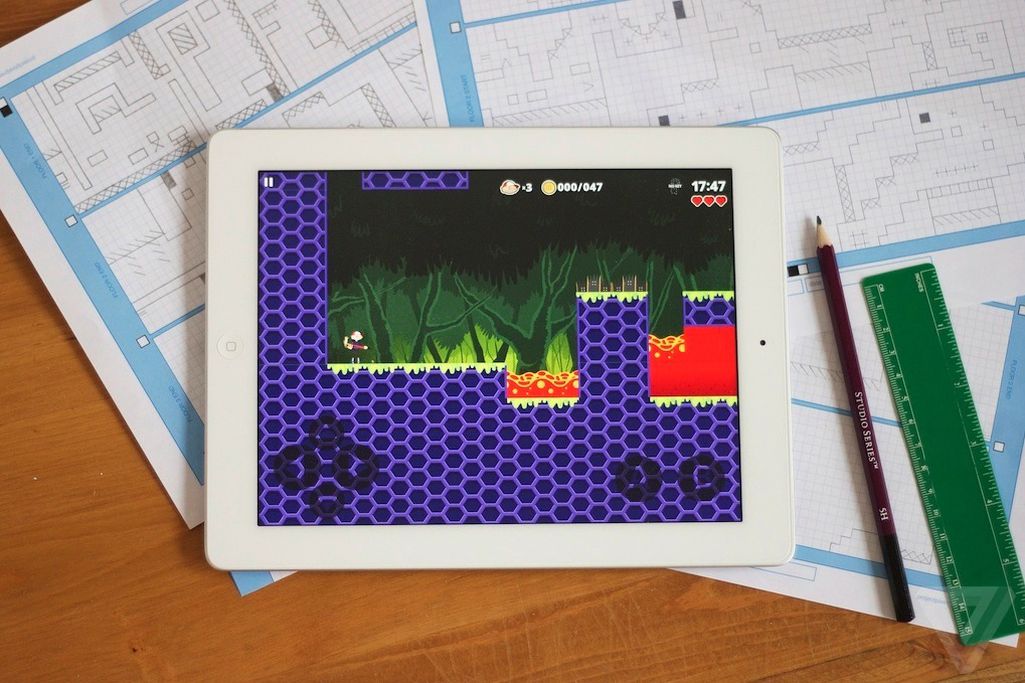 When I was a kid, video games didn't end the moment I turned off the NES. If I wasn’t holding a controller, I had a pencil in my hand, furiously scribbling out maps of Hyrule or alien caves for Samus to explore in Metroid. But since I didn't know how to code and wasn't much of an artist, those ideas stayed in my notebook, and I never got to explore them on my television.

For kids growing up today, though, that could be different. Last year a project called Pixel Press raised more than $100,000 on Kickstarter in order to build a series of apps with the ambitious goal to let you turn your pen-and-paper drawings into actual video game levels. You simply sketch out an idea on some graph paper, snap a photo with your iPad, and then transport your creation into a level editor where you can flesh it out with power-ups and some added visual flair. It's a compelling idea, especially for someone like me who never bothered to learn coding and hates futzing around with video game level editors. It also sounds outrageously ambitious and more than likely too good to be true.

Today Pixel Press is launching its first app on iPad (with iPhone and Android versions to follow). It’s called Floors, and it focuses exclusively on letting you build Super Mario Bros.-style 2D platforming levels that you can then play and share with others. The crazy thing is that, most of the time, it actually works. And playing a level that was once a pencil sketch feels a bit like magic. 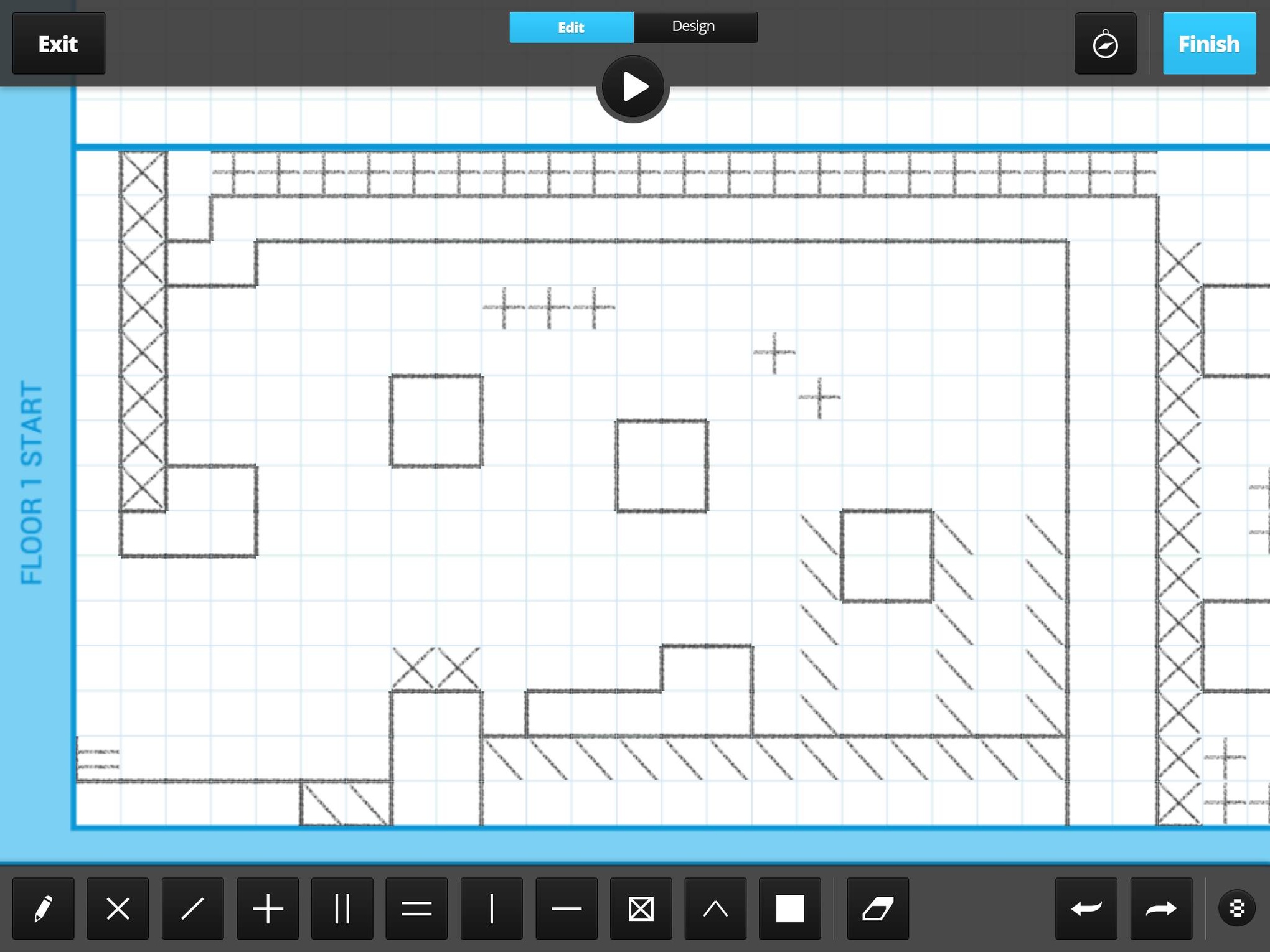 The first thing you'll notice is that Floors requires precision. You can't just scribble down your wildest ideas and then upload it to the app; first you'll need to print up some specially designed graph paper, which features three sections and a bunch of tiny notches around the edges that serve as guidelines for your iPad's camera. In addition to the paper, which you can print using any printer, you'll need three tools: a pencil, eraser, and ruler. 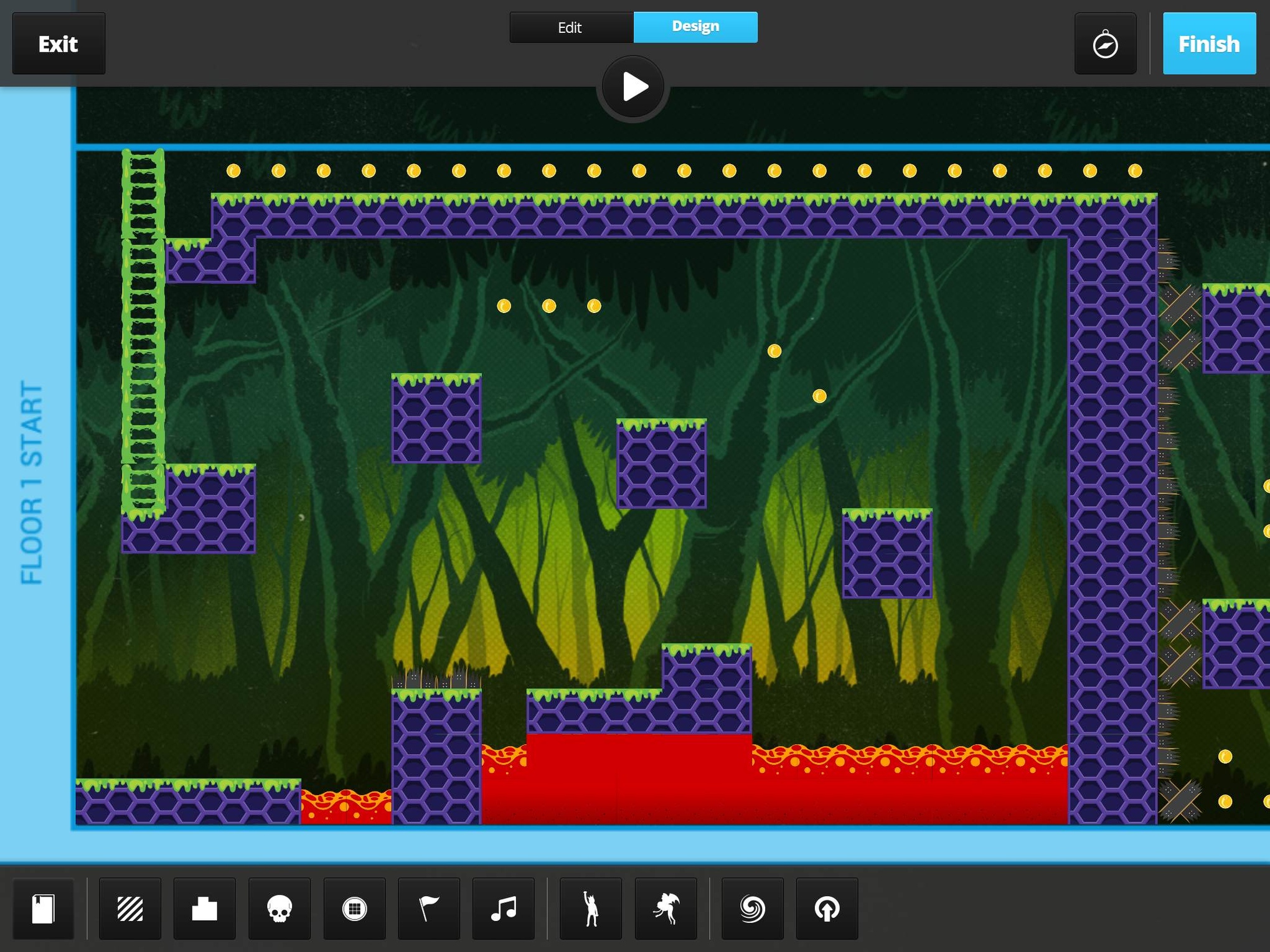 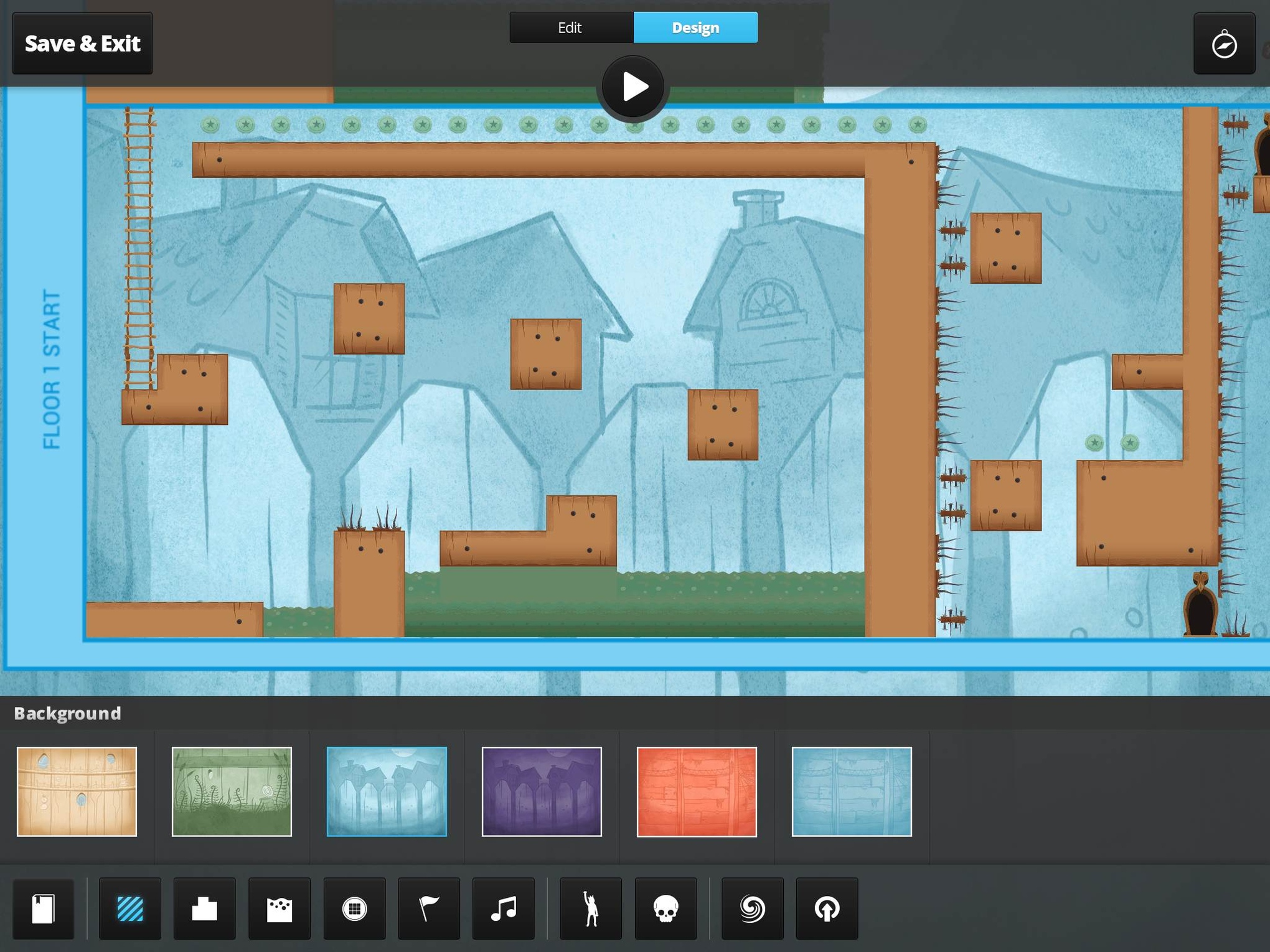 Everything you can create, from a simple platform to a fireball-spewing lava pit, is represented by a specific symbol. Drawing an "x" will create a pit of spikes, while a "+" sign is used to represent collectible coins. Each of these symbols must be drawn neatly within a single square on the graph paper (hence the ruler). Everything your character can do will be familiar if you’ve ever played Sonic or Mario. You can run, jump, and even attack enemies, and the levels can feature things like moving platforms, patrolling bad guys, and deep pits full of spikes or acid. But building the levels is a time-consuming process, and if you don't do things the proper way, you can waste a lot of time. I learned that a lot early on in my budding game-design career.

My first problem was my printer, which cut off an edge of the graph paper. I proceeded to draw my level anyways, but because the tiny notches were gone, the app couldn't recognize my creation, rendering an hour or so of work useless. My next attempt fared a bit better: the app was able to recognize the paper with no issues, but because my pencil marks weren't dark enough it failed to actually see the tiny details of my level. Ladders were turned into spiky walls, and where I drew moving platforms there were only giant chasms you couldn't jump across. From then on I vowed to push down really, really hard when drawing.

Not only do you have to memorize all of Floors’ different symbols and rules, you’ll also need to acquaint yourself with some of the nit-picky parts of the technology. But after those two failed attempts, which probably totaled about two and a half hours of sketching and scanning, an amazing thing happened: it actually worked. My drawings became a video game.

I haven't yet had a flawless experience — there's always something the app misses when scanning, especially with more complex levels. I’ve had entire structures disappear because a single line was too faint for the app to see, and portals that would transport you nowhere because the exit wasn’t filled in all the way. Once a runway full of coins was turned into a deathtrap of flowing lava. But I got close, and fixing errors from the app itself is easy enough. You simply tap on the offending block and select the proper symbol from a menu. It can be tedious when there are a lot of things to fix, but it’s not such a big deal with only a few. 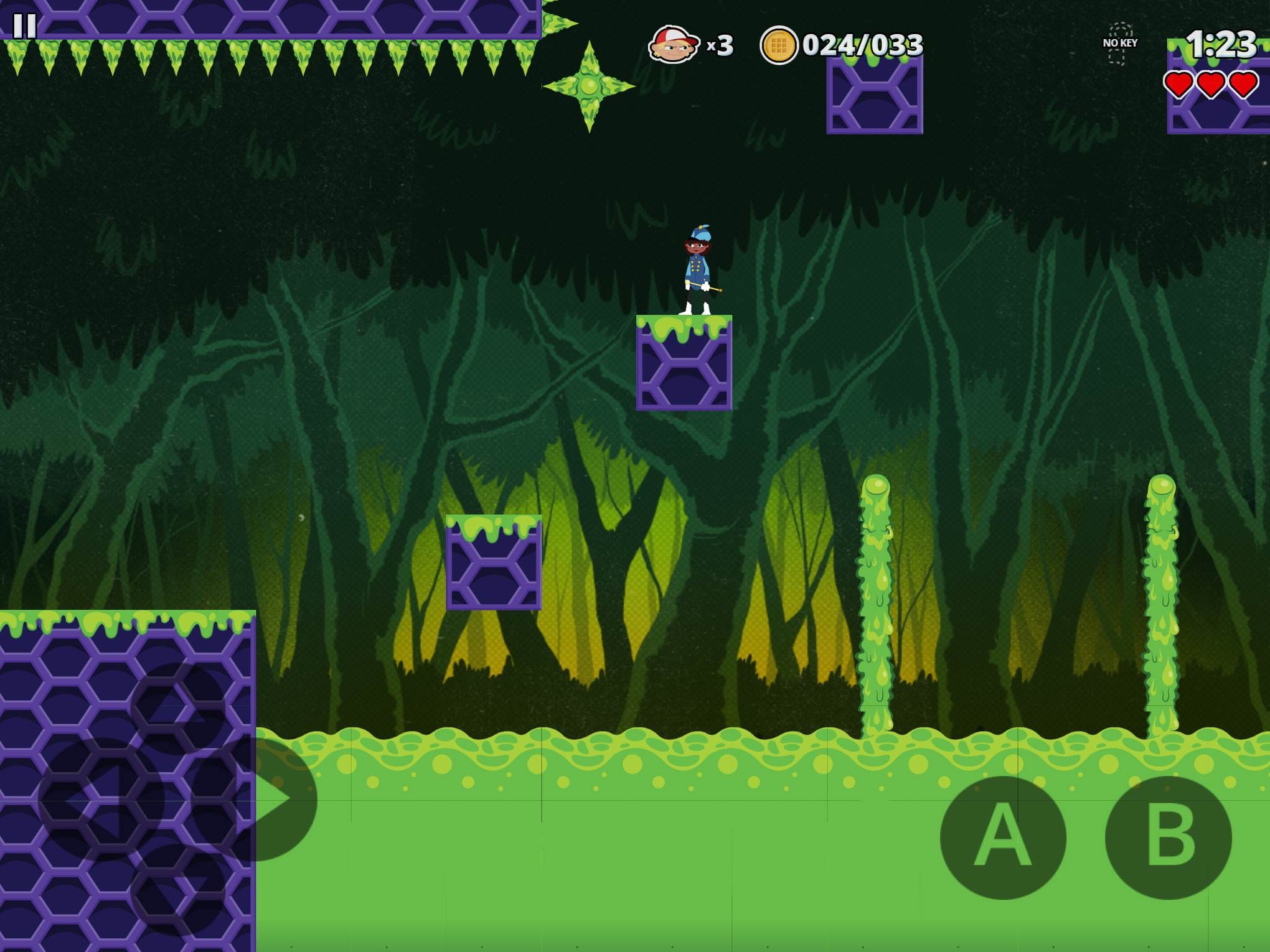 One of the best features of the level editor is that you can swap from building to playing at any time. This lets you rapidly test out your ideas to see how they work from a player’s perspective, and turns the act of building a level into a fantastically iterative one. Playing a half-finished level also makes it easier to spot big problems like a gap that's too big to jump over, and I found myself constantly jumping back and forth between the two modes. The editor lets you add things like enemies and power-ups, as well as customize the look through a pair of pre-built visual themes with a distinctly Saturday morning cartoon feel (more are expected to launch as in-app purchases). You can also share your creations with the app's arcade mode, which highlights some of the better user-created levels much like in games like LittleBigPlanet and Project Spark. It's also a great place to generate ideas by looking at what other players have made.

Floors doesn't let you create entire games, just levels. But while you have relatively basic options at your disposal, you can still build surprisingly complex stages. Each of the three sections has a lot of space, letting you craft dense, intricately detailed levels that will take some time for players to get through. And power-ups like the jetpack, which lets your character fly for a limited time, open up a whole new range of possibilities. The one thing Floors doesn’t manage to get around is the challenge of making a platform game work perfectly with touchscreen controls. While the on-screen buttons are responsive, actual movement and jumping feels loose and floaty, lacking the precision of a Nintendo game.

Floors can be a frustrating app. While it works most of the time, getting to the point where it reliably recognizes your inputs requires some annoying trial and error. And sometimes the tiniest mistake, like failing to fully erase something, can result in a level that doesn't match what you drew. That's not even including all of the time it takes to memorize the different symbols and what they do. But the learning curve is worth it. Seeing something you drew with a pencil transform into an actual, playable game is a pretty amazing experience — even if it takes some work to get it working right. It's also free to download, and all of the key features are available even if you don't spend anything. Right now the only things you can buy are additional enemies and power-ups, though more in-app purchases are coming to help expand the experience. "You're almost buying toys for a toy set," says Pixel Press founder Robin Rath.

"We wanted to reinvent the wheel with each new genre."

Pixel Press is a platform that will keep expanding. While Floors only lets you build platform games, the project’s roadmap includes at least two more apps designed for different genres. Quest will allow for larger worlds and puzzles so that you can build a Zelda-style adventure using multiple sheets of paper, while the aptly named Tracks is for building overhead racing games. Both of these apps will likely launch sometime next year. "We felt like we wanted to reinvent the wheel with each new genre, based on what we learned from the previous one," says Rath. Floors may be simple, but through content updates and new apps, Pixel Press could turn into a very powerful tool.

Nintendo might not be building the Metroid of my dreams, but there could soon be an app that lets me do it myself.