Apple documents show need for bigger screens: 'consumers want what we don't have'

Apple documents show need for bigger screens: 'consumers want what we don't have'

Internal Apple documents from last April shown in court today paint the picture that the company was scrambling to identify and determine ways to compete with devices running Android, as well as keep sales of the iPhone from petering out amid growing competition.

"Consumers want what we don't have."

Pages from a 2014 planning document last April, shown during a cross-examination of Apple's marketing chief Phil Schiller, noted that smartphone growth rates were declining, something that could impact iPhone sales. Worse yet, the document said, was growing consumer interest for less expensive, larger-screened smartphones, with a headline on the page reading "consumers want what we don't have."

Schiller downplayed the presentation, the rest of which has been sealed by Apple's lawyers, saying it was for an off-site meeting with "a few sales people," and not something he attended. Samsung's attorney Bill Price went on to pull up an additional page that said it was a "switchers battle in developed markets," and that "in two years, our target Android switcher will be used to a display with much larger than four inches."

In Apple's case, the company is currently topped out at four inches with the iPhone 5S and iPod touch, through recent reports have suggested it's gearing up production for of two larger phones: one at 4.7 inches, and another with a 5.5-inch display. 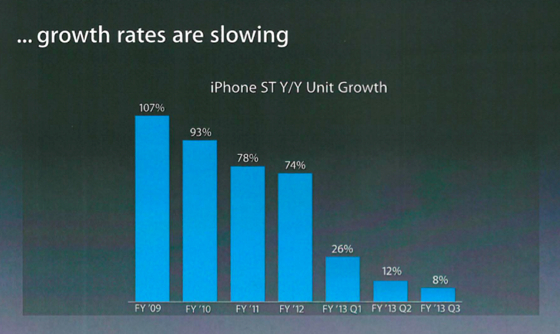 Alongside the consumer surveys and planning pages, Samsung used its time with Schiller to highlight his email conversations with other top Apple executives and outside agencies about what was viewed as a markedly effective ad campaign by Samsung. That included a Super Bowl commercial by Samsung that left Schiller with a sense of urgency.

"These guys are feeling it."

"‘These guys are feeling it,' (like an athlete who can't miss because they are in the zone) while we struggle to nail a compelling brief on iPhone," Schiller wrote in a perturbed email to James Vincent from Apple's outside ad agency Media Arts Lab. "That's sad because we have much better products." In another correspondence, Schiller told Vincent "I now have Apple board members asking 'what is going on with advertising and what are you going to do to fix it. The team is too good to be in this spot."

Apple's concern over the Samsung "next big thing" ads had been at issue earlier in the week with evidence presented by Samsung in its opening statements. Samsung pushed the matter in its cross-examination of Schiller — pulling up a related email thread between Schiller and Apple CEO Tim Cook — where Schiller expressed unhappiness with Media Arts Lab's response to his concerns.

"We may need to start a search for a new agency."

"We may need to start a search for a new agency," Schiller wrote in an email to Cook. "I've tried hard to keep this from being the situation, but we are not getting what we need from them and haven't been for a while."

Speaking once again with Apple's own lawyers, Schiller said he frequently butted heads with Media Arts Lab over various issues, but that it had been more of a dialogue.

Once more, with feeling

At stake in this trial is whether Samsung copied Apple's patented features when it sold some 37 million phones and tablets beginning in August 2011. This trial, which began on Monday, involves five feature patents from Apple, and two from Samsung. An eight-person jury will determine which devices infringed, with Apple asking for $2 billion in damages, and Samsung asking for $6.9 million.

Up until today, Schiller's testimony was a nearly identical to his appearance in the 2012 trial between the two companies, including anecdotes about making the first call from the iPhone during Apple's MacWorld presentation in 2007, and the need to educate consumers on how to use it in its early TV commercials.

"When this ad ran, people didn't have the opportunity to use an iPhone for themselves," Schiller recalled earlier this week. "They'd never used anything like it. We had the challenge of [showing them] how to use everything in a 30-second ad." That suggestion plays to Apple's argument that it was the first to create several features, including sliding to unlock, that it says Samsung ripped off in its own devices.

In testimony, Apple engineer Greg Christie reprised pre-trial interviews he did last week, describing the genesis the iPhone as well as some of the early features like clicking on news links in the browser. That's something Apple relied on former iOS chief Scott Forstall to do in 2012, though Forstall ended up being fired from the company just three months later. Without adding too many more details from his conversation with The Wall Street Journal last week, Christie described the end goal of it all to create a product for "normal people" to use, and remembered how his first meeting about the project with Forstall began.

"Forstall came in, and shut the door behind him. Then said ‘how would you like to do a phone?'" Christie recalled. "‘Well,' I said, ‘sure — you bet.'"

Update on April 4th at 9:08PM: This post has been updated with source documentation of the email threads, and corrected to note that one of the conversations was between Apple's Phil Schiller and the company's outside advertising agency.