Jitters from your fritters

The cup of coffee you drank this morning underwent a complicated process to go from solid to liquid, one that likely involved boats, planes, trains, automobiles, and maybe even a human being at the very end. But it all started as a coffee berry grown on a plant. They're edible, but often discarded as a byproduct when the coffee bean is taken out and dumped into rivers or turned into fertilizer by legions of hungry worms. But now a pair of companies are trying to turn it into something entirely different: flour with a caffeinated kicks.

Often eaten by worms, not humans

It's called Coffee Flour, and it's the creation of Intellectual Ventures and the recently formed CF Global Holdings, an ominous-sounding company led by Dan Belliveau, a former Starbucks logistics expert. You probably recognize Intellectual Ventures for its public image as a "patent troll," a company that's made a business out of patents and not products. That's an apt term for the most part: Intellectual Ventures has largely either struck licensing deals or gotten into legal battles with some of the biggest names in technology, rather than making and selling the inventions it creates or acquires from inventors.

But a lesser-known part of IV's business is the "Invention Development Fund," a collection of individuals, schools, and businesses that exchange some of the ownership of their creations for access to IV's growing pool of resources. That's just what happened with Coffee Flour, which grew out of a business pitch from Starbucks veteran Belliveau to Ken Poppe, who spent more than five years at Starbucks but is now IV's head of the Invention Development Fund in the US. The pair are trying to turn an estimated 16–17 billion pounds of the fleshy mess into something humans will pay to eat.

"In looking at coffee supply chain and doing work with largest coffee suppliers, it struck us that there had to be a better way with the coffee cherry pulp," says Poppe. "Efforts that have been done to date don't have the kind of scale to deal with this annual byproduct."

That process of milling the sun-dried coffee cherries to a dry flour suitable for cooking is a closely guarded secret, and one Poppe says is covered by seven different patents the company has filed for. In its current plan, coffee farmers simply bring the cherries to a system of local mills that will do the processing after the fruit has been dried. The farmers get paid for that, though Poppe wouldn't specify how much, nor did he mention what kind of investment IV had made in CF Global.

According to the two companies, the end result is a flour that doesn't taste like coffee, but has a "unique flavor with floral aromas" that varies depending on where the beans came from. It also has five times as much fiber as whole wheat flour, and three times as much iron as fresh spinach. While not a consumer product yet, it's being used in Seattle restaurant Crush, which became a test bed for earlier iterations. The restaurant has taken the flour, which is gluten-free but works best combined with standard flour, from a concept into something that's regularly served in both main dishes and pricey desserts.

"Bread was another big breakthrough."

"We started off with very basic recipes like making a cookie," says Andrew Fedak, CF Global's co-founder. "The best ‘aha moment' was that it worked in pasta and breads. We thought it would be too brittle, but bread was another big breakthrough." 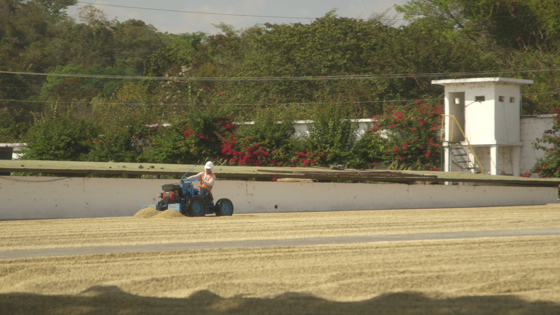 For IV, it's not the first time the company's dabbled in food and food processing. Co-founder Nathan Myhrvold, who is Microsoft's former chief technology officer, authored Modernist Cuisine, a set of five cookbooks that weigh 52 pounds and cost $625. In the same labs where IV's employees prototype new things to patent, Myhrvold's got a test kitchen filled with gleaming appliances and bubbling sous-vide machines. IV has also partnered with other companies to optimize milk production on cows and determine meat grading using technology instead of human intuition. A grander project involves printing out nutritionally-balanced meals on networked food printers, something that's been compared to the replicators in Star Trek.

A secret ingredient for other foods

IV has also filed to trademark the name Coffee Flour, something that could end up the brand name of a product you'd find at the store. But that may not happen until sometime next year, if at all. Instead, the flour could become an ingredient in other items — caffeine-enhanced pancakes, perhaps — as opposed to a main attraction of its own. But those seeking a supercharged breakfast should take note: "It's substantially less caffeine than brewed coffee," Fedak says. "It doesn't react the same way, either. It's a slower, and not quite as heightened a stimulant."