My name is Dan Seifert and I’m addicted to cable TV.

Last fall, I tried to break that addiction. I became one of the growing number of Americans to cancel their cable TV service. I went from a couple hundred channels to zero. I’ll have lots of free time, I said. Maybe I’ll even catch up on my ever-expanding Pocket queue. I bought a Roku 3 and signed up for Netflix, Hulu Plus, and Aereo, so I could catch both the Super Bowl and the next season of House of Cards. I became a cord-cutter.

But my cable-free life didn’t last very long. Less than six months later, I was on the phone with my cable company scheduling a visit to have everything hooked back up. A combination of a sweetheart “come back to us” offer from my local cable provider and the frustration of not being able to watch the things I actually did want to see (any customer of Aereo knows trying to watch something like the Oscars live is an futile endeavor) sent me running back into the comfortable arms of channel surfing. I was back on the sauce.

Now Amazon is trying its hand at helping me to break my addiction. Its new Fire TV is the latest media-streaming box expected to take down the cable monopolies. It has stiff competition from Roku, Apple, and even Google, but Amazon promises to offer a better experience than anything I’ve seen before. Oh, and it has games. Real games that are fun to play, not the ultra-simple games that are available on the Roku 3. At $99, it’s almost an impulse buy, and if it can truly let me cut the cord, that upfront cost is nothing compared to what I save by canceling a monthly cable bill.

I’ve got the the Fire TV hooked up to my TV and it looks like it has promise. I might be able to kick this habit after all.

Amazon’s version of a media streamer is much like Apple’s or Roku’s: a basic black box that discreetly sits on my entertainment center. It’s a little larger and slightly thinner than the Apple TV or Roku 3, but that matters little — I just plugged the thing in and forgot about it. Aside from a small white LED on the front of the box to let me know it’s on, that’s it for alerts and design. The Fire TV isn’t expected to be a showpiece of my entertainment center, like a PlayStation 4 or Xbox One. It’s just supposed to blend into the background and do its job. Because really, this isn’t a story about hardware. This is about Amazon getting as many of its services as possible in to my living room. 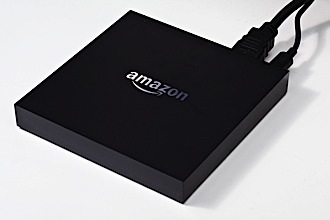 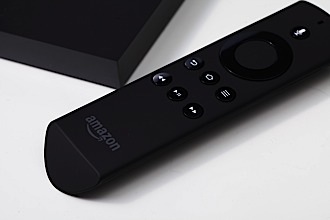 Setting up the Fire TV is a breeze: once I plugged it in and put in my Wi-Fi password, it launched into a video tutorial demonstrating its many features (starring a bizarro normcore Doug Funnie character). As with its Kindle Fire tablets, Amazon preloaded my account on the Fire TV before it shipped it to me, so once the tutorial finished (you can’t skip it, I tried), all of my Amazon content was there right in front of me. Every TV show and movie I’d purchased from Instant Video, every photo I’d uploaded to Cloud Drive, all there for my consumption. (Starting next month, every song I upload to Amazon’s Cloud Player will be there too.)

The interface will look familiar to anyone that’s used a Kindle Fire tablet: it’s a basic grid with categories on the left and content on the right. Unlike the Roku 3’s bright and colorful themes, the Fire TV’s interface is mostly dark and understated. It’s easy to navigate and responsive thanks to the Fire TV’s powerful hardware, and most importantly, it’s easy to read from my couch. Needless to say, it’s a much better interface than anything a cable box has ever offered. 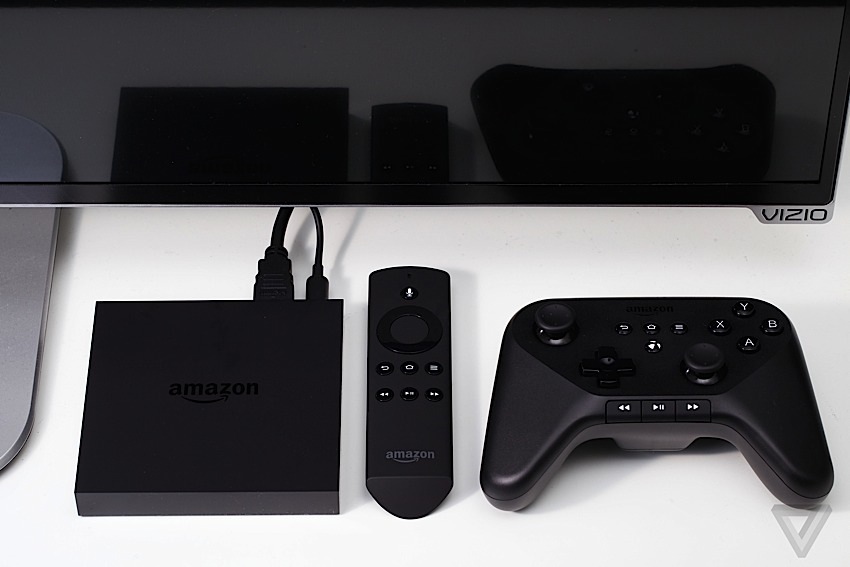 In addition to all things Amazon, the Fire TV has apps for Netflix, Hulu Plus, Watch ESPN, Crackle, and many others. The apps are very similar to their Apple TV or Roku counterparts, and Amazon says that each provider is responsible for their app’s interface — it’s not dictating a particular look. Most of the apps are perfectly okay now, but that might not be the case for every app in the future.

Curiously missing are HBO Go and Aereo, though Amazon tells me it is working with HBO on an app for the Fire TV. There are no options that I can find to watch live content. And it’s likely that the Fire TV will never have the ability to access content purchased from Google Play or iTunes. As with the Kindle Fire tablets, if you already live in Amazon’s world of cloud storage services, the Fire TV offers quite a bit. If you don’t, don’t expect to see much in the way of photos or music on the Fire TV.

The Fire TV’s best experience is with content purchased or streamed from Amazon itself. Amazon does a lot of background processing to anticipate what I’m going to watch next and preload it for instant gratification when I hit the play button — the Fire TV has effectively eliminated loading for Amazon’s content. The interface is snappy as well: scrolling and paging through the menus is a lot easier and a lot less frustrating than on other media boxes. 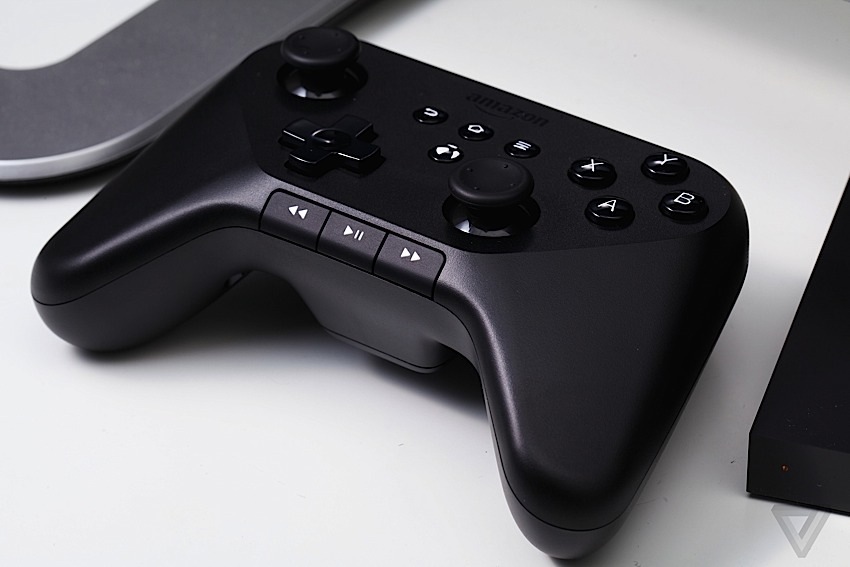 Amazon’s X-Ray service, which ties into IMDb, gives me detailed information about what I’m watching and if I had a Kindle Fire tablet, I could control playback and check out X-Ray features right on that. Fire tablets also can act as second-screen devices while playing games, letting a second player assist or control other aspects of the game. Amazon’s Whispersync service tracks my activity, so I can resume playback or load all of my game’s progress on a different Amazon device instantly. The upcoming Cloud Player music integration offers features like scrolling lyrics and other facts about the currently playing music. I can take a picture, upload it to Amazon’s Cloud Drive, and see it almost instantly on my TV. It’s almost like Apple TV’s Airplay feature, but not as simple or convenient to use.

But if I’m watching movies or shows in Hulu Plus, or Netflix, or any other non-Amazon service, I miss out on a lot of what’s special with Fire TV. If I view content from a variety of sources, say House of Cards on Netlfix and Community on Hulu Plus, I have to do a lot of bouncing between services. The "Recent" feed, which is the first thing displayed on the Fire TV, is a great place for Amazon to solve this problem except it doesn’t have what I’ve recently watched on Netflix, Hulu, or others.

You control everything with a basic wireless remote that talks to the box over Bluetooth. It’s not much different than the remotes that come with the Roku 3 or Apple TV: it has a four way controller and basic buttons for play / pause, fast-forward, rewind, menu, back, and home. There’s also a button at the top of the remote to activate Amazon’s new universal voice-search function. 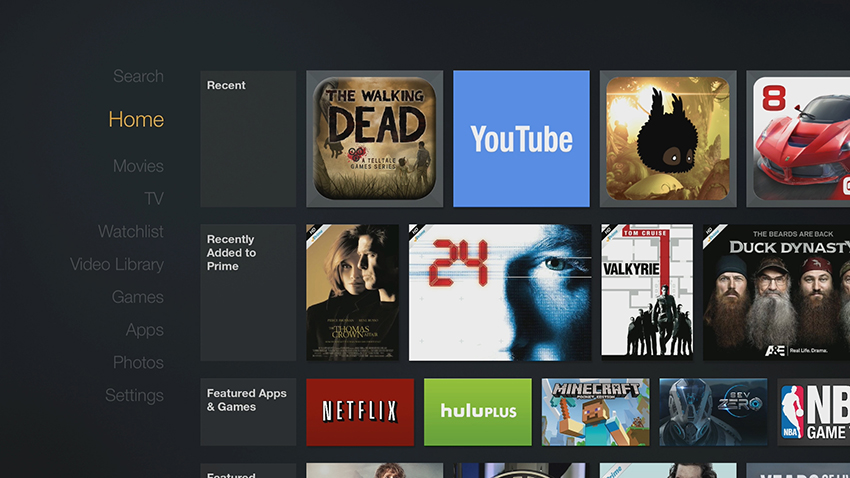 Universal search is impressive, and it’s even better when I use the voice search to call up whatever I want. I push and hold the remote’s button and say "Scarlett Johansson" and boom, all of her movies are there right in front of me. I can do the same for whatever I’m looking for: actors, games, TV shows, music, directors, the list goes on. Fast and usually accurate, it might be the best voice search utility I’ve ever used — even better than Google Now on Android. Keying in searches with the remote is a major pain on any set top box, so it’s great that Amazon is offering an alternative. 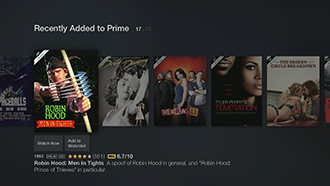 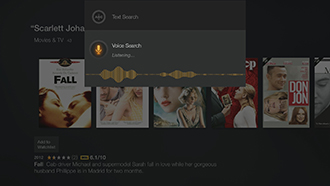 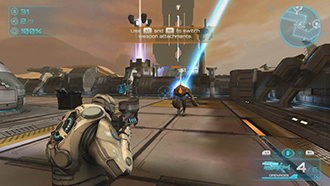 But once I’m inside an app, I can’t use the voice search. And Amazon’s "universal" search is limited to its own content and Hulu right now. That means that every time I look up something to watch on Netflix, I’m back to pecking away at letters with the little remote. That’s no better than an Apple TV or Roku box. Amazon says it plans to integrate more services into universal search in the future, but that requires cooperation from those services — and Amazon isn’t saying exactly when that will happen.

Amazon's voice search is fast, easy, and accurate, but limited to Amazon's own content

While much of the media experience on the Fire TV is the same as I’ve seen before, the big differentiator is the fact that it can play games. Amazon is selling an optional Bluetooth game controller to go along with the Fire TV. It’s $39.99 and is styled like most third-party Xbox controllers: there are two joysticks, a d-pad, some buttons on the front, and triggers on the rear. The controller is rather generic-looking, and the buttons are a little mushy, but it’s more than adequate for the types of games that the Fire TV offers.

Unlike the Roku’s simplistic games, the Fire TV’s games have depth, complexity, and in some cases rather impressive graphics. There are games developed in-house by Amazon, such as the Halo clone Sev Zero, as well as a number of popular Android games, such as Asphalt 8 and Badlands. Load times for larger games can be a bit tedious, but for the most part, performance is impressive. Frame rates are consistent and smooth, and while the Fire TV won’t give the Xbox One or PlayStation 4 a run for their money, I had more fun gaming on it than I expected. It almost goes without saying, but if you’ve been considering an Ouya or other Android gaming platform, you should probably just pick up the Fire TV instead.

The Fire TV is the best media streaming box you can get, but it's not much more than that

For all that the Fire TV offers in performance and auxiliary features, it doesn’t do anything to push the envelope, to truly give you a reason to cut the cord if you’re on the fence. The Fire TV doesn’t give me access to any more channels or content (and in some cases, it has less) than I could get with a Roku, an Apple TV, or even a Chromecast. (Amazon’s own content is even accessible on the Roku.)

Thanks to features such as X-Ray, voice search, photo and music integration, the Fire TV is by far the best way to watch content from Amazon’s own Instant Video service. Add in the fun and engaging games, fast performance, and access to much of the same content and services you get on the other platforms, and it’s easy to see why the Fire TV replaces the Roku 3 as my set top box recommendation. But it doesn’t give its best features to its whole ecosystem, and if you already own an Apple TV or a Roku or a Chromecast, there’s little reason to invest in Amazon’s option.

For me, Amazon could have really changed the game by cutting deals to deliver live content and shows at the same time they are aired on cable and network TV. I was hoping that Amazon would give me what I needed to cut the cord once and for all and not look back, but that’s just not the case. Instead, it just gave me another box to watch the same content I can see plenty of other ways. And that means I’m likely going to be sticking with my cable subscription for the foreseeable future.

That reminds me, a new episode of Suits is airing tonight. Time for my next hit.