When the Soviet Union officially collapsed in December, 1991, the New York Times published a lengthy, obituary-style piece about the former superpower, describing it as "a nation straddling two continents and two cultures, forever torn and forever fired by the creative clash at the fault line of East and West." The end of the Cold War was supposed to temper that divide, as Russia gradually integrated with the West. But nearly 25 years later, that fault line now seems as pronounced as ever.

Russia's annexation of Crimea last month raised tensions across the globe, leading to the most direct confrontation between Moscow and Washington since the Cold War. With Russian soldiers amassing along the Ukraine border — raising the specter of further incursions — there are fears that the dispute could lead to a prolonged standoff, with major ramifications for both the West and Russia. It's not quite "Cold War II," experts say, but it's definitely frosty.

"This is a whole new ballgame in the post-Cold War period."

"What we've seen in recent weeks is that Russia is prepared to disregard the terms of the post-Cold War settlement, and unilaterally pursue its own interests regardless of the impact on relations with its immediate neighbors — seemingly in defiance of any reaction from the West," says John Laugh, associate fellow at Chatham House, a London-based think-tank. "This is a whole new ballgame in the post-Cold War period."

The US and its allies have unilaterally condemned the annexation of Crimea as illegal, while Russia insists that the peninsula's referendum to secede from Ukraine was democratic and fair. US officials have said they have no plans to send troops into Russia, and have so far chosen to pressure the Kremlin through economic and diplomatic channels. President Barack Obama and his Russian counterpart, Vladimir Putin, have already exchanged targeted economic sanctions, and Russia was excluded from a meeting of the elite G8 group of countries last month. This week, NASA suspended most of its operations with Russia's space agency, citing Russia's "ongoing violation of Ukraine's sovereignty and territorial integrity."

Western countries have said they will reinforce troops in Eastern Europe following Russia's annexation, though NATO has drastically downsized its military presence in Europe since the fall of the Berlin Wall, when many troops were stationed to ward off potential Red Army threats. Some fear further economic sanctions may only embolden Putin, who has already used Obama's response to galvanize his domestic supporters.

"all it can do is raise walls."

"Given the West's unwillingness to resort to military force, all it can do is raise walls around Russia in the hope that international isolation will eventually bring about a change of regime," says Sergey Radchenko, a Cold War expert at Aberystwyth University in the UK. "I think it's a self-defeating strategy, because it leaves Russia embittered and feeds into domestic nationalism."

The effects of targeted sanctions handed down against high-ranking Russians have already been felt across Russia's stock markets and banking sector, though a broader sanctions war would have serious implications for the West, as well. The European Union is far and away Russia's largest trade partner, and many European countries rely heavily on Russian imports of oil and natural gas. According to the Energy Information Administration, Europe accounts for 84 percent of Russia's oil exports, and 76 percent of its gas exports. Further restrictions on finance and trade would have immediate impacts on both parties, and Russia has shown it's willing to use energy supplies as political leverage. This month, Russian energy giant Gazprom announced that it will sharply raise the price of natural gas for Ukraine, adding further pressure to an already fragile economy.

The US isn't as economically dependent upon Russia, though it has a lot at stake diplomatically. Russian cooperation is key to maintaining sanctions programs against North Korea, and was critical to brokering a chemical weapons disarmament deal with the Syrian regime, a Kremlin ally. Ongoing discord could also complicate matters in Afghanistan. US troops there are preparing to withdraw by the end of this year, but Russia's aggression has already raised tensions in nearby former Soviet states across central Asia, and some fear that it could lead to further regional destabilization. 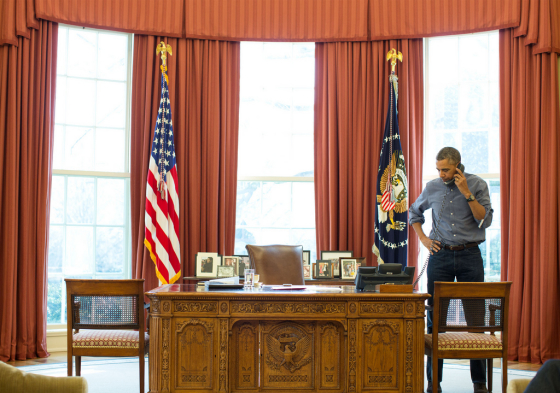 Putin's phone call to Obama last week raised hopes of a diplomatic resolution, but the White House remains deeply suspicious, and there are worries that Russia may look to meddle further in Ukraine or other former Soviet states. Bringing "glory" back to Russia has been a major talking point during Putin's third presidential term, and some suspect that sentiment may be underpinning his expansion into Ukraine — an effort to reclaim territories that he felt belonged to Russia all along. Western leaders have warned that such actions would carry stiff consequences.

"If Russia were to intervene further in Ukraine, I wouldn't hesitate to call it a historic mistake," NATO chief Anders Fogh Rasmussen told reporters this week. "It would have far-reaching consequences for relations between Russia and what we as a whole might call the Western world. It would be a miscalculation with huge strategic implications."

Although recent weeks have seen a return to Cold War rhetoric from leaders on both sides of the divide, specialists say the current standoff is decidedly different. Gone is the overarching threat of nuclear apocalypse, and the crisis is no longer divided along ideological lines of capitalism versus communism.

"the world is going to feel a somewhat different place as a result of all of this."

"There's no real ideological conflict, like there was in the Cold War," says Dmitry Gorenburg, Russia expert at CNA, a US think tank. "That was really two camps trying to get allies for each side... The main ideology these days seems to be Russian nationalism, which doesn't seem to go that far with others."

"Russia, unlike the Soviet Union, is much more integrated into the world economy," he adds, "so it becomes much more difficult to create that kind of division into blocs."

But others say the crisis may have already triggered a seismic shift in global order and alliances, carving out even deeper fault lines between Russia and the West. How these shifts play out, however, is anyone's guess.

"A lot of things are going to be up for reevaluation, and it's going to take some getting used to," Lough says. "But the world is going to feel a somewhat different place as a result of all of this."