Robotic kangaroo borrows its bouncy moves from the real thing

Share All sharing options for: Robotic kangaroo borrows its bouncy moves from the real thing

Sometimes nature is the best inspiration for a robot. And if you're looking to mimic an animal, what better choice than the kangaroo? German company Festo has done just that with its aptly-named BionicKangaroo, which has some impressive robotics behind its adorable looks.

Similar to a kangaroo, the robot has a "tendon" in its leg that propels it forward and recaptures energy on landing. Pneumatics spring-load the tendon in preparation for launch, and when it's released the leg springs backwards. In the air, the leg is moved forward for landing and the tail is adjusted for balance, and when it lands the leg is spring-loaded once again by the impact, preparing it for another hop. 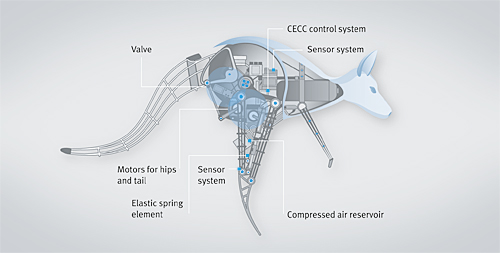 All told, the artificial kangaroo weighs a bit over 15 pounds (roughly 7kg) and it can jump over a foot high (40cm) and cover a distance of roughly two-and-a-half feet (80cm). It stands over three feet tall. As if the BionicKangaroo weren't neat enough, the whole thing is controlled with gestures that are picked up from an armband. The robot is the latest from Festo's Bionic Learning Network, which is a project designed to try to find new improvements in automation by looking at some of the answers offered by evolution. That means that you won't see the BionicKangaroo in stores, but it's still fun to watch it bounce around.