Even though the Obama administration pledged last spring to create tighter accountability guidelines for drone strikes, the US's drone program remains largely shrouded in secrecy. Nevertheless, we know the killing continues; last December, the Council on Foreign Relations estimated that 253 people were killed in targeted strikes in 2013 alone. A collective of artists based in the US, Pakistan, and France have now launched a project, "#NotABugSplat," to put a human face on the casualties. The hope is that seeing victims' faces will push policy makers to reform drone warfare.

People coming together to say, "We exist."

In military parlance, a "bugsplat" is the targeted kill in a drone strike, though that term and the practice have come under fire for dehumanizing the surrounding, often unseen deaths involved. Starting in the Khyber Pukhtoonkhwa province of Pakistan — where drone attacks occur with startling regularity — the artist collective worked with the Foundation for Fundamental Rights to install a massive portrait of a victim that would otherwise be invisible to drone operators and satellites. "The piece was laid out in KPK province about 2 weeks ago and then unrolled into the field by village locals," said an artist and member of the group who chose not to be identified. Depicted there is a child whose identity isn't revealed, but reportedly lost both parents and two siblings in a drone attack. The project draws inspiration from Parisian artist J R's "Inside Out" project, which plastered photographs of people amid Times Square's advertising landscape. Indeed, what J R told The New York Times last year rings true with this effort; that is, it's people coming together to say "We exist." 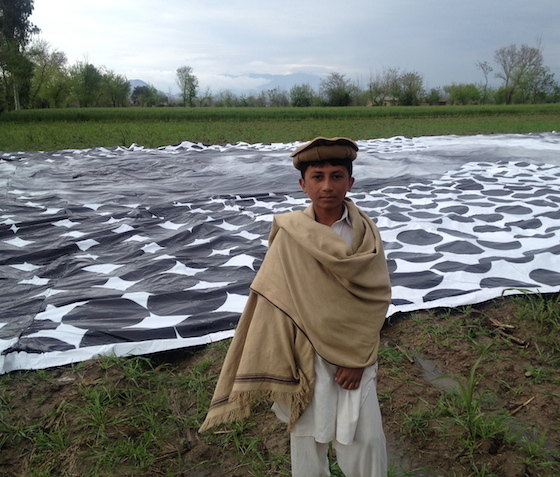 Going forward, the collective plans on doing more installations to raise awareness about the victims, while also providing for the communities affected. "The piece was left there for as long as people decided to use the fabric for roofing and other useful purposes," said the artist. "And of course, we dream of seeing peace in this beautiful region. We hope to do a dozen more of these installations." With lawmakers currently pushing a new bill to reveal the full extent of the drone program, the effort is timely. Whether or not it will bring a swifter change to policy still needs to play out.