Here’s how Apple calculated the extra $2.19 billion it wants from Samsung in court

Share All sharing options for: Here’s how Apple calculated the extra $2.19 billion it wants from Samsung in court

To determine how much individual software features were worth as part of its multi-billion dollar lawsuit, an Apple-paid expert surveyed less than 1,000 consumers about imaginary smartphones and tablets, and included features that weren't even on trial. Another expert then estimated billions in fees for theoretical negotiations that might have occurred between the two companies, as well as how many smartphones and tablets Apple might have sold in their place.

Apple's damages figure, which now stands at $2.191 billion, was estimated by Christopher Vellturo, a Massachusetts Institute of Technology graduate who's spent the past 12 years running consultancy Quantitative Economic Solutions. Vellturo, who testified in a California court today and has been a part of 15 other cases on Apple's behalf, said the figure is based on the sales of more than 37 million Samsung phones and tablets the company sold in the US between August 2011 through December 2013.

"That's a time period where this market is in a profound state of change and growth because so many people are coming in and buying smartphones, so it's a particularly significant period for Samsung to be infringing," Vellturo said.

Not all those phones and tablets were out at the same time though. Some products came after the original lawsuit in February 2012, including the Galaxy S3, which was released a few months later. In testimony, Vellturo also noted that Apple's counting infringement of one of its patents covering "quick links" all the way back to August 2011.

Vellturo said he arrived at the $2.191 billion damages figure after his firm spent 4,000 to 5,000 hours of research, which included industry and market analysis, and going through an "extraordinary amount of documents." Even so, that amount is less than the $2.75 billion Apple sought in a similar trial two years ago, which also involved patents covering the design of Apple's devices.

This time around, only patents covering software features are in play, something that prompted Apple to hire outside help to determine their theoretical worth to consumers. That involved a pair of surveys: one that polled 507 consumers about smartphones, and another 459 customers about tablets. Both were conducted by John Hauser, a witness who spent just minutes on the stand for Apple in a similar case between the two companies in 2012. Today, Apple gave him plenty of time to explain the methodology of the online surveys, which the company is using to help put a value to the five patents it's accused Samsung of copying in its devices.

Hauser, who has been an expert witness in more than 50 trials, said consumers who took the surveys would be willing to spend anywhere between $32 to $102 for certain features like universal search, automatic word correction, and sliding to unlock. Those figures were determined, in part, by a separate element of the survey where consumers said whether their preference to buy a phone or tablet changed based on screen size, price, and the inclusion of various software features. Hauser added that those fees could be viewed as stretched out over the length of a cellular contract term from 12 to 24 months.

"When I buy a cellphone ... I care about these features."

"When I buy a cellphone ... I'm using that phone for 12-24 months," Hauser told Samsung's attorneys, who were critical of the figures, in cross-examination. "I care about these features."

Known as conjoint surveys, the questionnaires are used to determine the demand for specific demands, and have been since the 1970s, Hauser said. Part of that process involves adding a number of "distraction" questions, which are basically padding around the questions the survey has actually been built for. In these surveys, those distractions included 21 other features like special camera modes, alternate screen sizes, and three-way calling. Hauser added that both the conjoint surveys and the distraction questions were frequently used in the automobile industry, something Apple's hoping will undercut Samsung's argument that Apple's wants too much for just a few features of a highly-complex product. 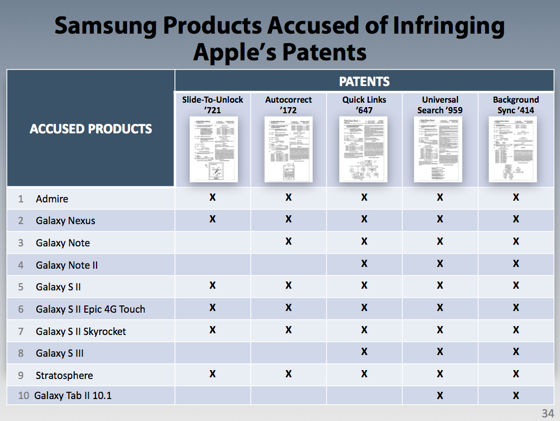 Just how much Apple wants for its patents is what this case is all about. Ahead of the trial, Apple said it's seeking between $33 and $40 a device for the five of its patents for the 37 million allegedly infringing phones and tablets that Samsung sold since 2011. By comparison, Samsung's seeking around $6.9 million as part of its counter-complaint.

The trial is in its second of an estimated four weeks, where both companies get 25 hours each to make their case. In a filing over the weekend, Apple said it expected to rest its case as early as today. After that, it's followed by Samsung, which plans to go after Apple over two patents.

Yesterday's proceedings involved extremely detailed discussions of how three of Apple's five patents in the case work. That included Apple's ‘647 "quick links" patent, which turns information like addresses, phone numbers, and email addresses into contextual actions when you click on them. Apple used the same patent to successfully go after HTC in 2010, a legal spat that was settled in late 2012. The same can't be said for this battle, which has been going since Apple launched the first US lawsuit against Samsung in April 2011.