Different strokes: George W. Bush might have relied on Google for his paintings

Share All sharing options for: Different strokes: George W. Bush might have relied on Google for his paintings

Former president George W. Bush unveiled his personal art collection last week in a special interview on the Today Show, as a means of opening his new exhibit, "The Art of Leadership: A President's Personal Diplomacy," at the Bush Library. As he told his daughter Jenna Bush Hager during the interview, he drew inspiration for his newfound passion for painting from Winston Churchill, who famously took up the hobby in his later years. However, art critic and filmmaker Greg Allen alleges that Bush drew more from simple Google Image searches for sources for his work.

As Allen wrote in a blog post earlier this week,

Bush based his paintings on the literally first-to-surface, easiest-to-find photos of his subjects... He apparently did not tap the enormous archive of photos, taken by the professionals who followed him every day for eight years, which are contained in his giant library. Instead, it seems, he Googled the world leaders he made such impactful relationships with himself, and took the first straight-on headshot he saw.

Indeed, as Animal New York points out, the source photos for several of the portraits — including those for Vladimir Putin, Angela Merkel, and Hamid Karzai — can all be found fairly easily on Google and even Bing, with several popping up on Wikipedia. We've reached out to the Bush Center for comment. 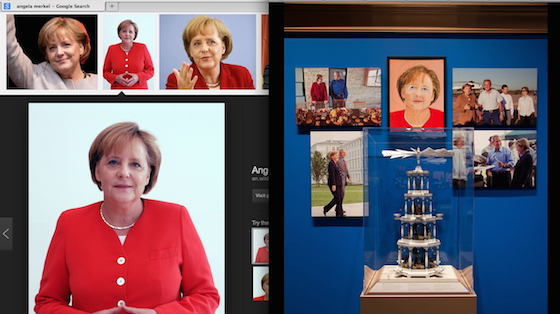 Whatever the provenance of Bush's portraits, it's hard to deny that they are, at the very least, art, and that there is a level of curation happening. It's just a little curious that, much like his governing instincts, Bush's painterly instincts seem to be by-and-large governed by the whims of others, be they policymakers or search engine algorithms.