Comcast wants to own the internet — or, at least, the cables that carry it to most Americans’ homes. Yesterday, the company laid out its arguments for acquiring Time Warner Cable in a filing with the Federal Communications Commission. The merger, announced in February, would let Comcast take over markets that include, among other places, parts of New York, Texas, and Southern California. This would give Comcast a stranglehold on the US broadband market, but it’s not a sure thing yet. The Department of Justice and FCC must decide whether the merger poses a threat to competition for internet and cable services, and the Senate Judiciary Committee is questioning executives in a hearing today. 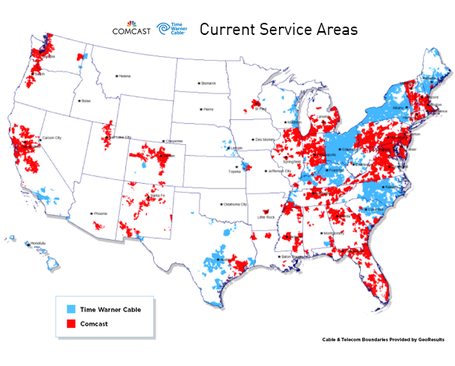 Both companies have been vocal about the supposed benefits of a takeover. Since they operate in different markets, Comcast and TWC argue that they aren’t directly competing for customers, saying that consumers have plenty of other options for internet and video services. We’ve taken a look at the 181 pages of redacted facts, dubious comparisons, and reassuring promises that they’re using to back up their case.

Making up the competition

There is absolutely no way that Comcast can argue it would have meaningful competition in wired broadband or cable after the merger. It’s impossible. Comcast was estimated to have about 20.7 million broadband subscribers and 21.7 million video subscribers at the end of 2013; Time Warner Cable counted about 11 million for both categories. AT&T counted 10.4 million U-Verse internet subscribers and 5.5 million TV subscribers, bringing it close to pre-merger TWC, at least in broadband. Verizon, however, counted only about 6 million FiOS internet and 5 million FiOS video customers in its earnings statement. CenturyLink reported 6 million broadband subscribers, and Charter counted 4.3 million "internet" customers and 4.2 "video" ones. A merger would turn Comcast’s already long lead into overwhelming dominance. And Comcast knows this.

So how can it convince the FCC that this isn’t a problem? By comparing itself to pretty much any company that offers internet or video service in any form. Leaving aside its link to NBCUniversal, Comcast has three major offerings: wired broadband, cable TV, and video on demand. If a company has moved into any of those spaces, Comcast says it’s a competitor.

Taken individually, each of these companies do compete in some sense with parts of Comcast, but the comparison falls apart when you look at how many of these services run on its broadband network. Comcast offers carefully constructed revenue and market cap charts that place it and TWC at the very bottom of the scale — except that it’s comparing itself to the entirety of multinational giants like Apple, AT&T, and Microsoft, as well as bizarre additions like Facebook. There’s even an offhand reference to how Comcast "vigorously competes" with Twitter for engineering talent. 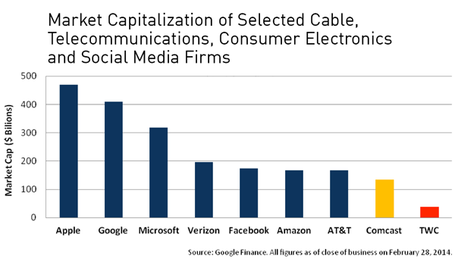 Comcast can only claim new services compete with existing wired broadband if it vastly oversells their potential. Google announced tentative plans to bring Fiber to more cities in February, and Comcast has spun this into a pending flurry of expansions, ignoring the fact that Google has until the end of 2014 to announce its decision and currently operates in only two small markets. There’s no doubt it can spur competition, but certainly not on the scale that Comcast implies.

According to Comcast, you can have choices for broadband as long as you don’t really like using the internet very much

The same goes for wireless broadband from AT&T and Verizon. 4G LTE can certainly provide speeds "comparable to many of the wired broadband services consumers purchase" in the right areas, but it’s far from equivalent. Verizon promises average speeds of 5 to 12Mbps downstream on its LTE broadband router, close to Comcast’s second-slowest tier and a far cry from its "Extreme" 150Mbps plan. And Comcast is counting heavily on the assumption that data caps will lift, citing expert testimony that "while pricing for wireless broadband plans with substantial data usage is higher than for other broadband services today, these prices have and will continue to come down over time as wireless providers achieve more capacity."

Under Verizon’s latest plans, $40 a month can buy you 4GB of LTE for a tablet. For comparison, a Comcast Xfinity plan is capped at no less than 300GB, and Netflix estimates that streaming standard-definition video uses 1GB per hour. That’s a big gap for wireless providers to bridge, given that wired internet is virtually a basic utility at this point. According to Comcast, you can have choices for broadband as long as you don’t really like using the internet very much. 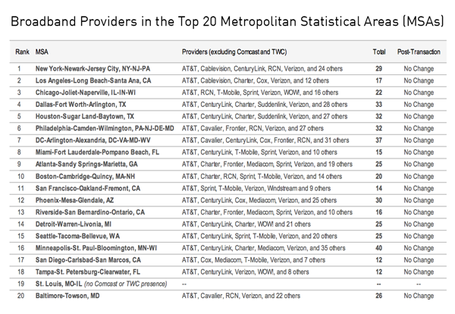 Comcast also points to the existence of other wired internet carriers, which it lays out in a chart of every ISP operating in 20 metropolitan areas. They are all, of course, miniscule compared to Comcast or Time Warner Cable. But this isn’t an unusual tactic: AT&T and T-Mobile offered similar comparisons when proposing their failed 2011 merger, describing tiny companies as fearsome competitors.

Comcast’s coup de grace, though, is the fact that it doesn’t share any current markets with Time Warner Cable. In a purely technical sense, you’ll never have to pick between them for service. Therefore, Comcast says, they aren’t actually competitors at all, absolving them of any antitrust complaints. But the FCC will have to decide whether this lack of direct geographical competition and the potential benefits for consumers outweigh the threat of letting one company own an overwhelming amount of the overall market.

Comcast needs to sell the FCC on the potential improvements a merger would bring, but it thinks that its cable and broadband networks are already pretty great. The solution to this quandary is telling Time Warner Cable customers how much better their service will get. According to the filing, TWC will reap the rewards of Comcast’s hard work and get support to carry out planned upgrades, while both companies benefit from increased efficiency.

The takeaway here is that if you’re in a Time Warner Cable market, there’s a good chance you’ll get more speed for your money: right now, a 25Mbps connection from Comcast costs about $5 less than a 20Mbps one from TWC. But TWC was already planning to speed up its service in at least two markets — its plan would give "Standard" subscribers a full 50Mbps down. The other returns are debatable. Comcast itself points out that cable companies have already pooled resources for a joint Wi-Fi network, and it’s hard to estimate how much Comcast will expedite TWC’s network overhauls. As for its purported customer-service improvements, upgrading to Comcast quality isn’t really much of a step up.

As part of just about any merger, the FCC and Department of Justice will set conditions for companies to follow. Comcast agreed to a number of these when it merged with NBCUniversal in 2011, and it’s offering to carry some of them over to its newest deal. If the TWC takeover is approved, it will almost certainly come with rules — it’s just not clear how meaningful they’ll be.

Comcast’s latest Internet Essentials report said that 300,000 families had signed up since its inception, and this would make it potentially available to millions more, though far fewer would meet the requirements. Though TWC offers a slower $15 internet service tier, its own low-income $9.95 "Starter Internet" pilot program ended in January 2013.

The proposed net neutrality expansion is billed as a major benefit to consumers, and it certainly provides a stopgap while FCC chair Tom Wheeler tries to figure out a way forward for his Open Internet plans. These rules, however, didn’t prevent Comcast from striking a deal with Netflix for better service, or stop it from exempting its Xfinity Xbox app from data caps.

Comcast and TWC are giving the FCC some facts that we’re not privy to in the redacted version, which could give a better picture of their current capabilities. We’re told, for example, that one-third of Comcast customers are on speed tiers that offer 50Mbps downstream or higher, but the companies obscure what percent of customers meet the minimum broadband standard of 3Mbps, and how many occupy the middle tier of around 25Mbps.

By and large, though, these facts are beside the point, as are the promised upgrades. This is an argument based on loosely interpreted ideas about the nature of "competition," and Comcast is stretching these ideas as far as they’ll go. As Comcast executive VP David Cohen writes, it’s pushing for a definition in which "traditional boundaries between media, communications, and technology are obsolete." If you’re not happy with its service, feel free to switch to Facebook’s triple-play broadband bundle.

More from this stream The quest to conquer Time Warner Cable