Chromebooks are the simplest computers you can buy today, but they’ve proven a tricky formula for manufacturers to get right. The perfect Chromebook is cheap, fast enough, well-built, and lasts all day long on a single charge. We’ve seen plenty of Chromebooks try and come up just short, hitting a few of those points while missing on others. The recent models from HP and Acer have offered decent performance and solid battery life, but don’t go far enough to hide the fact that they are cheap laptops at their core. At the other end of the spectrum is the Chromebook Pixel, which offers premium build and fast performance, but costs more than a full-fledged MacBook or Windows Ultrabook.

Almost every Windows laptop maker has a Chromebook or two in its lineup, and now Dell is entering the fray. Its Chromebook 11 (not to be confused with the HP Chromebook of the same name) is being targeted specifically to the education market, where Chromebooks seem like a natural fit. But anyone can order the Chromebook 11 for $299 from Dell’s website today — and get possibly the best Chromebook ever made.

The Chromebook 11 checks off all the specs I look for in a Chromebook: current Intel processor, 4GB of RAM, SD card slot, USB ports, HDMI port, and all-day battery. The 11.6-inch display isn’t as big as Toshiba’s or HP’s Chromebook 14, and its 1366 by 768 pixel resolution doesn’t hold a candle to Samsung’s upcoming 1080p Chromebook 2, but it’s perfectly adequate for the 11.6-inch screen on the 11. Viewing angles and brightness are just okay, and can be improved, and I much prefer the Acer C720’s matte finish to Dell’s highly reflective gloss. My biggest complaint isn’t so much with the screen’s performance — it works fine for browsing the web, watching video, and looking at photos — but with the 0.75-inch thick bezel surrounding the display. It really feels like Dell could have fit a 12-inch screen in this without sacrificing anything in terms of size.

Though Dell has had both winners and losers in its laptop designs over the years, the Chromebook 11 is one of its better works. It’s a handsome notebook, a little hefty but still very portable at 2.9 pounds, that doesn’t try to look like a MacBook and doesn’t scream “I’m cheap!” when you look at it. The dark-gray lid (Dell calls it “Foggy Night” but I’m going to call it “gray”) doesn’t collect fingerprints, and the rubber matte finish on the deck feels great under my palms. Seams are tight and there’s little to no flex to the Dell, unlike the Acer or Toshiba. Many Chromebooks are cheaply constructed in the name of cutting costs, but there are no obvious shortcuts in the Dell’s hardware. The Chromebook 11 is all plastic, but like we’ve seen in smartphones, there’s a right way and a wrong way to do plastic. Fortunately, Dell choose the right way.

For under $300, I don’t usually expect to get a great typing experience, but the Dell’s keyboard surprised me with its well-spaced keys and comfortable travel. It didn’t take me long to get up to speed typing on it, and the keys’ subtle texture felt nice under my fingers. The only thing I really miss from it is any sort of backlighting. Similarly, the textured trackpad punches above its weight class: it’s big, easy to use, and multi-touch scrolling and gestures work without issue. It also doesn’t have the hollow sound of the Acer when you click on it — a further testament to Dell’s build quality.

As with the C720, the Chromebook 11’s combination of an Intel processor and 4GB of RAM is just what Chrome OS needs to shine. The Chromebook 11 handled pretty much anything I threw at it: dozens of open tabs, HD video playback, and lots of writing without breaking a sweat. (Dell offers a version of the Chromebook with 2GB of RAM for $20 less, but I strongly recommend springing for the 4GB model.) It stays cool under pressure, though its fans tend to turn on and off a lot. If you’re listening to music or are in an environment with any sort of noise, you probably won’t notice them, but they did interrupt my quiet writing sessions on more than one occasion.

The platform does have its limitations, but Chrome OS has matured enough to be a suitable computing platform for the vast majority of things people do with their computers. Apart from heavy image and video editing and hardcore gaming, there’s little I can’t do with the Chromebook. (Believe it or not, with an external mouse, keyboard, and monitor, the Chromebook 11 works just as well as a desktop machine as it does as a laptop.)

The Chromebook 11 bests all other Chromebooks in battery life

It’s practically useless without an internet connection and you’ll have to learn to live your digital life in the cloud: the 16GB of storage in the Dell doesn’t offer much room for anything in terms of media. Chrome OS’ multiple-window management has room to improve, and it never really feels like you’re outside of a web browser window, but for those with $300 to spend on a computer, that’s probably all they’re looking for.

All of that great build quality and speedy performance means little if your laptop’s battery dies after only a few hours of use (in that case, you’d have a less-expensive Pixel, not the best Chromebook ever made). But the Dell soldiers on, putting up impressive battery life to go along with its speed and hardware. In our battery rundown test, it lasted a staggering 10 hours and 18 minutes, longer than the C720 and HP’s Chromebook 14 and far longer than most Windows laptops muster. In real-world use, I was able to push the Dell over eight hours without having to plug it in. It’s truly an all-day machine without requiring the bulk of a 14-inch display.

Our review of Dell Chromebook 11 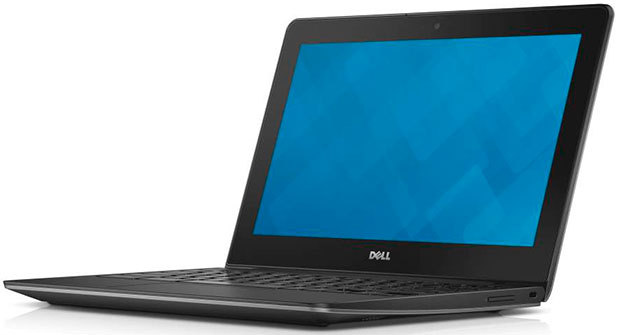 Buy for $299.00 from Dell
The Chromebook 11 is the first model that checks off all of the boxes

Chrome OS has been around for a number of years, but every Chromebook released so far has required that you make some significant compromises when you buy it. That hasn’t stopped me from recommending Chromebooks in the past — I really liked Acer’s C720 last year — but the Dell is on a different level. It offers fast performance, exceptional battery life, a good keyboard and trackpad, and great build quality for a price under $300. The Dell is the first model that checks all the boxes of a great Chromebook — it’s not perfect in all of them, but it’s very good everywhere and that’s really all a Chromebook needs to be. It does cost slightly more than the Acer, but in return you get a better computer. (And you can actually buy the Dell today: since my review of the Acer went up last year, it’s been very difficult to find the C720 with 4GB of RAM in stock anywhere.)

For most people, a Chromebook will be a secondary computer or the first computer they’re given by their parents. (Personally, I like using a Chromebook for focused writing and processing loads of email, but there’s more to Chrome OS than that.) The Dell lends itself well to these use cases: it’s smaller and more portable than the larger HP and Toshiba, and its long battery life means you don’t have to worry about constantly being within reach of an outlet.

Dell’s goal is to sell this to the education market, but a savvy buyer will see it as the best Chromebook you can get right now regardless if they’re still in school or just attended their 20-year high school reunion.

There’s a new king in the Chromebook town, and surprise, it wears a Dell badge.