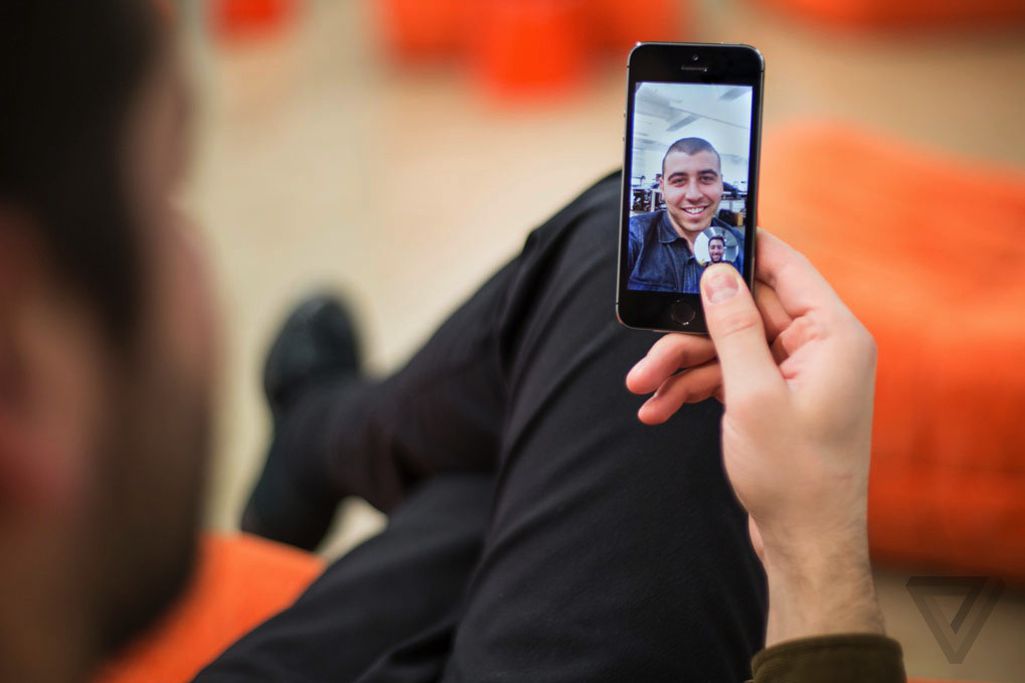 By any measure, Snapchat has had a busy year.

23-year-old CEO Evan Spiegel reportedly rejected a $3 billion offer from Mark Zuckerberg, dealt with a data breach that leaked 4.6 million usernames, and watched as countless “ephemeral” apps launched to compete with his app. Meanwhile, Snapchat, by some metrics, had passed Facebook in its number of daily photo uploads. The night of our interview, Spiegel strapped on a bowtie alongside co-founder Bobby Murphy to be honored by Time as one of the world’s 100 most influential individuals.

But Spiegel isn’t interested in talking about any of that. When I ask to take his photo, he demurs. He might be sitting on top of the world, but he’d prefer for people to focus on the app and not on him. He’d rather talk about conversations — or more specifically, about how we can make our digital conversations better reflect our real ones. That’s the philosophy behind the latest version of Snapchat for iPhone and Android, the two-year-old company’s biggest and most important update yet.

The new app lets you text inside Snapchat for the first time and — you guessed it — once you leave a conversation, the messages disappear. More importantly, the new Snapchat lets you video call a friend at a moment’s notice. But, like most things Snapchat, Spiegel and co.’s implementation is anything but conventional. Their hope is to make video chats feel serendipitous, like a fleeting encounter on a street corner instead of a Skype call planned days in advance.

To Spiegel, the reason none of his friends video call each other on a daily basis is because "calling" was born of an era where software needed to emulate real-world tools. "What does a phone look like without a ringer?" he asks. Skeuomorphic metaphors have always been a part of computing, Spiegel says, because that’s how we all learned to use computers. "But," he says, "the biggest constraint of the next 100 years of computing is the idea of metaphors." Spiegel, who was once described by a colleague as monk-like, recites the line as if he’d memorized it from an ancient philosophy book.

He sums up his idea more neatly. "For Snapchat, the closer we can get to ‘I want to talk to you’ — that emotion of wanting to see you and then seeing you — the better and better our product and our view of the world will be." To Spiegel, the future of communication isn’t about rethinking or upgrading phone calls as Skype, FaceTime, and Hangouts have done. It’s about imagining a future that leaves the phone metaphor behind entirely. 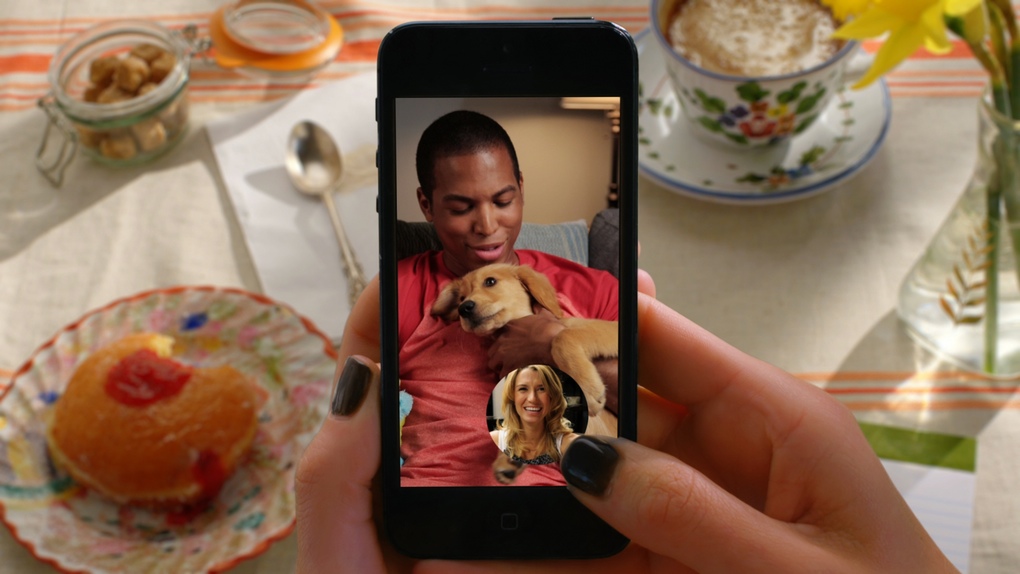 About one year ago, Spiegel and his team started thinking about how to do texting the Snapchat way — in a way that could incorporate the company’s "default delete" philosophy without feeling lame. "What are my favorite texting conversations?" Spiegel remembers thinking. "Well, they’re the ones where we’re going back and forth and we’re both paying attention." A self-professed instant messaging addict in high school, Spiegel wanted texting to feel more conversational and less "transactional." Even with the online indicators of WhatsApp and the lightning-fast nature of iMessage, he still felt like texting didn’t replicate how he talked with friends.

"We're trying to get rid of these weird boxes that we put media into and get to the essence of conversation."

Snapchat started by stripping out traditional texting-app features like read receipts, typing indicators, online statuses, and photo attachments. "Typing and read receipts make a lot of sense for messaging," says Spiegel. "You write a letter, you put it in an envelope, you send it to a friend, and you want to know when they get it. It’s like FedEx — they let you know when the package gets dropped off." But a modern chat app, he says, should feel like you’re actually in the same room as the person you’re talking to.

"We’re trying to get rid of these weird boxes that we put media into and get to the essence of conversation — that we’re both here," says Spiegel. "The essence of conversation is not which media format we choose to talk to each other with, so we don’t differentiate between snaps and chats. It’s just someone wanting to talk to you." The new app’s push notifications, accordingly, don’t tell you whether you’ve received a snap or a chat, they just show the name of the friend who wants your attention. Snapchat has come up with unique solutions for the other usual trappings of a messaging app, but they work differently than you might think. Instead of read receipts, for example, you’ll know a message was read because it disappears from your conversation (but you can tap on individual texts to save them). 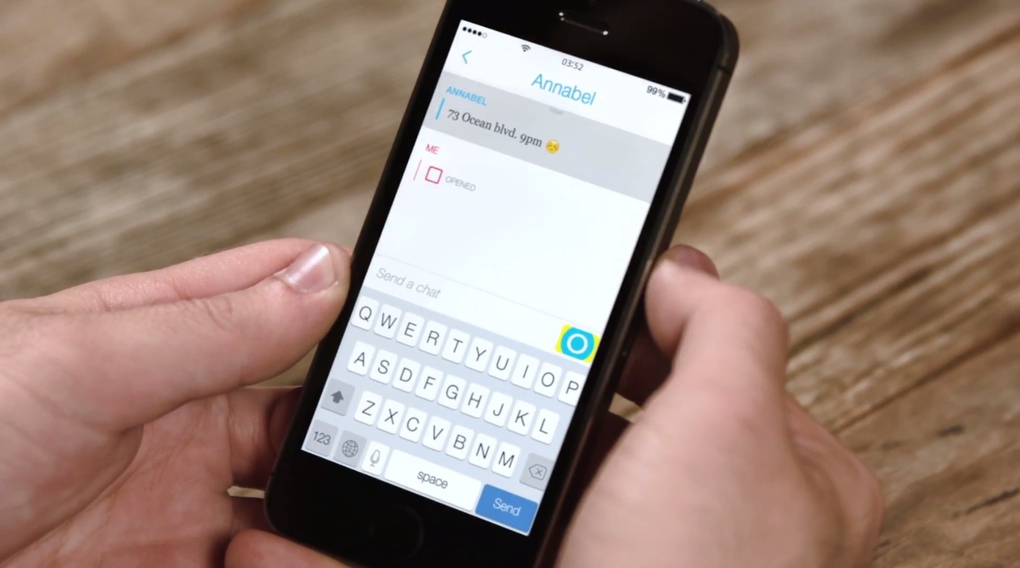 Online status is handled by something Spiegel calls "Here" — an idea at the crux of the new Snapchat. At any moment, a blue bubble might subtly appear in your chat window and pulsate softly to let you know that your friend is also in the chat. "The accepted notion of an online indicator that every chat service has is really a negative indicator," says Spiegel. "It means ‘my friend is available and doesn’t want to talk to you,’ versus this idea in Snapchat where ‘my friend is here and is giving you their full attention.’" Only when both people are inside a chat can they initiate a video call by pressing and holding on the blue button. 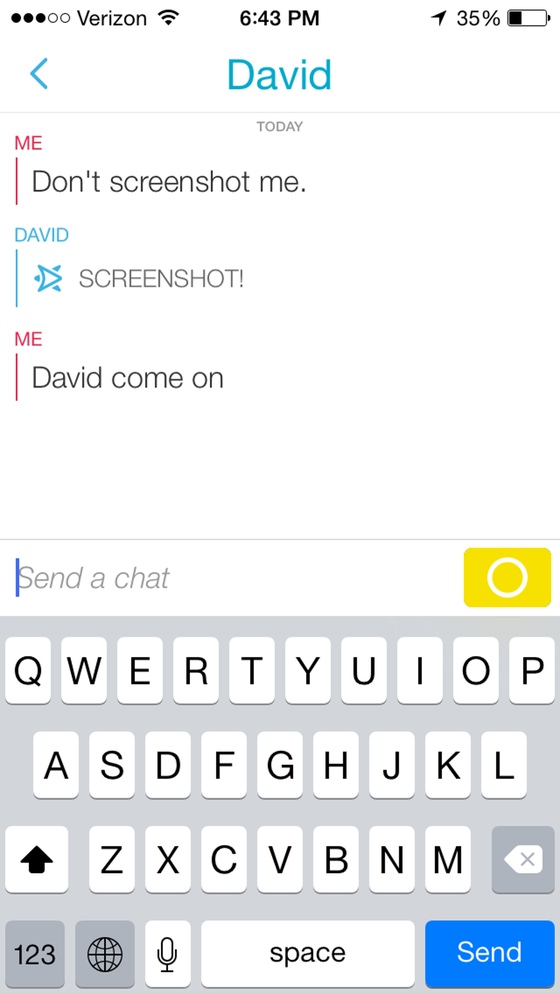 But video chats don’t have to go both ways. When you tap and hold on the blue button, within a couple seconds your face lights up on your friend’s screen. There’s no ringing, and there’s no "answer call" button to press. You can talk as much as you want while your friend listens, and if you want to show them something you can drag your finger upwards to activate your rear-facing camera. If your friend wants to join in, they can tap and hold on their screen to start sending video your way. There’s no "end call" button either, naturally. You just lift up your finger.

"Ideally you have these serendipitous moments where you and I are both available at the same time," says Spiegel, but how often will you and a friend be staring at the same chat window? Perhaps more often than you’d think, thanks to one of Snapchat’s most interesting new innovations — its typing indicator, or lack thereof. Spiegel describes a scenario where you start typing an iMessage, then see that your friend is also typing, so you stop, and then they stop. It’s like bumping into somebody in the hallway and juking back and forth, unable to pass. The "Here" indicator solves this problem, Spiegel says, but what if you still want to know when a friend’s ready to chat? Instead of using in-app typing indicators, Snapchat sends a push notification to your lock screen to say that a friend has begun typing a message to you. The hope is that by the time they hit send, you’re already in the chat, ready to respond or video chat with them.

Spiegel and co. also took the opportunity to cut down on the incessant text notifications many of us experience. The new Snapchat only buzzes your phone once, no matter how many times a friend texts you in a row. Also, while you’re video-chatting with a friend, your own portrait eventually fades into the background to avoid distracting you. These choices are some of the most deliberate inside Snapchat, but are broad enough in principle that you could imagine other apps picking up on them, much as they cloned Snapchat’s disappearing messages.

Spiegel’s refusal to abide by conventional notions of calling, texting, or sending a photo would seem naive if Snapchat weren’t such a runaway success. The app convinced tens of millions of people to share more photos than they ever had by stripping down conventions about how sending an MMS should work. Today, with just a fraction of Facebook’s user base, Snapchat users share more photos per day than Facebook users. Snapchat claims that over 700 million snaps are shared per day on the service, which could make it the most-used photo-sharing app in the world — ahead of Facebook, WhatsApp, and others. Even Snapchat’s Stories feature seems to be doing well, amassing 500 million views per day.

However, upending the mobile photo-sharing space seems simple in comparison to changing a person’s texting habits. Services like WhatsApp, Skype, and iMessage have hundreds of millions of active, loyal users who text and video call each other every day. Does the new Snapchat offer enough of an incentive to switch? When people want to have a conversation with a friend, will they tap on Snapchat, or on their messaging app? "If we can always try and emphasize how important it is for both people to be [in a conversation] at the same time, that would be a win for us — that would be the holy grail," says Spiegel. "This captures the best parts of a conversation, that you and I are here, we’re both paying attention to each other, and that feels good."

Spiegel speaks exuberantly about the "zillion" iterations his team went through to design one icon in the new Snapchat, but he quiets down when I ask about competitors, or about money, or ads. "I don’t want to disrupt anything," he says. "We never conceive of our products as disruptive — we don’t look at something and say ‘let’s disrupt that.’ It’s always about how we can evolve this and make this better."

"You and I are here, we're both paying attention to each other, and that feels good."

He describes a 25-year plan for the company where Snapchat might facilitate all the ways you talk to friends and family, but without feeling overbearing. "Our whole goal is trying to get out of the way so you can have your relationship, because we don’t want the power that comes with being a space," says Spiegel. "I don’t need to broker your relationship with someone, and you don’t need to feel like I’m there. Snapchat isn’t a separate space — it’s just a way to have a conversation, and a way to share what you’re experiencing."

Whatever you want to call it — social network, utility, future-phone — Snapchat seems to be sticking around, and its addictive nature is still not so easy to define. It’s a combination of small, surprisingly good ideas that make Snapchat work. These ideas might feel arbitrary, especially in comparison to the metaphors we’ve come so accustomed to using (like a ringing phone), but Snapchat’s solutions seem to feel more natural to its many users. These solutions attempt to solve for some of the more cumbersome aspects of digital communication, but they might also introduce whole new kinds of awkwardness of their own, perhaps where both friends are "here" but nobody’s saying anything.

Snapchat began with disappearing photos, but Spiegel’s vision is broader than just photos. He’s trying to create digital spaces with the same immediacy and ephemerality we get in real world conversations. Smartphones have changed the way we all communicate with each other. But if Spiegel can achieve his vision, Snapchat could be the app that changes it back.