An affordable device made with developing markets in mind

It looks like Motorola's next smartphone won't stray far from the design language of the Moto X and the Moto G before it, if images leaked on Friday are legitimate. We're getting an early look at what's said to be the Moto E courtesy of Brazilian retailer Fast Shop. The retailer jumped the gun on Friday and posted its listing for the Moto E, which is expected to be announced on Tuesday in London.

The phone marks Motorola's first new device since Google announced in January that it was selling the smartphone unit to Lenovo, but it shouldn't come as a surprise that it looks so similar to the Moto X and Moto G. Considering just how long it takes to develop a smartphone, this device was created under Google's watch. And as Motorola made clear in its invite for the Tuesday event in London, this is definitely an affordable phone that's "priced for all." 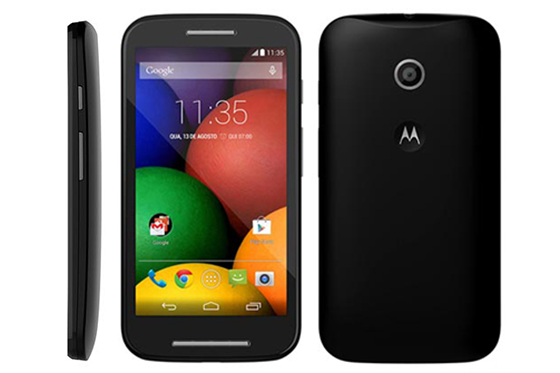 According to the specifications revealed by Fast Shop, the phone will have a 4.3-inch screen, 1.2GHz dual-core Snapdragon processor, 1GB of RAM, and 4GB of storage (expandable). It's also said to have a 5-megapixel camera, dual SIM slots, a 1,980mAh battery, and removable back plates for customization. The GSM device doesn't have LTE. Those specs are all either a step down from or on par with the $179 Moto G, so we'd certainly expect a very low price on the Moto E. Something around the $100 mark would put it up against phones running Firefox OS and Nokia's affordable Asha line around the world. The dual SIM slots also suggest that Motorola's focusing on developing markets with this device — considering the launch event is in London, it's possible it may never come to the US. Either way, we'll find out for sure come Tuesday, when Motorola officially reveals the phone.