Gmail may soon look nothing like the Gmail we all know so well. Google has invited a select group of users to test a completely new interface for the webmail client, according to Geek.com, which appears to be part of the trial. The test version of Gmail — which may never see an official release — dispenses with design elements that have been present from the very early days of the email service. Most notably, the unwieldily sidebar has been replaced with a slide-in pane. Buttons like "compose" have been moved to the bottom right corner, and it looks like there's another new feature down there: reminders. Just like on Android, you should be able to tell Google to let you know about a date in the future or to respond to a certain email. Hangouts, of course, are also integrated into the design. And cosmetically, there are major changes afoot that make the interface look right at home next to Google Now. 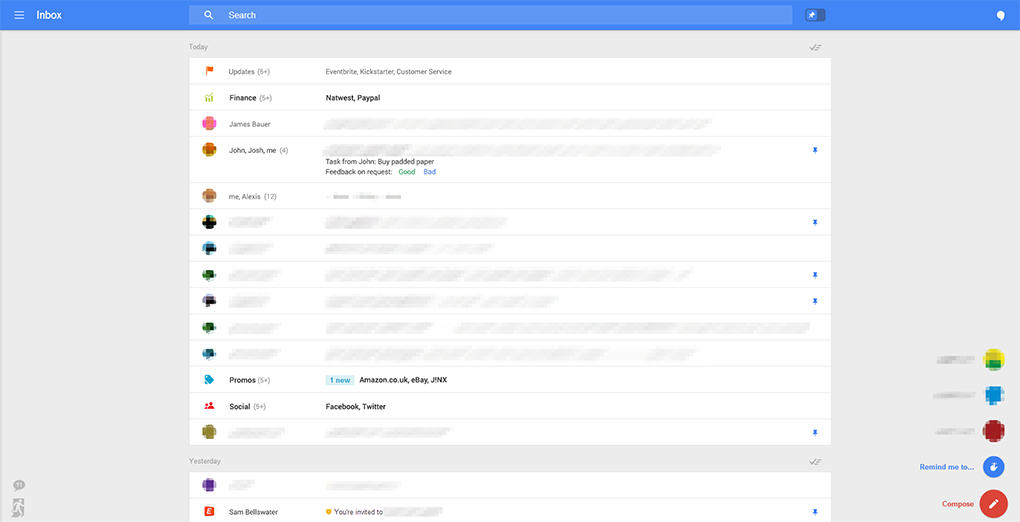 The redesign matches a test layout revealed last month by Geek.com for mobile web access. Like that leaked interface, this test version of Gmail includes some major new features, like snoozing an email and setting it to return to the top of your inbox at a later date in time. Stars have also been replaced with pins, and you can set it so that pinned emails always stay at the top of your inbox. In addition, Travel, Purchases, and Finance tabs now join the current Social, Promotional, Updates, and Forums tabs that are currently offered in Gmail to keep your inbox manageable and organized.

However, it's important to note that companies often test new interfaces, and many redesigns never see wide release. Google, in particular, is well known for trying new layouts but never releasing them to the public. Nevertheless, if Google is working on redesigning Gmail, we just hope Google's paid some attention to its woefully inadequate contact manager.