Spurious Correlations finds the hidden, totally pointless connections between everything

Spurious Correlations finds the hidden, totally pointless connections between everything

Spurious Correlations is the virtual embodiment of a useful rhetorical cudgel: correlation does not equal causation. Sift through its data sets, and you'll find all sorts of statistics that can be mapped onto each other — margarine consumption and the divorce rate, crude oil imports and number of train collision deaths, bee colony growth and the marriage rate. If you ever need to demonstrate that two things can appear connected purely by chance or some entirely separate factor, this is your site. If you need "news of the weird" fodder and are willing to play fast and loose with the facts, the charts are still technically accurate.

The clever thing about Spurious Correlations is that it's fairly transparent about how it generates relationships. When you "discover a new correlation," you select a variable from a list of categories ("interesting causes of death," "sunlight by state," and so on), then let the site show you a long list of other data sets that follow roughly the same curve. The resulting charts can be marked as "interesting" or "not interesting," the surefire recipe for success being an obscure and mildly interesting social factoid combined with a grisly death statistic. 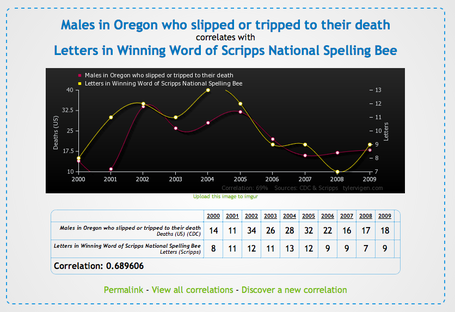 The most satisfying charts, though, are the ones that play into the basic human desire for pattern recognition. Even if you know a correlation was semi-randomly generated by a fellow internet user browsing a drop-down menu, you find yourself trying to justify it in your head, or at the very least filing it away to write into a short story. After all, eventually one of those connections has to accidentally end up meaning something. 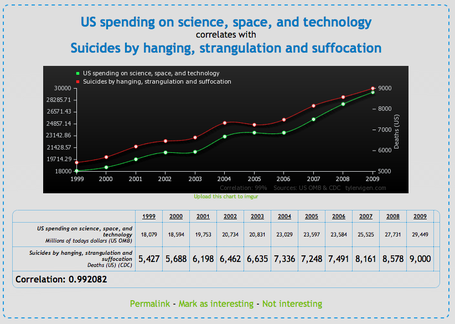 Is the bitterness of knowledge driving us into the arms of death? Are scientists working around the clock to solve the problem of throat-oriented suicides? It's like looking for shapes in the clouds.