The Parrot AR.Drone was a remarkable toy when it was introduced in 2010, offering consumers a ready-to-fly quadcopter they could control with an iPhone. In 2012, the company made that toy friendlier and more durable. But for 2014, the company is done just playing around. The new Parrot Bebop Drone — aka AR.Drone 3.0 — is also designed to be a tool for aerial photos and videos. Like its increasingly popular competitor, the DJI Phantom 2 Vision, the new Parrot flyer hopes to attract filmmakers and photographers with an increasingly high-quality flying camera, built-in GPS to fly programmed waypoints, and the ability to hover and pan the camera.

But Parrot may also wind up leapfrogging DJI with unheard-of image stabilization and range — plus the officially-supported ability to use a VR headset while flying around.

Instead of using a motorized gimbal to move the camera — which would add additional weight — the Bebop Drone uses an ingenius combination of software and hardware to let a 180-degree fisheye lens do the trick. Using a dedicated image processor and loads of sensors, the drone simply carves out a nice small rectangular section of the huge curved fisheye image while simultaneously stabilizing the image digitally. That means you wind up throwing away a lot of the data, but it's hard to argue with the results: a clear, stabilized video feed from a tiny drone that weighs less than a pound.

Besides, the ability to rapidly chop up pieces of a huge fisheye image allows the Parrot to perform another neat trick. If you buy the optional Skycontroller — a giant R/C flight controller with huge antennas that can communicate with the drone from a full two kilometers away — you can also plug in an Oculus Rift virtual reality headset and freely look around while piloting the drone from a first-person perspective. There was quite a bit of lag in a prototype we tried, which resulted in a painful-sounding crash into a wall, but it makes for an incredible out-of-body sensation and the featherweight drone emerged unharmed. 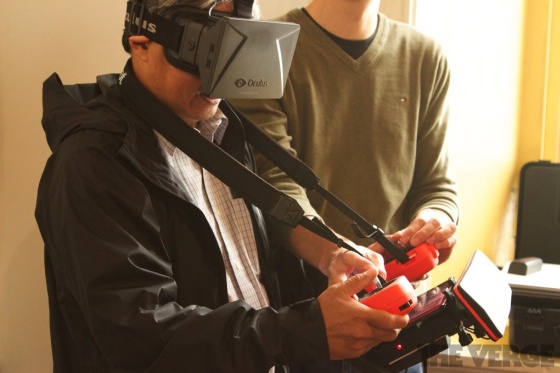 The elephant in the room is battery life, as the Bebop Drone is limited to 12-minute flights with its included 1200mAh battery pack. That's not a lot of time to get the perfect shot for a film, nor nearly enough to make a two-kilometer trip. It's also not clear what the drone might cost, but Parrot CEO Henri Seydoux said it will ring up somewhere between the original $300 Parrot AR.Drone and the $1,000 you might spend for one of DJI's camera-equipped Phantoms.

The Bebop Drone should ship in the fourth quarter of the year.