Editor's Note: This article was updated on September 6th, 2014, with the latest details on the iPhone 6 ahead of Apple's announcement on the 9th.

For a company famed for its tight-lipped secrecy, Apple’s flagship products have a surprisingly strong track record for leaking essentially in their entirety. The Wall Street Journal has a long-standing history of pre-event leaks, 9to5Mac is remarkably well-sourced, and everyone from suppliers to Best Buy employees provide a steady stream of just-plausible-enough rumors leaking out over the months running up to the launch of a new device. From the iPhone 5S to the iPad Air, few Apple devices have been a true surprise in the last few years.

It all means that, even weeks or months before Tim Cook takes it out of his pocket or an envelope or makes it appear out of thin air, we might already have a pretty good idea of what the next iPhone is going to look like. Rumors are flying fast and furious, but there are some that are both so substantiated and so consistent that they’re harder than ever to discredit. Where there’s smoke, there’s fire.

Of course, nothing is certain until it’s certain, and Apple does tend to keep at least a few things hidden. But here’s the most likely and interesting of what the rumor mill is telling us about the next iPhone.

There is probably more than one "next iPhone." Rumors have it that there will be two new models as Apple responds to the massive demand for bigger phones. The exact size has been heavily debated, but most sources have come to believe that one upcoming iPhone will have a 4.7-inch screen, the other a 5.5. Supposed leaks of both models show a device that looks a lot like the latest iPod touch, with a thin profile, curved edges, and a protruding camera bulge.

The handsets depicted looks to be thinner than ever (as little as 6 millimeters thick), with a rounded look rather than the squared sides on the 5S. One particularly popular photo shows gold, silver, and space gray models, each with an aluminum back broken up only by two horizontal stripes for the antennas instead of glass on the top and bottom.

Apple’s new sapphire production processes could mean the new iPhones could have new types of displays in addition to new lenses and buttons. At least one reputable source says they’ll have curved displays, too, but that’s debated all over. Leaked photos of what's said to be the next iPhone do show that the face of the device has tapered edges, which may be designed to make the phone feel smaller than it truly is.

Apple’s history says the 5S will remain on sale, and there’s no indication so far that Apple’s even replacing it with an updated, device of the same size. It’s possible both new models will be larger, and anyone looking for a 4-inch iPhone will still be buying the 5S. No word yet on what will happen to the colorful 5C, though it seems the likeliest candidate for Apple’s free option. 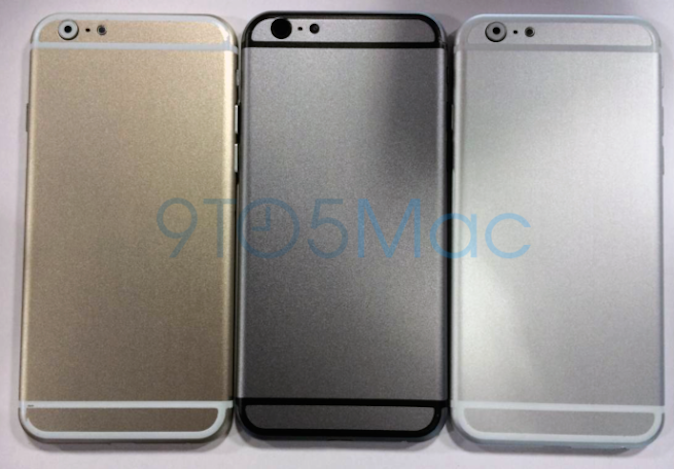 The possible three colors of iPhone 6, in dummy form, first reported by 9to5Mac.

It might be more expensive. At least one analyst says that Apple is currently negotiating to raise the base price of the iPhone to $299 with a two-year contract. Apparently carriers have thus far said no, but in a market where many people feel like innovation has slowed down, Apple could have the hit of the year in store — and that may give it the leverage it needs to charge whatever it wants. Presumably the 4.7-inch version will cost no less than $199 on contract, while the larger, 5.5-inch model would carry something around a $100 price premium.

The 4.7-inch model will probably go on sale first. Several reports suggest Apple is dealing with production issues on the larger model, which could push its release back as far as early 2015. But the consensus is that both models will be announced at Apple's event on September 9th, with the 4.7-inch model shipping first.

It’s probably called the iPhone 6. That’s not exactly a controversial guess, and Apple does have some history in naming differently sized products the same thing, as with the MacBook Air. But it’s not impossible that Apple will repeat what it did with the iPad or MacBook, eschewing the number scheme for names like Air, Mini, or Pro. It’s hardly going to call either of the largest iPhones ever "the iPhone Mini," but some reports suggest that the 5.5-inch model may be called the "iPhone Air" because of its super-thin profile. Other observers have suggested a possible "iPhone 6" and "iPhone 6L" naming scheme (with L denoting "large"). 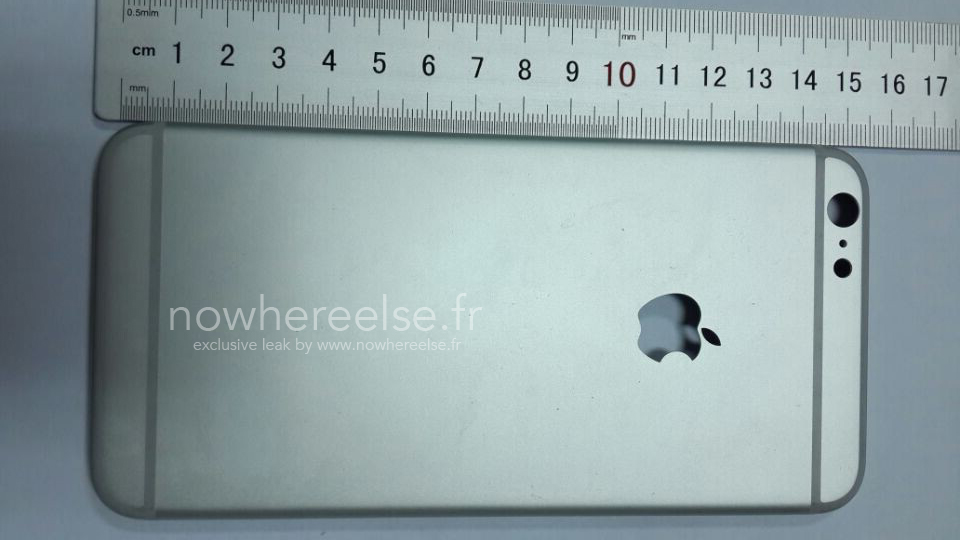 This picture from nowhereelse.fr of what's supposedly a leaked rear case is one of a scarce few images said to depict the larger, 5.5-inch iPhone 6.

It might have an amazing new camera. It’s the feature everyone talks most about, and Apple’s always put huge resources behind improving its cameras. Its latest move was to hire Ari Partinen, the Nokia engineer behind the Lumia cameras — though he’s too new to the company to make huge changes just yet.

More pressingly, Apple’s filed a patent for a particular kind of image stabilization in a smartphone; it will reportedly increase the size of the pixels in its 8-megapixel sensor; and apparently there’s a "Super Resolution Mode" in the next version of the camera app. Of course, cameras are where virtually every manufacturer over-brands and under-delivers, so this could be an aggressive name for a simple new feature, but the prevailing wisdom seems to be that Apple is working on something remarkable for the next iPhone.

It will be your wallet. Apple has almost 800 million iTunes accounts and hundreds of millions of credit cards on file, and numerous trustworthy reports say that Apple is taking on Google Wallet, PayPal, and others with its own mobile payment system built into Passbook. The company's already said to have secured deals with MasterCard, Visa, and American Express, and it's working on bringing retailers on board with the new system. It's suggested that the system will use NFC — supposed part leaks have even pictured such a chip — meaning it would work with many current contactless-payment terminals. TouchID would, of course, be integral in keeping the system secure, and it might also be part of a system that confirms online charges with your fingerprint. It would be both secure and simple, and a "Pay with iTunes" of sorts could be a huge revenue driver for Apple. 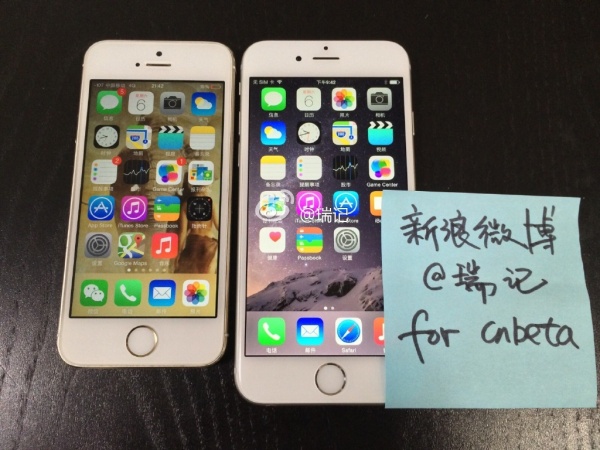 Of dubious Weibo origins, a picture of a functional 4.7-inch iPhone 6 running a version of iOS designed for a larger phone.

It will come with a new version of iOS. Apple announced iOS 8 back at WWDC this past June, and history suggests the new iPhone will launch alongside the new OS. HealthKit is the flagship new feature, using the many sensors purported to be in the new device — which could measure everything from pressure to humidity — to tell you how many steps you took or even (apparently) your blood-oxygen levels. Siri stands to gain some new tricks, including the Shazam-aided ability to tell you what song is playing.

HealthKit for iOS 8, as announced at WWDC this year.

It might work with the long-rumored "iWatch." HealthKit is a natural way for iOS to collect data from a so-called iWatch, which many have speculated is going to be a primarily health-focused device anyway. And some leaked screenshots have shown a "Watch Utility" app, though there’s almost no chance that the leaked name or app icon are final. Reports do suggest that the iWatch could sync with the new iPhone using NFC.

The iWatch has become thought of more and more as a companion to the iPhone, rather than a single standalone device. All signs suggest that Apple will announce the two at the same time.

Rumors about larger iPhones have been flowing for months, speculation about an Apple smartwatch for even longer. But they’ve recently hit a fever pitch that tends to only occur right before rumors become reality. All signs point to big new things from Apple in the next few weeks. Tim Cook promised Apple is "closer than ever" to a new product category, and if he’s ready to launch both two new iPhones and a new smartwatch, Apple’s product lineup might soon look very different than it does today.

Of course, nothing is yet certain. Apple tests many products it never releases, and there’s often a very fine line between a leak and a guess. But for years, all the information you needed to find out what Apple has been up to has been available, as long as you knew where to look. This year, as ever, there are plenty of question marks left, but Apple’s next big moves are coming rapidly into focus. We'll know for sure on September 9th, when Apple holds its event in Cupertino, California.

Dante D'Orazio and Jake Kastrenakes contributed to this report.