Dana Timmer believes the famous wreck is 18,000 feet below the Pacific

Share All sharing options for: This man is asking for $2 million on Kickstarter to find Amelia Earhart’s plane

Seventy-six years ago, Amelia Earhart and her navigator Fred Noonan set off on the most dangerous leg of a flight around the world, the 2,556-mile journey from New Guinea to Howland Island in the Pacific. They were never seen again. The rescue team gave up after a 17-day search and the incident was "officially set down... as one of aviation's mysteries."

Dana Timmer, a pilot and four-time America’s Cup sailor, is one of many people still fascinated by Earhart’s disappearance. Timmer, who led a $1 million deep-sea search for the plane in 1999, believes Earhart’s twin-engined Lockheed Electra has already been found — researchers just didn’t realize it. He’s asking for nearly $2 million on Kickstarter to prove his theory right.

Amelia Earhart theories fall into three camps: the Howland Island theory, the Gardner Island theory, and the conspiracy theories, which range from Earhart being captured by the Japanese to living the rest of her life out secretly in New Jersey. Timmer is in the Howland Island camp, which holds that Earhart and Noonan crashed very close to their destination. After cross-referencing data from different groups that attempted searches in that area, his team has identified four targets — anomalies on the ocean floor that look like blobs of pixels on the sonar scan. Now he wants to go back with high-resolution sonar and photographic equipment to prove that one of these masses is the Electra. 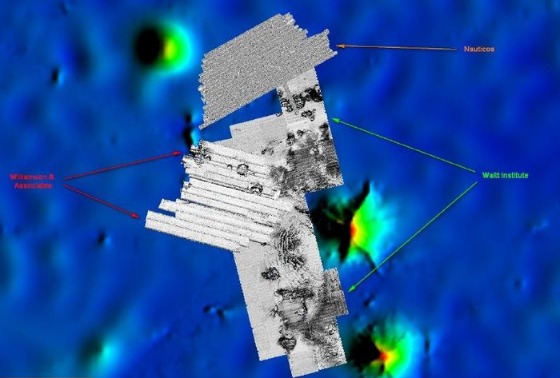 The sonar scans that Timmer says show four anomalies that could be the plane.

The expedition will be managed by Williamson and Associates, a company that conducts deep-sea surveys and has discovered a number of historic shipwrecks for clients ranging from the Discovery Channel to the US Navy. The plan is to depart from Samoa on the Sarsen, a survey vessel capable of being deployed for 40 days without refueling, and sail for five days to Howland Island with a team of documentarians and researchers. They’ll investigate the targets up close; if they don’t find the plane, they’ll scan as much of the area as they can.

They’re promising to update Kickstarter backers with daily progress reports and a live video feed, culminating in a documentary film about the expedition. "You'll get a rare and inside close-up look at what it takes to search for objects below in up to 18,000 feet of water; with interviews of the project team and crew members, as well as opportunities to have your questions answered," Timmer says in his Kickstarter pitch.

If he finds the Electra, Timmer plans to only take photo and video. Then, he’ll raise more money to retrieve, conserve, and display it. Earhart and Noonan’s remains have likely disintegrated, but the plane may be fairly well-preserved. Extracting the wreckage will be a challenge, however; aluminum corrodes immediately when hit by oxygen, and the researchers have no idea how many pieces the plane will be in. (Timmer claims Earhart’s niece Amy Kleppner has given him the rights to the Electra; this claim could not be verified by press time, but managers of the estate said there are communications going back 12 years.) Eventually, Timmer hopes to donate whatever he finds to the Smithsonian Institution.

There is no guarantee that Timmer is right, but there is good reason to think the plane went down near Howland Island. In her last transmissions, Earhart said they were close but running out of fuel. Her radio signal was strong enough that one of the radio operators on the US Coast Guard ship Itasca, which was waiting for them to refuel, walked out on deck to see if he could spot them.

There is disagreement even within the Howland Island camp, however. Researchers Elgen Long and Gary LaPook each have their own theories of Earhart’s trajectory that conflict with Timmer’s.

"We all have her near the island, we just have her coming into the island in a different way," Timmer says. He’d like to have Long and LaPook along if he gets funded, however. "I would invite them to join the expedition," he says. "Then just go out and finally do this thing and find that plane and solve that mystery."

The competing Gardner Island theory, held by Ric Gillepsie of The International Group for Historic Aircraft Recovery (TIGHAR), says that Earhart and Noonan ended up about 400 miles south of Howland island on Gardner Island, now part of the nation of Kiribati. TIGHAR has made repeated expeditions to the island, retrieving artifacts it claims are from Earhart’s plane. The group is planning a $3 million expedition in September for which it is also fundraising.

Brian Dunning, a science writer who runs Skeptoid.com and is a fierce critic of TIGHAR, believes Timmer has the right strategy. "The Electra is a very small target in a very large expanse of very deep water," he says in an email. "If Earhart's plane is ever going to be found, it's going to be found by a science-based group like Expedition Amelia, and not by a group like TIGHAR interested only in selling a sensational story to TV networks without regard to facts."

Tom Crouch, a senior curator at the Smithsonian’s National Air and Space Museum, says he wouldn’t want to place a bet one way or the other. Earhart’s maps turned out to be inaccurate, the weather was foggier than expected, and no one knows what kind of winds she was dealing with. But "if somebody holds a gun to my head and says, ‘Where do you think they are, Amelia and Fred,’" he tells The Verge, "I would say I think they’re 18,000 feet down in the bottom of the Pacific, not all that far from Howland Island."

Earhart was the first woman to fly solo across the Atlantic Ocean, after which she became a celebrity and role model for women. She was a co-founder of The Ninety-Nines, a female pilot group, and promoted women’s causes and the development of commercial air travel as an editor for Cosmopolitan, a vice president at National Airways, and various other venues.

"After all these years, Amelia Earhart is still our favorite missing person," Crouch says. "She was one of the best-known women in the nation, in the world. Personally, I kind of like the fact that Amelia disappeared, because it’s kept the memory of this really wonderful human being alive, generation after generation."