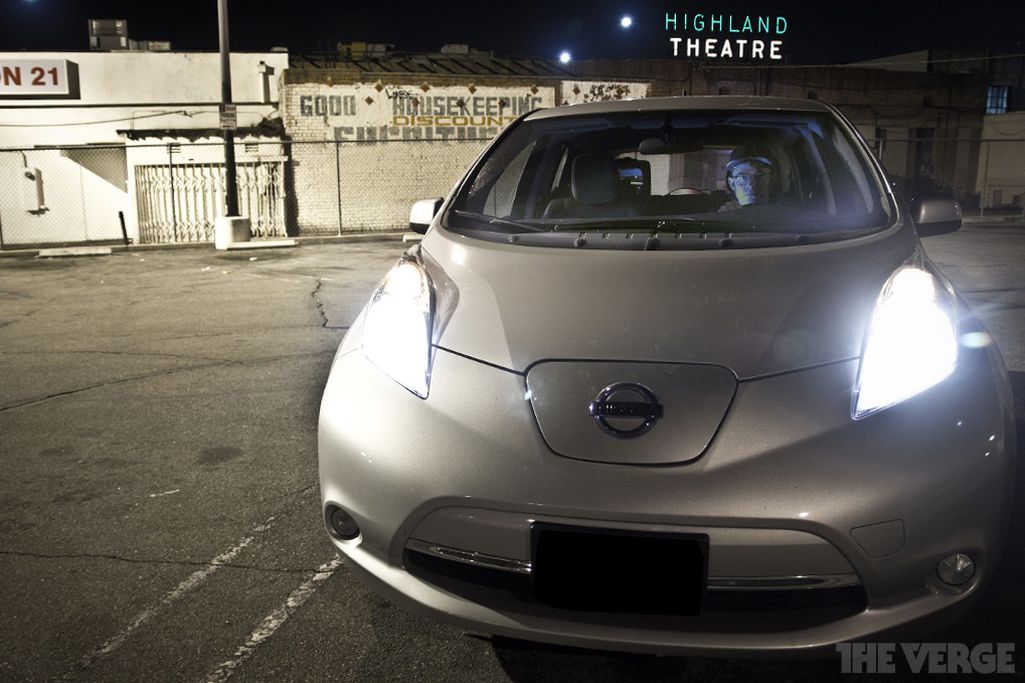 A wise man once said the future has already arrived, it’s just not yet widely distributed. Usually, that future-present is the most fun sometime between the “early adopter” and “mass consumption” phases. That’s where we’re at with the electric car. It’s like Facebook in 2007. All your internet friends were poking each other, but your grandma hadn’t joined yet so you could still post raunchy vids without worrying too much about her de-friending you IRL. The Nissan Leaf may not be too crass, but there’s something still risqué about it.

Pretty cheap for an electric vehicle, with an effective price of $18,000, the 2013 Leaf brought that future-present-perfect to car ownership. In 2012, the EV world was still an early-adopter exclusive, with Chevy’s $35,000 Volt leading sales in the USA. There are a lot of things that make driving electric in May 2014 feel unmistakably utopian, but it’s a utopia that has not yet arrived for all. 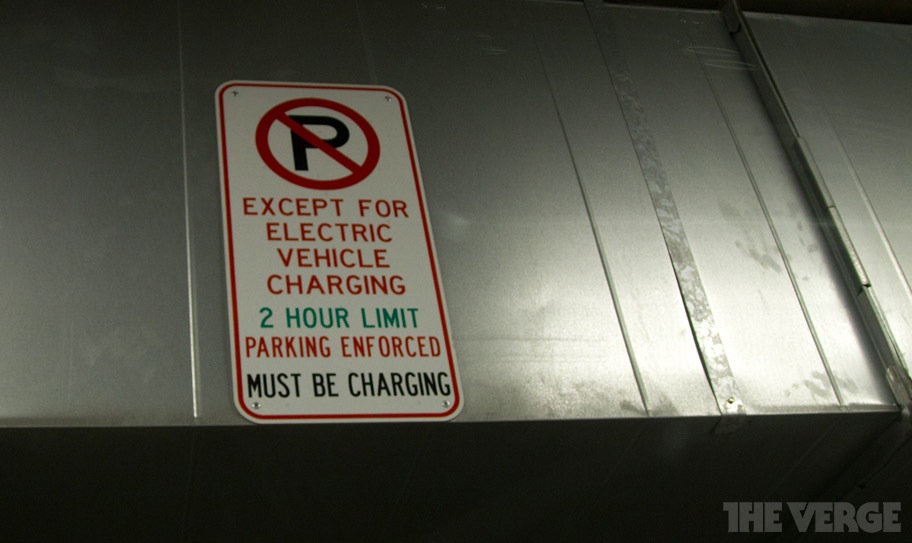 With a range of about 90 miles and an average charge time of 21 hours, the Leaf’s limitations mean most Americans will need to fundamentally change how they think about driving before they bite the electric bullet. But Los Angeles isn’t most of America, and for my LA-based family of three, the transition has been a challenge — but a challenge that feels more like playing Tetris than being on Survivor. Sometimes it feels like the Leaf has more in common with a cellphone than it does with a Camry. The "key" is actually a proximity fob — I almost never take it out of my pocket. You push a button to start the car, and instead of the clunky turning over of a gas engine, you hear one of three user-selected startup sounds — sort of like the soft Apple "dong," though Nissan’s sound design feels more Pokémon than Brian Eno. Here’s the one I chose:

And then: nothing. The first thing you’ll notice about driving a Leaf is how silently it runs. The dash displays the charge level and computes the number of miles remaining on the charge, which can change depending on how aggressively you drive and how much you use the A / C. Shifting into reverse on the Prius-style knob triggers a friendly warning tone, a sort of consumer version of the annoying beeping you hear when a big commercial vehicle is backing up. Without the purr of a gas engine, it’s often difficult for passersby to hear that an electric vehicle is even on.

The second thing you’ll notice about driving a Leaf is how normal it feels. You turn the steering wheel, you hit the "gas," you use your turn signals, you hit the brakes. It’s a car. The biggest difference in acceleration: EVs only have one gear, and when you floor it you can hear an electric hum and feel an incredible amount of torque right off the starting line. If you’ve ever chosen the Leaf as your vehicle in Gran Turismo, you’ll know that it can go from 0 to 60 in seven seconds flat. As a result, getting on the 110 freeway gives me the dual pleasures of tree-hugging and getting all Fast And Furious at the same dang time. 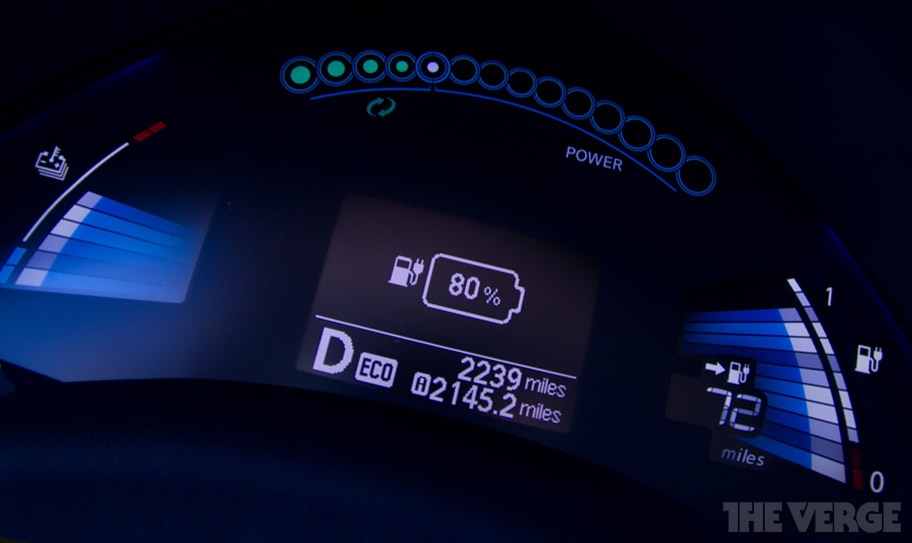 Four dots in the green means your car is its own power plant.

But "flooring it" in a Leaf isn’t without its consequences. The in-dash accelerometer is a series of 14 dots — 10 white dots indicate the level of power you’re pulling from the battery, and a heavy foot will light all of them up. When you let up on the gas, the white dots disappear and four green dots blink on, indicating that the centrifugal force of the car is being harnessed to send power back to the battery. It’s an elegant way to monitor the real-time efficiency of your driving behavior — every second behind the wheel turns into a resources-management game. On a recent trip up the mountainous Angeles Crest Highway, I used a ton of white dots to propel the Leaf up a long, steep slope. But on the way down it was all greens, and by the time we were at the base of the mountain the battery had regenerated most of the energy it had used on the ascent. Achievement unlocked, my gamer-brain whispered at the end of the trip. This Leaf Climbed Bear Mountain...and Lived To Tell the Tale. 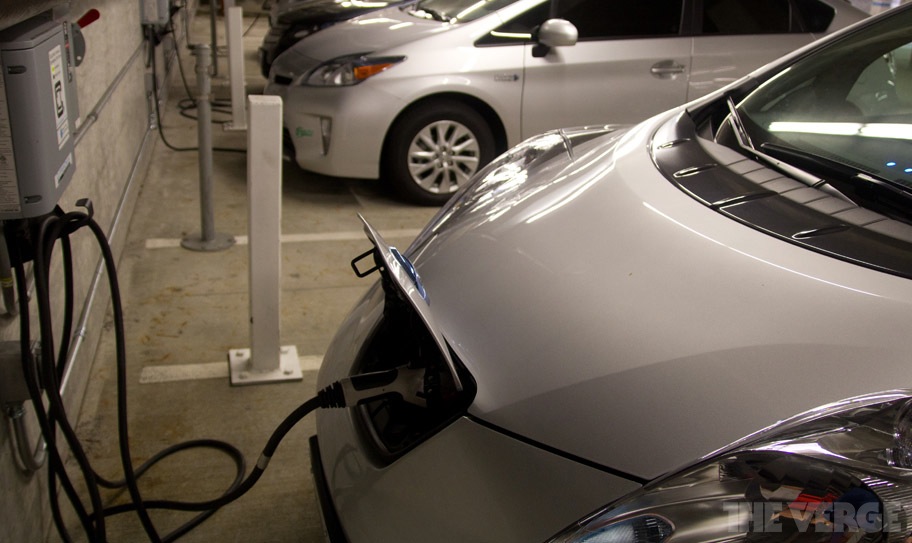 Free 240v charging and parking zones, like this one in Manhattan Beach, are mostly occupied by Volts and Leafs.

There are currently three types of chargers available for most EV owners, and understanding them is as important as understanding why you shouldn’t fill your petroleum vehicle up with diesel. Every Leaf comes with a trickle charger. Just like a cellphone adaptor, one end plugs into a grounded three-prong 120v outlet and the other end plugs into a socket on the nose of the car. This is the most widely distributed way to charge, as it essentially turns any electrical outlet into a gas station — but with current technology it takes almost 21 hours for a fill-up.

The next step up is to use a 240-volt supply; if you have an electric clothes dryer you already have one installed. This cuts the charge time down to around six hours, and it’s relatively easy to get a 240v line installed at any residential or commercial property. Many public parking areas offer free 240v charging: the ones in EV-only parking slots at the Whole Foods in Pasadena are covered in sellable ad space, which is a smart way for the high-end grocer to recoup some of the money it loses to increased energy bills. At other high-visibility locations, like the Los Angeles County Museum of Art, the chargers are visibly sponsored by Nissan. At shopping malls like the Americana in Glendale, a commercial venture called Blink offers charging for a dollar an hour. The semi-wide distribution of EV owners means that there’s usually at least a free space or two available to charge. In order to keep up with rising EV sales, more of these will need to be installed in coming years to avoid long lines at the pump.

But for a peek into the not-so-widely-distributed future of EV charging, you’ll need to find a big, honking 480v power supply. Unlike getting a 120v or 240v line, a 480v installation is an expensive and complicated procedure that requires a big investment of time and money. The Los Angeles Department of Water and Power places a premium on high-voltage delivery, and the charging stations themselves are serious machines. The whole package costs around $30,000. In 2013, incentives from the federal government and from Nissan itself brought the cost down to around $10,000, but that money is hard to come by now. Finally, the port itself is about twice as big as the 240v socket — it’s a technical spec called CHAdeMO, an add-on that tacked $1,300 onto the price of our Leaf. While the big chargers are commonplace in Japan, you’ll usually only find them at Nissan dealerships in the USA. 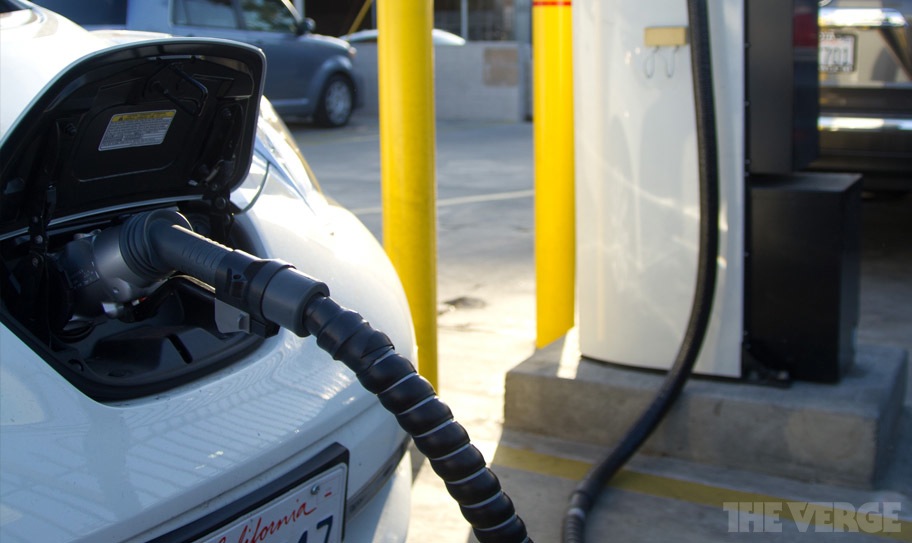 480 volts of raw CHAdeMO at the Downtown LA Nissan dealership.

When you do find one — and when it’s not already in use by another Leaf owner — using a CHAdeMO charger is one of those experiences that makes you feel like you’re already living in the future. The big white boxes look like slimmer gas pumps, complete with LCD displays and a bank of four exhaust fans that cool down the high-current circuitry inside, which brings you up to an 80 percent charge in about 20 minutes. The big socket and heavy cord feel a lot like a gas pump, and sitting inside the Leaf as it charges feels kind of like sitting on top of a nuclear power plant. Which feels awesome.

But 99 percent of the time, charging our car is a much less dramatic affair. On a normal day we don’t drive more than 40 miles. The trickle charger is permanently plugged into a socket inside the house. I park the car, pop open the charging port, and snap in the handset. The next morning, I walk to the car, unplug the handset, and replace the cord in its holster. When I turn the car on, the indicator reads 100 percent. The whole process takes about 20 seconds. The result? I never visit the gas station. My house is my gas station. This subtle paradigm shift is probably the most rewarding part of Leaf life. I can safely say that I’ll never buy a gas car again.

Potholes on the green road

Okay, confession time! I still own a gas car — a 2007 Honda Fit — and can’t envision life without it anytime soon, simply because we often take road trips outside of LA County. Although mapping apps like PlugShare can help to find far-flung outlets, there simply aren’t enough charging resources to make long-haul trips practical in the Leaf. The city of LA placed "Electric Vehicle Charging Station" signs on most of the major freeways throughout the city years ago, but when I went to investigate one off Interstate 10 I found that the charger was actually a single 240v plug on the top floor of a parking lot reserved for Paramount employees. 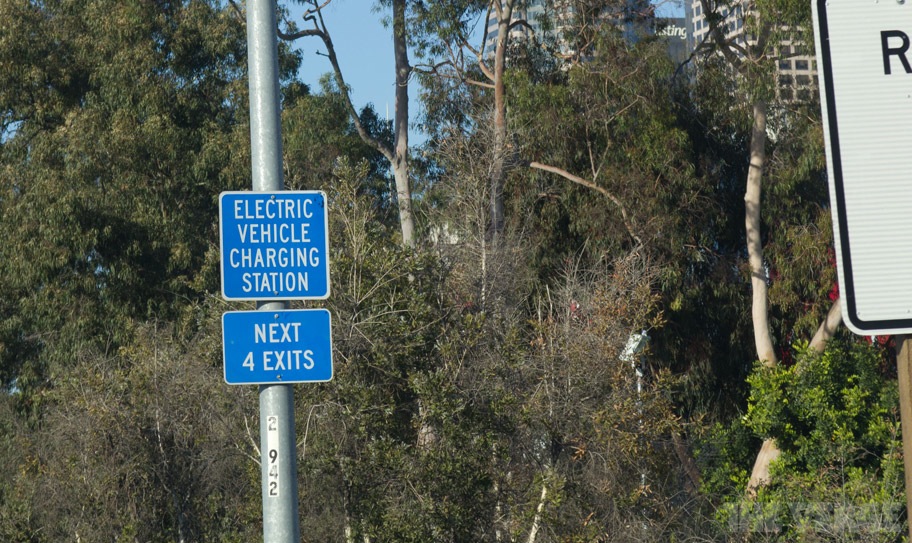 And it’s not like I’m charging my car with green rainbows and California sunshine — like you, my electric power is generated by a nasty cocktail of burnt coal and natural gas, with a dash of solar and hydro mixed in for a hint of renewable flavor. I pay 13.92 cents per kilowatt-hour to the LA Department of Water and Power for that privilege. My bill has doubled since we bought the Leaf, from 165 kWh a month to 330 kWh. But that’s just a $23 difference, which pales in comparison to the hundred or so bucks I used to spend every month on gas. There’s also the added eco-benefit of using the grid’s static distribution structure to power my car, which saves the money and emissions that would be used to transport gas from god-knows-wherever to Southern California.

The LADWP does offer a 2.5-cent-per-kilowatt-hour discount for EV owners, but the process of getting it proved to be a logistical and economic nightmare. In an effort to green my driving, I enlisted the services of Elon Musk’s SolarCity to bring solar power into my energy equation. But getting the panels on my roof proved far too expensive to be practical and I was disqualified from their massively popular zero-down installation. So the entire EV equation isn’t as earth-friendly as I had originally anticipated, but it’s unambiguously a step in the right direction. While Tesla brought the EV future to a privileged few with its $70,000 Model S, Nissan’s democratizing economies of scale have created a new class of people who are dependent on an infrastructure that doesn’t exist across America. But Leaf life seems to be spreading like hay fever, at least out here in what was once Prius country. Since the price drop in 2013, there are Leafs everywhere in Los Angeles. Instead of being eco-pioneers, we’re now part of a larger —and more economically persuasive — group of regular drivers. 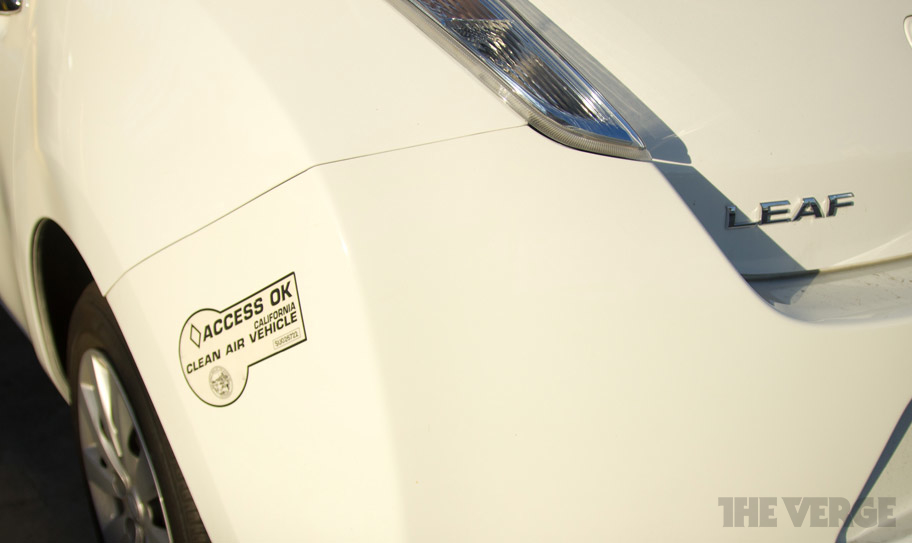 As thrilling as may be in 2014, driving electric is getting more banal every day. A subtler and infinitely cooler thrill will arrive in the next few years as electric motors become the silent majority, whirring down highways everywhere in an always diminishing sea of internal combustion engines.