Today Square announced Square Feedback, a new feature that lets merchants add interactive comment cards to their receipts. For $10 per month, the feature adds a "How was your experience?" section to the top of every Square digital receipt, at which point the consumer can press a smiley face or sad face to indicate their satisfaction. These buttons pop the user out to a webpage, where they can add more details if they want to, like what they were dissatisfied about. The entire interaction is anonymous — the seller only sees the user's review and receipt contents.

"How was your experience?"

"The ability to work things out one-on-one is something really powerful," a Square spokesperson told The Verge. "That [customer] might have gone and put that experience on Yelp or tweeted it to their friends." Feedback is marketed as a way for any Square seller to add "instant customer service" on the fly, but what's more important is how Feedback is priced. The feature is the first subscription service for Square, which ordinarily makes money by taking a small piece of each credit card transaction. Square can't build a big business on top of these tiny margins, many have theorized, but Feedback, priced at $10 per month, operates on top of the credit card system. Merchants who buy Feedback create a new monthly revenue stream where Square's in control of the margins. 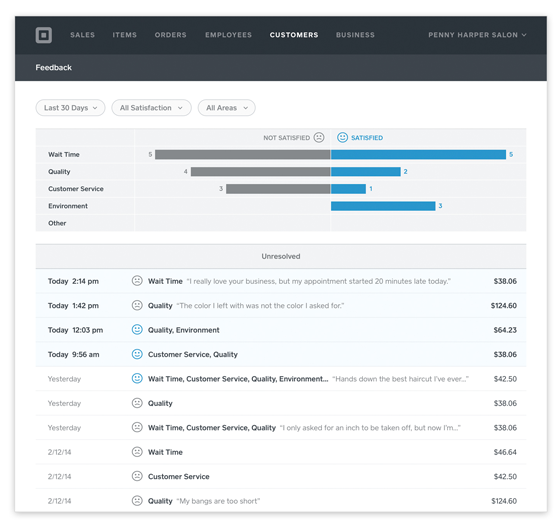 When I asked if Square would consider adding more new features as paid subscriptions, a Square spokesperson said "Yes, definitely." But perhaps not always. Square recently added inventory management to its feature set, but made the feature free, like all of its point-of-sale and analytics features up to that point. It's not yet clear how Square will choose to price upcoming features — paid or free — but one thing is certain. As Square looks to create new revenue streams that don't rely on tiny interchange fees, it will have to think more about paid services. Square originally marketed itself as a beautiful, functional middleman between companies like Visa and consumers, but as time has gone on, the credit card companies (and other services like PayPal) have caught up.

Meanwhile, Square's Wallet payments app was recently shut down, and the company's free Cash person-to-person payments solution is in all likelihood losing money. Square has the unique ability to create modern, fully-integrated payment experiences, but has offered most of these services for free thus far. As a cash crunch looms, Square's going to need to ask someone to pay up.