Share All sharing options for: Paralyzed race car driver will control car by moving his head at the Indy 500

A paralyzed race car driver will take to the track for the first time in 14 years prior to this year's Indianapolis 500  — and while he won't be participating in a race, he will be driving thanks to a human-to-machine interface that lets him control the car with his head movements. Sam Schmidt was diagnosed as a quadriplegic in 2000 after a crash during a practice lap severely injured his spinal cord, but thanks to a collaboration with Arrow, he'll drive four laps in a specially-outfitted 2014 Corvette C7 Stingray at the Indy 500 on May 25th before the full race kicks off.

The car itself is equipped with infrared sensors and cameras that'll read Schmidt's head movements and translate them into directions to the car's onboard CPU. Schmidt himself will be wearing a hat outfitted with reflective infrared markers, and he'll also have a pressure sensor in his mouth that he can bite down on to brake and stop the car. Turns and acceleration are mapped to Schmidt's head movements, and an onboard GPS that updates 1,000 times per second will help correct course if necessary. It'll respect "virtual curbs" set one meter from the track edge — if the car drifts into these curbs, the GPS will notify the CPU and adjust the car's trajectory.

For safety's sake, Schmidt will be accompanied by someone sitting shotgun who can take control of the vehicle if necessary, and pit workers will also be able to stop the car remotely. But ideally, Schmidt (who has run a foundation seeking to find a cure for paralysis) will control the so-called "semi-autonomous motorcar" (SAM) for the duration of his time on the track. 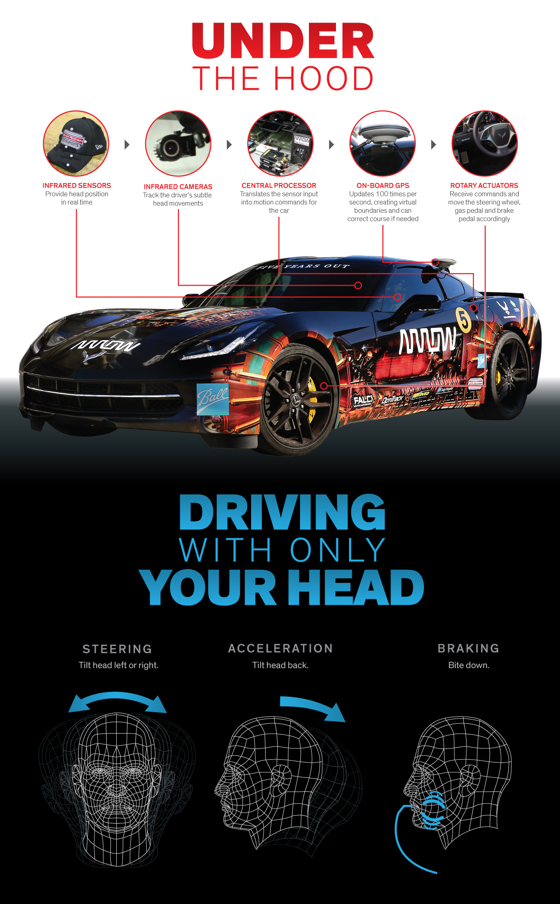