Revised proposal opens rules for public debate, but the specter of a tiered internet remains

The FCC has voted to accept Chairman Tom Wheeler's proposal for a new net neutrality framework, kicking off a longer rule-making process that will conclude in the next several months. And while the new proposal has been amended from an earlier, more controversial text, it leaves open the question of internet "fast lanes," an issue that many see as fundamentally undermining net neutrality.

The new proposal builds on the 2010 Open Internet Order that was struck down earlier this year, but it's seeking comment on a number of issues that have proved central to the net neutrality debate. Broadband providers would have to hold to a minimum level of quality for any service, but otherwise, they're only required to adhere to "commercially reasonable" standards. The agency is asking for comment on what those standards should be, including whether ISPs should be barred from allowing companies to pay for better service. It's also attempting to create oversight for companies, proposing an ombudsperson who would represent internet users and investigate possible violations of the order. Wireless broadband providers have long been held to looser standards than wired ones, but the proposal encourages reevaluating this.

"Prioritization is not a bad word."

Perhaps most notably, Wheeler is asking for input on what laws the FCC should use to regulate net neutrality. The proposed rules use Section 706 of the Telecommunications Act, which allows the agency to promote broadband competition. In January, a federal court took issue with the FCC's use of this rule, saying that it was trying to treat companies like more heavily regulated common carriers and scrapping virtually the entire order. But the FCC latched onto a piece of the decision that gave it more limited powers under Section 706, promising to create a new rule that kept the spirit of net neutrality alive. It's been positioning its defeat as an opportunity ever since.

A leaked version of Wheeler's recent proposal, however, showed how limited that authority might actually be. By allowing companies to pay for better service to customers, it violated the broad premise of net neutrality — that "all bits should be treated equally." The most obvious alternative to Section 706 is reclassifying broadband providers under Title II authority, making them common carriers in at least some respects. Wheeler has consistently kept that option on the table, threatening to pull the trigger if ISPs abuse their power — and, during the meeting, he maintained that they have plenty of incentive to do so. Here, he's asked for comment on how reclassification could actually work.

.@TomWheelerFCC "There is ONE Internet. Not a fast Internet, not a slow Internet; ONE internet." #NetNeutrality

Confirming previous reports, liberal commissioner Jessica Rosenworcel said that Wheeler made "significant adjustments" to the proposal over the past weeks, and it's quelled some criticism. The text that made it to the meeting is much more open-ended than the first leaks suggested. But the process has caused strain within the FCC. Republican commissioner Ajit Pai claimed he and fellow conservative Michael O'Rielly were kept in the dark about the proposal's revisions; both Pai and Rosenworcel had previously asked for a delay of the vote. Unsurprisingly, Pai and O'Rielly condemned the plan. "Prioritization is not a bad word," said O'Rielly. "It is a necessary component of reasonable network management." Wheeler, Rosenworcel, and Mignon Clyburn overruled them in a vote.

"I understand this issue in my bones."

Wheeler himself said he was attempting to start a conversation about regulation, repudiating the idea that he wanted to create an internet fast lane. "Nothing in this proposal by the way authorizes paid prioritization, despite what has been incorrectly stated today," he said. "Personally, I don't like the idea that the internet could be divided into haves and have-nots, and I will work to see that does not happen." His description of the plan stressed the existence of a baseline level of service, or "what the consumer has paid for," saying that prioritization would never be able to degrade service. "When a consumer buys a specified bandwidth, it is commercially unreasonable ... to deny them the full connectivity and the full benefits that connection enables." He also made perhaps the most dramatic statement in an already contentious meeting. "As a former entrepreneur and venture capitalist, I know the importance of openness. I will not allow the national asset of open internet to be compromised. I understand this issue in my bones. I have scars from when my companies were denied access in pre-internet days." 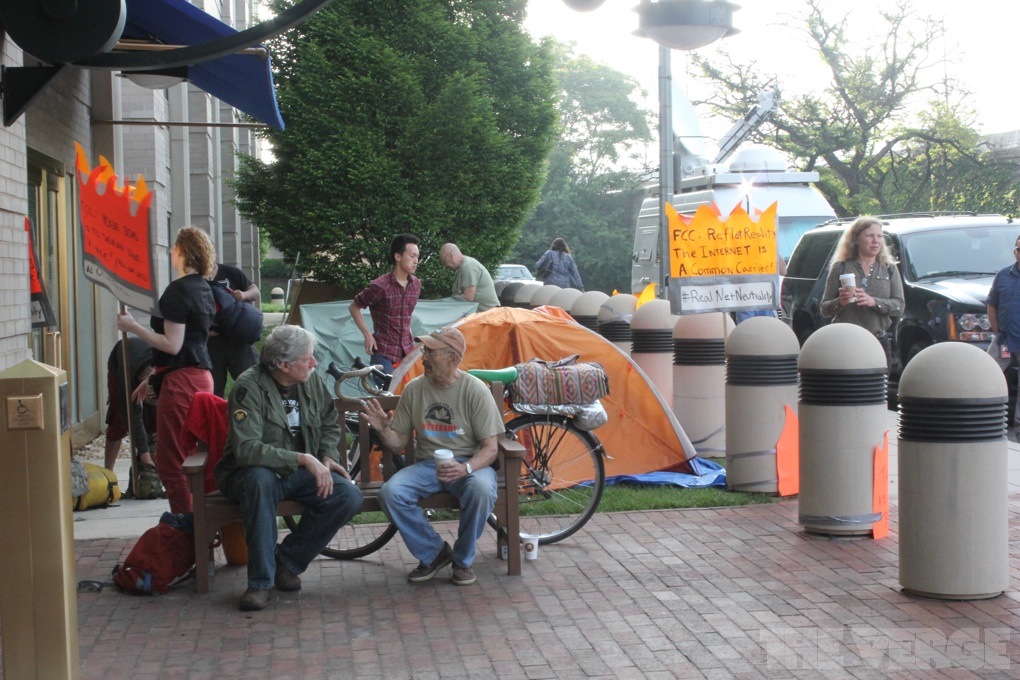 Well ahead of the meeting, activists gathered outside the FCC offices, some camping for a full week on a small strip between the FCC and a highway. According to Kevin Huang, campaign manager for Fight for the Future, they received a friendly reception; among others, Wheeler and Pai came out to speak with critics. "I don't think the FCC wants any more bad press," Huang said. While some protested outside as the meeting began, others filled the main conference hall and overflow rooms, a few loudly denouncing plans to weaken net neutrality. "We're going to move thorough this process today, and disruption doesn't help getting to the point where the American people can provide input to the process," said Wheeler, after three people were removed by security as the meeting began.

While net neutrality supporters have critiqued Wheeler's plan as too timid, saying that prioritized service automatically creates a "slow lane," conservatives have urged him to categorically reject Title II reclassification. A letter from House Republicans warned against adopting "antiquated legislation" that would "derail one of our economy's most vibrant sectors," echoing claims that internet service providers can provide better service if they're allowed to experiment with pricing. Senator Ted Cruz (R-TX) is reportedly drafting legislation that would strip the FCC of its current authority to promote broadband competition, which it uses to justify net neutrality. No matter what plan is ultimately adopted, its limits will likely be hashed out through litigation. Comcast executive VP David Cohen has argued that ISPs have the right to prioritize traffic, and would still be able to do so under common carrier rules. "We are not sure we know what paid prioritization, or what a fast lane, is," he said on Wednesday. "I believe that whatever it is, it has been completely legal for 15 or 20 years."

Now that it's passed, the proposal will move into a 60-day public comment period, followed by 60 more days for response. Senior counsel Gigi Sohn has previously said the agency hopes to have a framework in place by the end of the year.