Has the look and feel of the HTC One, but lacks many of its features

As it was last year, so it is in 2014. HTC's flagship Android phone, the One, is getting a downsized variant in the form of the One mini 2. The new handset looks and feels very much like its more expensive sibling, however just like the 2013 mini, it eschews a number of features and design elements. The One mini 2 uses the same aluminum back (and comes in the same color options) as the One, but combines it with a plastic border around the screen. There's no UltraPixel camera this time around, with HTC instead using a 13-megapixel sensor that seems to take some pretty decent pictures.

Stereo BoomSound speakers frame a 4.5-inch 720p display, and there's a 1.2GHz quad-core Snapdragon 400 chip inside. Those mild upgrades from yesteryear's One mini are accompanied by the addition of NFC, a miroSD card slot, and a larger 2,100mAh battery. The One mini 2 thus occupies an odd middle ground between its predecessor, last year's One, and the 2014 flagship. It combines elements of all three and is in the middle of the pack in terms of size too. 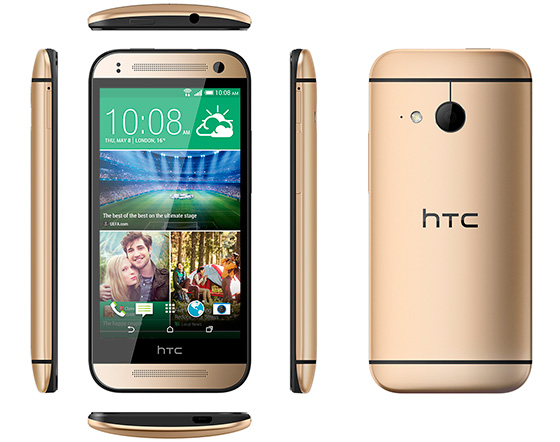 In announcing the new phone, HTC CEO Peter Chou describes it as "the perfect choice for those who love the iconic design of the HTC One (M8) yet want something more compact." The One mini 2 runs Sense 6 atop Android 4.4, just as with the M8. Still, there are compromises such as the loss of the IR blaster, the Duo camera, and the Motion Launch unlocking gestures that added some unique appeal to the company's leading handset. And while the processor is fast, it's obviously not as quick and responsive as that of the flagship One.

Considered in isolation, the One mini 2 looks to actually be a very appealing device. It maintains HTC's traditional strengths of excellent displays and speakers, is built out of sturdy stuff, and feels ergonomically sound. Much as Motorola showed with the Moto G, a humble spec sheet need not prevent a smartphone from being wildly popular — provided it's priced correctly. That will be down to each carrier to determine together with HTC as the One mini 2 makes its debut across Europe, the Middle East, Africa, and Asia in June. No details about a US release are being divulged yet.