Throwback Thursday is the secret to Timehop's runaway success

Throwback Thursday is the secret to Timehop's runaway success

Timehop is difficult to explain.

It’s a time-capsule app and a content aggregator. It’s This Day In History, just for you — the photos you took last year and the year before, surfaced today. For its three-year history, the app has provided a daily dose of "digital nostalgia" for a small group of dedicated users, but never achieved critical mass. You might attribute Timehop’s sleeper status to the company’s esoteric message. But then, without any warning or epic new feature addition, Timehop hit the top 50 in the App Store in late April.

More impressive than reaching the top 50, however, is staying there. Fads like Flappy Bird or startups with massive marketing budgets like YPlan often hit the App Store top 10, but then disappear as quickly as they came. Timehop’s ascension, on the other hand, looks completely organic, and shows no signs of dropping off the map. If anything, Timehop’s growth is still surging — and it’s peaking every Thursday.

So what’s the company’s secret? Timehop finally embraced the message the internet was sending all along.

With @timehop, everyday is #throwbackthursday #tbt

In late 2013, CEO Jonathan Wegener discovered that his users were describing Timehop better than he ever had. "With @timehop, everyday is #throwbackthursday," tweeted one user. "Timehop makes it TBT every day of the week," tweeted another. If you’re not familiar, Throwback Thursday, also known as TBT, is a trend where people post old photos to social media every Thursday. #TBT and #throwbackthursday are two of the most popular recurring hashtags on Instagram, Facebook, and Twitter today. #TBT alone has accumulated 200 million posts on Instagram to date, where last year it had only 40 million.

Timehop's position in the App Store leaderboards, peaking each Thursday

TBT was catchy, Wegener and his team admitted, and Timehop users were indeed sharing more on Thursdays. Perhaps by piggybacking on the popular hashtag, they thought, Timehop could finally achieve the virality it had been seeking for three years. Wegener and co. pushed out a few important changes to reflect its new goal. In late February, Timehop added an Instagram sharing button, and branded photos with a small Timehop logo and a banner dating the photo.

Timehop users were already sharing lots of content to Instagram by screenshotting Timehop, but now, it was finally clear how they had been finding all these old photos in the first place. The strategy worked, as evidenced in part by Timehop’s hilariously cyclical rise and fall in the App Store charts. Every Thursday, Timehop downloads surge, then bottom out on Sunday, then surge again on the following Thursday. Adding an Instagram button increased Timehop shares by 20 percent, and launching an Android app in March doubled shares again. These upgrades increased the number of people using Timehop, but what’s kept these users engaged is embracing their most common behavior: posting on Thursdays. 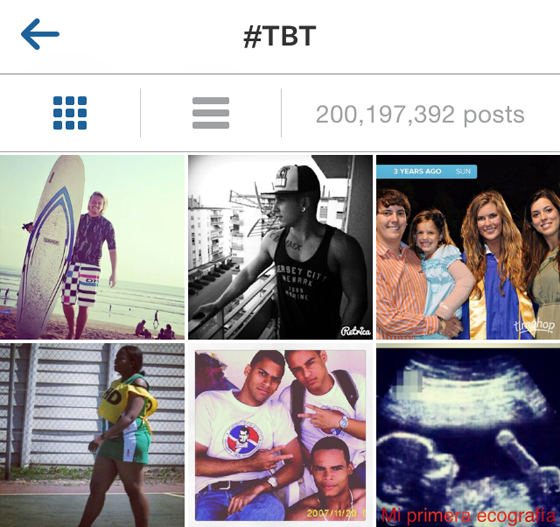 More than half the people who install the app turn into daily users, says Wegener, and now, over a million people check Timehop every day. The app’s user base is largely high school- and college-aged, he says, and 75 percent female.

More than half the people who install the app turn into daily users, Wegener says

"Reminiscing doesn’t have a home online yet and we want to be that place," Wegener told me last year. "What that looks like, I’m not sure." It seems that Timehop has finally defined its utility. To new users, Timehop is the easiest way to find fodder for your #TBT posts. Long-standing Timehop users, however, might come to realize that it’s actually worth a lot more — that it’s about resurfacing old memories that might otherwise be relegated to the depths of your Facebook Timeline or Instagram profile. One university even changed its mascot and colors for Senior Week to look like Timehop and celebrate reliving college memories.

"We’re betting on a trend that is clearly the right trend — that your digital history is only increasing," says Wegener. Timehop is about making these memories new again. Now, if only it can teach its users that flipping through old photos is fun on Mondays, Tuesdays, and Wednesdays too.