Virtual reality for chickens would simulate a blissful free-range life

Virtual reality for chickens would simulate a blissful free-range life

A world where all humans were living inside of virtual reality would be considered dystopian, but what if humans were to impose that same existence on the animals we raise and often subject to poor conditions? That's what one designer is proposing with the fictional company and service Second Livestock — effectively a combination of the Oculus Rift and multiplayer life sim Second Life. Second Livestock envisions tiny virtual-reality headsets that could be put on chickens, and presumably other livestock as well, to give them the impression that they're living a wonderful, free-range life.

"The goal of the project is to raise that question of how do we know what’s best, or what is humane treatment," designer Austin Stewart tells Ames Tribune, "and also to look at how we treat ourselves. We’re living in these little boxes, just like chickens." Second Livestock is obviously not the most feasible proposal, but Stewart's goal is to have people take it seriously and consider their reactions. And even knowing it's a fake, reading through the fictional company's website is both humorous and dark: Second Livestock's proposed treatment of chickens would also include clean spaces, room to move, and an organic diet — better than many actual chickens are treated. 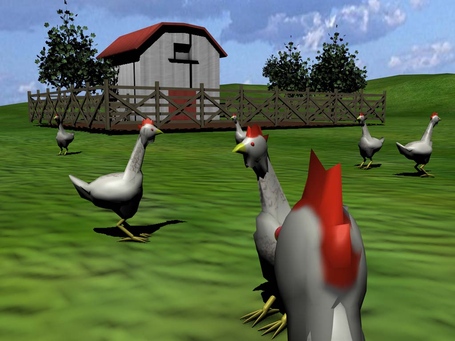