Weird stuff happens a lot in San Francisco, and then there's this: a giant, orange Amazon locker that's appeared without warning, or explanation. Amid the throngs of tourists, Amazon's put what it calls "Giant," an aptly-named variant of its locker system that can be found in 7-11 convenience stores, and other retailers. It's plugged into power, and appears fully functional, with a keypad and display screen where people can plug in their confirmation number and collect things they've purchased online.

"Hello my name is Giant"

Short of that, there's nothing explaining what the locker is doing there, or if it will be a permanent fixture in the city. Nor does it appear on Amazon's list of available lockers in the city. Amazon did not immediately respond to a request for comment on the Giant locker, though The Wall Street Journal says it's part of an event that Amazon plans to hold tomorrow, presumably to discuss whether this is just the start of a larger plan to roll out the massively-sized outdoor lockers in other cities. 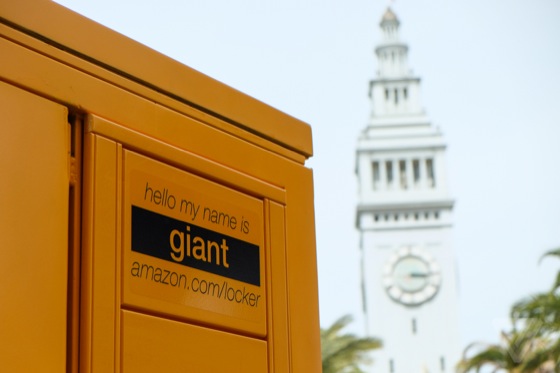 Amazon currently has eight lockers strewn about downtown San Francisco, with most of those located in the Northeast part of the city. The Giant has been placed just across the street from San Francisco's Ferry building, which is not only a major transportation hub, but also a tourist attraction with heavy foot traffic.

Amazon began piloting its locker program near the end of 2011, and has increased it to a number of locker locations since then, ending up in places like Staples and Radioshack (which jumped ship from the program last year). The lockers not only give the online retail giant a physical presence, but also lets urban dwellers pick up and return products from somewhere besides their home or office, and without having to deal with various delivery services. That's become especially important as shipping fees have gone up, something that's led Amazon to increase the price of some of its services, like Prime.