The best small camera you can buy is getting even better

Share All sharing options for: The best small camera you can buy is getting even better

The world's best pocketable camera just got better. After delivering the goods with last year's RX100M2, Sony is back today to announce the RX100M3. And like its predecessor, the goal here is to refine and push forward a camera that's already received accolades from users and overwhelmingly positive marks from the press. Perhaps the most important ingredient here, the 20.9-megapixel CMOS sensor, remains unchanged. But Sony has made improvements to nearly everything surrounding it. Take the image processor for instance; it's now the same Bionz X chip found in the A7 and A7r.

Same sensor, better everything else

The most immediate change you'll notice is the lens. It can now go wider than the RX100M2 — 24mm compared to the previous 28mm limit — and while it still starts at an aperture of f/1.8 when fully zoomed out, it only drops to f/2.8 at the long end of the range. It's a little shorter at the telephoto end, topping out at 70mm whereas last year it could extend to 100mm. But the RX100M2 was already fantastic in low light conditions, and this camera should handle itself even better thanks to the more versatile aperture. The slight tradeoff in reach will be well worth it for many.

But there's another equally impressive feature that's hidden inside the camera when you first pick it up: a retractable electronic viewfinder. Sony seems to have pulled off a masterful feat of engineering here. All it takes is the flick of a button when you want to call upon the high-res, 1.4-million-dot EVF. Then once you're done, it simply disappears back into the body. A retractable EVF on a camera that fits in your pocket. Color us impressed. 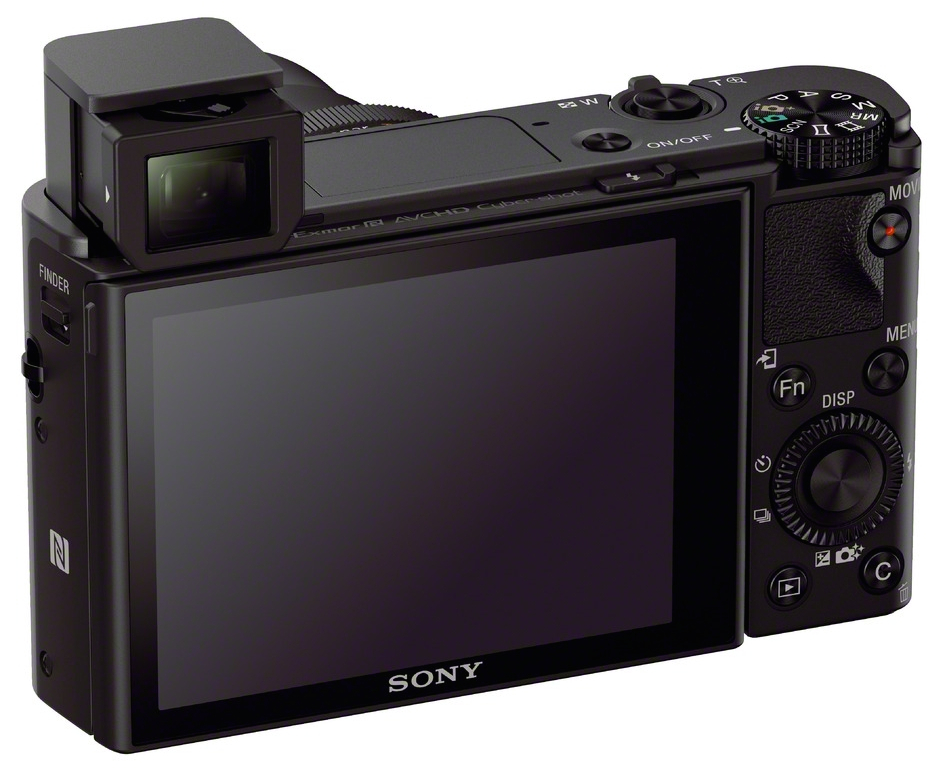 The third time around is also the charm for the rear LCD. It now tilts a full 180 degrees, making the RX100M3 better suited for selfies and some of your less serious moments. As for new in-camera features, Sony is touting a new Lock AF mode that continuously tracks a moving subject by adjusting the AF frame around it. And there's now a "zebra" function that overlays white and black lines on any sections of your current shot that are overexposed. Finally, Sony is talking up the RX100M3's video capabilities; an XAVC S mode allows for video recording at up to 50Mbps with "minimal" compression even in scenes filled with movement.

The RX100M3 will be released in June for $799.99. It's a pocketable camera, but Sony also wants to sell the idea that this can be the do-everything camera for many consumers. Last year it came awfully close, and we can't wait to put its latest effort through the paces in our full review.

And while it's by no means aimed at the same customers, Sony has also announced pricing and availability for the video-focused A7s. Videographers will be able to purchase one in July for $2,499.99. It's expensive, but remember that Sony's latest full-frame camera can shoot ultra high-res 4K video and basically see in the dark. That sort of luxury never comes cheap.