Circle wants to be your friendly neighborhood bitcoin bank

Share All sharing options for: Circle wants to be your friendly neighborhood bitcoin bank

The implosion and subsequent liquidation of bitcoin exchange Mt. Gox last month played to the worst fears about digital currencies. Confusing to use and volatile as a store of value, bitcoin has also been the frequent target of hackers, thieves, and incompetent businessmen. Despite bitcoin’s appeal to venture capitalists eager to profit from a new financial system, the value for the average person remains elusive.

Circle, a highly anticipated new bitcoin startup that has raised $26 million, is hoping to change all that. The company, which is opening its service today in a limited release, hopes to be your friendly online bitcoin bank. Its web-based interface lets you deposit US currency and see it converted instantly to bitcoin without any fees. It physically isolates your bitcoin keys in cold-storage vaults and requires multiple "signatures" to bring them online. Its deposits are 100 percent insured, and it complies with US money transmitting and anti-money laundering laws. "The focus is on making this easier for people to adopt," says the company’s CEO, Jeremy Allaire, who previously helped create the Macromedia (later Adobe) Flash platform and co-founded the video platform Brightcove.

"The focus is on making this easier to adopt."

Specifically, the focus is on making bitcoin easier to use for transactions as opposed to merely fueling speculation by investors. Its web interface offers a streamlined way for you to send or request money, review your transactions, and access information about your account. You can tie your bank account and credit cards to your account to make it easier to add and withdraw funds, or you can operate entirely in bitcoin. The important thing is that customers begin to see bitcoin as a convenient way to conduct transactions. "We’re not driving people to buy and hold bitcoin," Allaire says. "We want to drive that utility value and remove as much friction as possible." 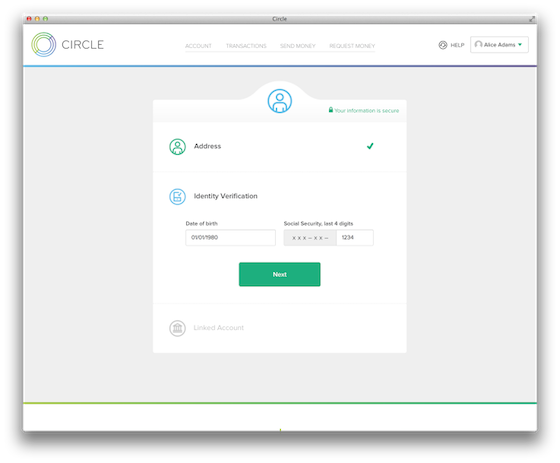 It won’t be an easy sell — at least not in the United States, where cash and credit-card transactions are relatively simple already. It remains unclear why the average person would conduct a transaction in bitcoin instead of cash, although advocates for the cryptocurrency say that merchants may eventually offer discounts to bitcoin users that take advantage of lower transaction fees. The service may have more appeal in countries where the traditional currency is unstable or being dramatically manipulated by the government, such as Argentina.

Circle faces a number of competitors in the race to become the leading provider of bitcoin services, including Coinbase and Bitpay. Its success also hinges on how bitcoin comes to be regulated at home and abroad. Many current users of bitcoin enjoy it for its semi-anonymous nature; Circle asks its customers to verify your phone number and email address. Linking a credit or debit card requires submitting your name, address, and the last four digits of your Social Security number. "If your mission is to hide in the dark shadows of the web, we’re probably not going to be the service for you," Allaire says.

Circle isn’t devoting much time at the moment to the revenue side of its operation, but it says it will make money on the "spread" from acquiring and converting currency at market rates. Over time, it's easy to imagine the company adding fees for services that it charges to merchants.

But before any of that can happen, people have to trust Circle to do what Mt. Gox and others have failed to do: make a bitcoin wallet that’s secure and easy to use. The site looks clean and simple in screenshots, and the limited rollout of accounts to the general public will help Circle test for weaknesses. But the larger questions around bitcoin businesses remain squarely outside Circle’s control.