The first picture taken on the set of the next Star Wars movie has been revealed, showing that principal photography on Episode VII has officially begun. The photo, shared by J. J. Abrams' Bad Robot production company on Twitter, was tweeted alongside the hashtag #dayone, and shows a clapboard emblazoned with two names: Abrams', and that of his cinematographer, Dan Mindel.

The Star Wars sequel was set to commence filming this month at London's Pinewood Studios. While the tight-angle picture doesn't show any of Episode VII's sets, actors, props, or even where it was taken, that hasn't stopped fans from speculating on plot points. Filmmaker Joseph Kahn took to Twitter to analyze some of the more arcane language on the clapboard, suggesting that the camera was set up for a visual-effects shot. 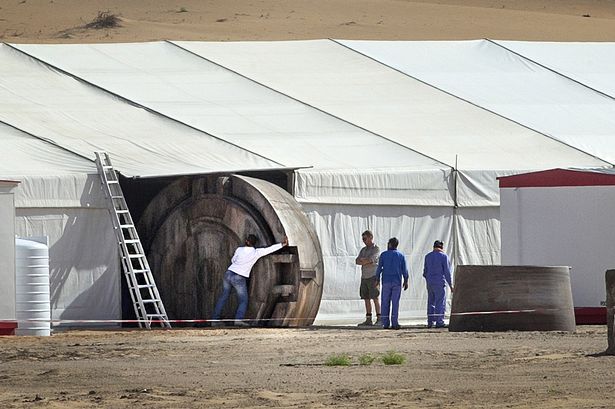 A smear of a sand-like substance across the clapboard suggests that Episode VII — due for a December 2015 release date and boasting most of the original trilogy's main actors — could be returning to desert planet Tatooine. Abu Dhabi is rumored to be a stand-in for Luke Skywalker's (adopted) homeworld, with Disney chairman Alan Horn having already said "some second-unit" filming had taken place in the country. Photos taken by Abu Dhabi's The National show a crew working on a covered set in the midst of sand dunes, while sources for the publication reported seeing "shuttle-like" vehicles, buggies powered by jet engines, and a "big, centuries-old-looking market."