Share All sharing options for: Amazon's mysterious giant locker in San Francisco will give birth to a Nissan

Amazon's big, orange, mysterious locker that appeared in downtown San Francisco yesterday will not be a permanent fixture in the city, and is instead part of a marketing blitz for a Nissan automobile. The box, dubbed "Giant" by Amazon, is the largest Amazon locker of its kind, and showed up yesterday without explanation. Overnight, Amazon added a large Nissan logo to the front of the locker, as well as a #giantlocker hashtag, as part of a give away for one of Nissan's vehicles, Amazon tells The Verge. Amazon is also giving out free music downloads, and $5 gift cards to those who use the hashtag in a tweet or on a Facebook post.

Nissan sells its cars through Amazon, though people still need to go through local dealers as part of the transaction. That didn't stop one of those vehicles from being delivered to a buyer in a giant Amazon box on the back of a flatbed truck this past January. The winner of this particular giveaway could get a Nissan Rogue, Amazon says. 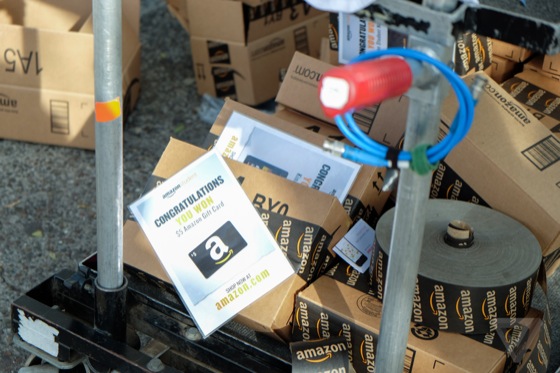