Three years ago, a family of rural farmers stumbled across an incredible paleontological site on their land in the Patagonia region of Argentina. The family notified nearby Museum of Paleontology Egidio Feruglio (MEF), and now researchers at the site have unearthed what they believe is the largest dinosaur ever. It's estimated that the massive beast weighed almost 80 tons (80,000 kg) and stood 65 feet tall (20 meters) when it walked the earth some 95 million years ago during the Late Cretaceous period. Measurements suggest it was over 130 feet (40 meters) from its head to the tip of its tail. That means it was roughly as long as a 13-story building.

But this truly gigantic dinosaur was a herbivore. The specimens found in Argentina's Chubut province (which is part of the Patagonia region) belong to the sauropod group of dinosaurs, which are noted by their small heads, thick, pillar-like legs, and long necks and tails. Perhaps the most well-known sauropod is the Apatosaurus, which often goes by the name "Brontosaurus" in pop culture. But this latest sauropod is twice as long and up to four times as heavy, and researchers are classifying it as a new species of Titanosaur, which is a group of extremely large sauropods. 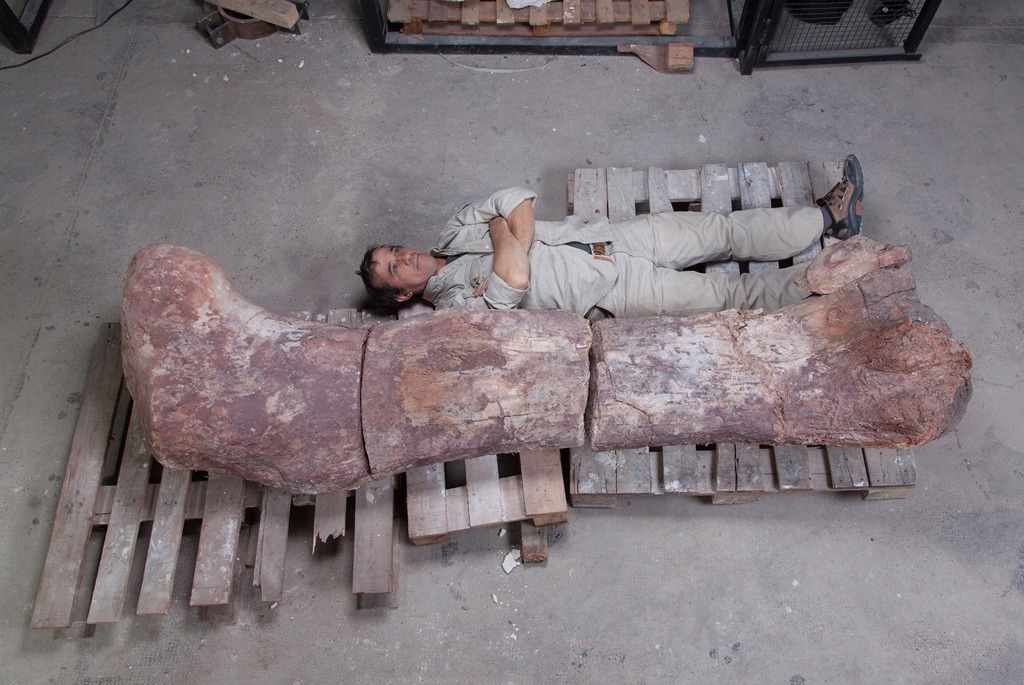 One of the massive fossilized femurs used to estimate the size of the dinosaur. (Museum of Paleontology Egidio Feruglio / José María Farfaglia.)

Paleontologists led by Dr. José Luis Carballido and Dr. Diego Pol of MEF found seven adult specimens in the same spot, and the roughly 200 fossils discovered so far are in wonderful condition. Among the cache of fossils they've found significant pieces of the neck, back, and legs, as well as "most of the vertebrae of the tail," according to a press release from MEF. "It's a real paleontological treasure," says Dr. Carballido. He suggests that the adult individuals likely died in the same spot, perhaps huddling around a dwindling water source.

By measuring the diameter of load-bearing bones like the femur and humerus, the team was able to estimate the size and weight of the dinosaurs. Their findings just beat out another very similar Titanosaur, Argentinosaurus (pictured above), which has long been considered the largest dinosaur ever. Argentinosaurus is estimated to have weighed roughly 73 tons. It, too, was discovered in the Patagonia region of Argentina, which is a hot spot for dinosaur fossils. 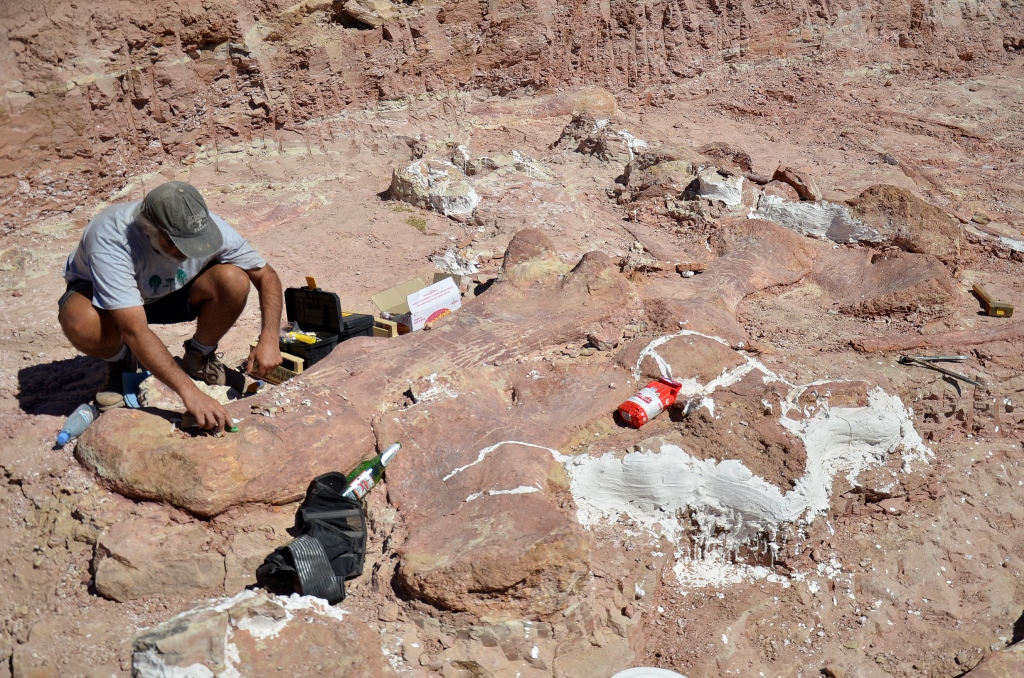 Seven of the massive dinosaurs were found in the same spot in Argentina's Patagonia region. (Museum of Paleontology / Egidio Feruglio)

If initial estimates hold up, this latest find will not only take the title of largest dinosaur ever — it will be the biggest animal ever known to have walked the earth. But it doesn't have a name yet. Researchers tell BBC News that "it will be named describing its magnificence and in honor to both the region and the farm owners who alerted us about the discovery."

Another discovery at a different site in Argentina this week proved that a much smaller member of the sarupod family, a group known as the diplodocids, lived not just in North America, but also in South America. Numerous media reports have conflated the two finds, but this second discovery is of a herbivore just 30 feet (9 meters) in length.

Nevertheless, there may be much more to find at the site in Chubut province. Dr. Carballido says that they are "still working on this extraordinary site." He adds: "We estimate that one-fifth of excavation process [is complete], so there is still much work to do and probably much to discover."

Photographs and video of the dig site are available at BBC News.