Share All sharing options for: Chip implant no bigger than a grain of rice is powered by wireless breakthrough

A new method for wirelessly powering medical electronics like pacemakers and nerve stimulators could mean new possibilities for treating illnesses and mitigating pain. As reported in the Proceedings of the National Academy of Sciences, a team led by Stanford electrical engineer Ada Poon constructed an electronic device smaller than a grain of rice that can be recharged wirelessly by a power source the size of a credit card. According to the paper published today, Poon's breakthrough discovery in wireless power requires roughly as much energy as a cell phone and exposes subjects to radiation levels well below the threshold for human safety.

an electronic device smaller than a grain of rice

The method pioneered by Poon is called mid-field wireless transfer. It works on the idea that electromagnetic waves travel differently depending on the kind of material they encounter. Poon used her discovery to engineer a power source that generates a special type of near-field wave like the kind used to power hearing implants. The wave changes characteristics when it moves from air to skin – similar to how sound waves travel faster and at greater distances though train tracks than through air, allowing the vibration of the wheels to be heard before the train itself. As a result, Poon's power source can circumvent the normal range limitations of near-field waves and penetrate deeper into the body. 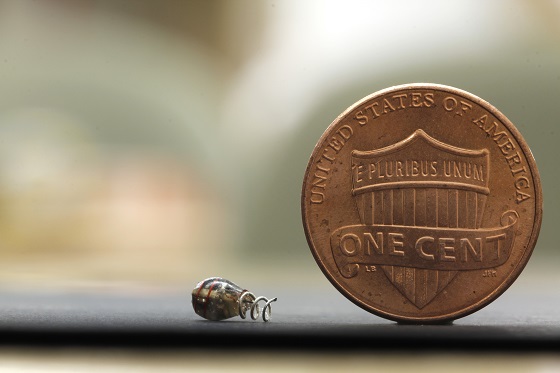 Poon believes that her work could lead to programmable microimplants like sensors that monitor vital functions, electrostimulators that alter neural signals in the brain, and drug delivery systems that apply medicine directly where needed. All without the bulk of batteries and recharging systems required today. Her endeavours could also help expedite the development of medical treatments that utilize electronics instead of drugs. Stanford Neurosciences Institute director William Newsome said that "the Poon lab has solved a significant piece of the puzzle for safely powering implantable microdevices." So far, the wireless charging system has been tested in a pig and also used to power a pacemaker in a rabbit. The next step is human trials. Should those prove successful, it will likely take a few years before the system is authorized for commercial usage.