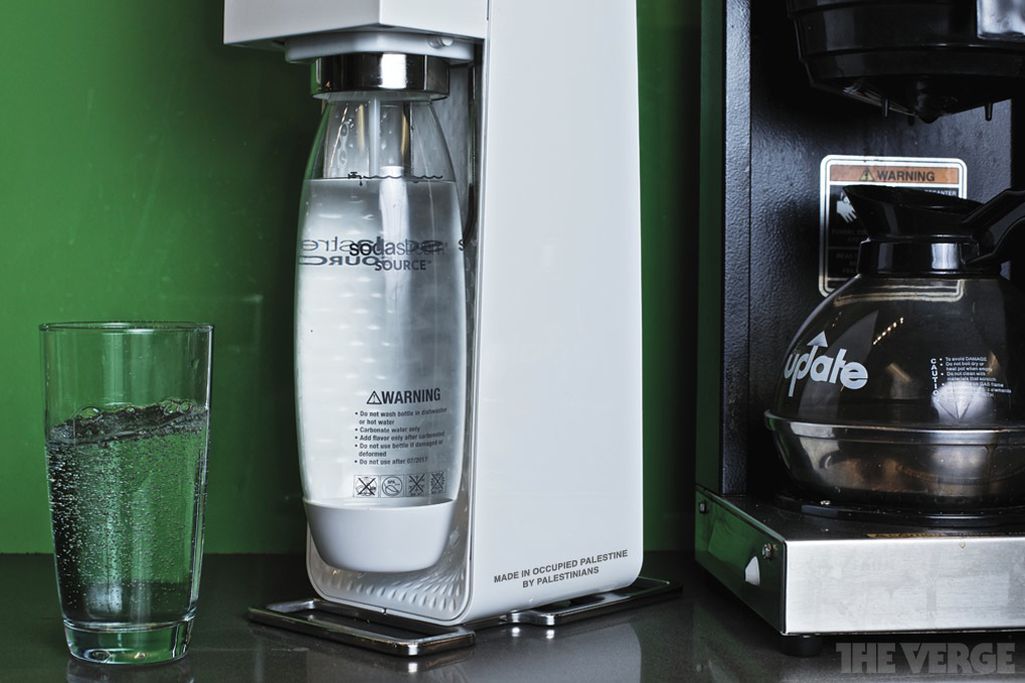 In March of 2012, members of the Park Slope Food Co-op in Brooklyn voted against boycotting Israeli goods. The vote had been precipitated by the Boycott, Divestment, and Sanctions, or BDS, movement, which seeks to use economic and political pressure to force Israel to withdraw from the West Bank. It was mostly symbolic: there were only a handful of Israeli products sold at the co-op, including tapenade, organic paprika, kosher marshmallows, and a sleek, home-carbonation machine called SodaStream.

At the time, SodaStream was not a household name. Then in January the company, which is headquartered near Tel Aviv and has a factory in the West Bank settlement of Ma’ale Adumim, 10 minutes by car from Jerusalem, was catapulted into the national news after Fox canceled a SodaStream ad planned for the Super Bowl. Allegedly, the ad was killed because it included a jab at two of the game’s sponsors, Coke and Pepsi. But the flare-up quickly turned political, and in a matter of days, if not hours, it had become a proxy battle pitting Israel’s most hostile critics against its most impassioned defenders. SodaStream was no longer about homemade seltzer. It was about the Israeli occupation of the West Bank, the plight of the Palestinians, and even the right of the Jewish state to exist at all.

After Scarlett Johansson appeared in an ad for SodaStream, controversy over the company’s factory in occupied territory in the West Bank escalated. Though the Israeli company employs a large number of Palestinians, many believe they should not operate in the West Bank. Journalist Peter Savodnik and his Stateless Media filmmakers traveled to the SodaStream factory for an inside look.

All the hubbub obscured an important fact: SodaStream is hardly the only business with a hearty business in occupied territory. The 500 Palestinian employees at the 220,000-square-foot Ma’ale Adumim plant, which includes three manufacturing buildings and four warehouses, are a fraction of the 20,000 Palestinians working at Israeli firms in Area C. (The West Bank is divided into three zones, or areas. Area C, unlike Areas A and B, is under full Israeli control and encompasses 61 percent of the West Bank’s land mass. It is home to about 300,000 Palestinians, according to the UN Office for the Coordination of Humanitarian Affairs.) Other Palestinians at Israeli companies in Area C make things like circuit boards, ceramic pipes, plastic bags, exfoliators, and fake lawns. In the Mishor Adumim Industrial Park, where the SodaStream factory is located, there are roughly 300 factories, most of which are owned by Israelis. On top of all this are the Palestinian firms hired by outside companies and scattered across the West Bank. Intel and Cisco employ Palestinian programmers. Fanzilla, which helps clients up their Facebook fan base, has Palestinian software developers. All of these outfits — those with a presence in Area C and those that just outsource to the wider West Bank labor market — benefit from the depressed wages made possible by, among other things, Israeli occupation. 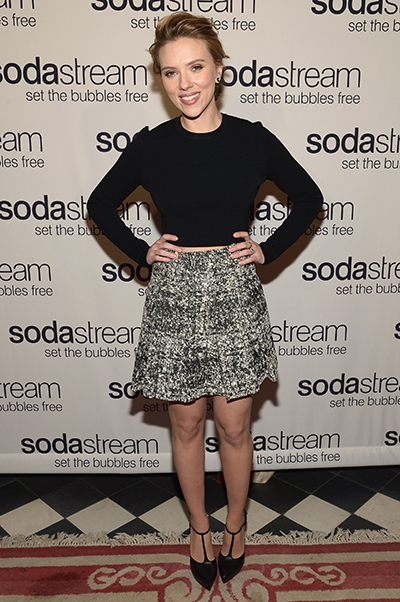 The reason that SodaStream was singled out is not a mystery: its global ambassador — who also starred in its Super Bowl commercial — is Scarlett Johansson. She made for a ripe target. In the Super Bowl ad — which SodaStream ultimately edited so it could be broadcast during the game and then posted, unedited, on its YouTube channel — the actress says SodaStream spells "less sugar, less bottles." Then she quips, "If only I could make this message go viral," shedding a white lab coat and appearing in a revealing, black skirt. Pro-BDS groups like Code Pink, The US Campaign to End the Israeli Occupation, and The Electronic Intifada have done their part to spread the word but in a way that Johansson probably did not anticipate.

Jodie Evans, a Code Pink co-founder, said the BDS movement targets companies with a big customer base. "You need to find a product that is sold on the shelves," said Evans, in San Francisco. "SodaStream has a vulnerable name." A senior SodaStream official, who asked not to be named, agreed. "We are the most visible exporter out of the West Bank," the official said. "Our products are proudly available on shelves in over 70,000 stores worldwide." Also, SodaStream makes something people can probably live without, and its market — which skews urban, upscale, and environmentally conscious — is more receptive to the BDS message. If it weren’t, there wouldn’t have been a conflict about the conflict at the Park Slope Food Co-op.

But it was the Super Bowl spot, produced by the Chattanooga-based Humanaut ad agency that transformed SodaStream from a niche cause into a global debate. Paul Gladstone, the director of operations at 3 Door Digital, a marketing firm in Tel Aviv, said Johansson lent the story sex appeal. "This was a huge opportunity for [the BDS camp] to obtain media attention and gain popularity, and they took advantage of it from every possible angle," he said. Many of the assembly-line workers at the SodaStream plant were unaware there was any controversy until they started reading a local newspaper article with Johansson’s photograph — which, they say, was what caught their attention in the first place. 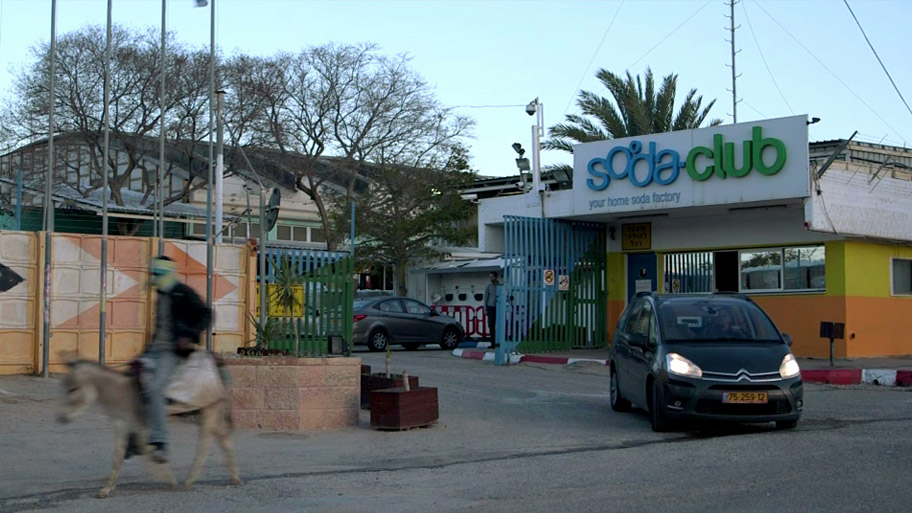 Despite the hubbub surrounding SodaStream, the West Bank is poised to expand business ties with Israel. (Paul Rivlin, an economist at Tel Aviv University, noted that the Israeli government does not publicize data about Israeli companies operating in the territories for fear of stoking more criticism, making it more difficult to gauge trends.) From 2013 to 2014, the West Bank inched up from the 145th best country to do business in to the 138th (out of 189), according to the World Bank’s report, "Doing Business 2014." During the same period, the report states, the West Bank jumped from the 182nd best economy in which to start a business to the 143rd. On top of this, the area has a growing cadre of Palestinian entrepreneurs. Ambar Renova, the program manager at Leaders Organization, a nonprofit accelerator in Ramallah, said the NGO is backing four startups. It also rents office space to eight other companies at eZone, the first "tech park" in the Palestinian territories.

The Palestinian Authority has done little to boost growth. It is deeply corrupt; in December, the European Court of Auditors reported that the PA had been using European funds to pay Gaza workers who had not worked for seven years, prompting the EU to rethink its aid policy. Palestinian officials also oppose Israeli investment in the West Bank, said Arye Hillman, an economist at Bar-Ilan University who has studied labor markets in Israel and the West Bank.

Hillman remembered that during the second intifada, in late 2000, the number of suicide bombings in Israel skyrocketed. The Israeli government responded by building a barrier (which is mostly a fence) separating Israel and the West Bank. Hillman said that, before the barrier, Israelis and Palestinians more or less inhabited one big labor market. "What SodaStream does is it gives its employees an opportunity to work in a unified labor market again," he said. (Critics say that SodaStream, like other Israeli companies in the West Bank, pays Palestinians less than Israelis and that Palestinian workers’ rights are not protected. Palestinian workers at the Ma’ale Adumim factory said their monthly salary — about 5,500 Israeli shekels (or $1,582) — is two to three times greater than it would be at an average job in the West Bank.) "The barrier is good for Palestinian elites," Hillman continued, "because it gives the Palestinian elites access to cheap labor. It trapped them on their side of the barrier. What places like SodaStream have done is given them access to high-income jobs." In other words, so long as the two labor markets are kept segregated, the Palestinian authority (the leading employer in the west bank) can pay comparatively low wages. If the two markets were recombined, the PA would have to compete for labor with Israeli companies, which are operating in a much richer economy and therefore pay much higher wages. (Critics of the Israeli occupation say Israeli businesses in the West Bank like SodaStream benefit from the barrier, too. But Israeli economists have pointed out that, on balance, Israeli business would be better off with a single labor market — which, while driving up wages in the West Bank, would drive them down in Israel.)

The Palestinian Authority may eventually change its tack. In 2013, the West Bank’s unemployment rate was just over 22 percent. There are not enough new businesses to create the hundreds of thousands of jobs that are needed to reduce that figure. The bottom line is that taking a principled stand against SodaStream is not only arbitrary and probably pointless — it also ignores the plight of the Palestinians who work there. Rivlin, the economist, said that he opposes the settlements but that it would be a bad idea for SodaStream, or any other Israeli firm in the West Bank, to pull out right now. This neatly reflects the tension at the heart of the factory’s very existence — the unavoidable sense that things are not as they should be, and the equally powerful sense that there are no viable alternatives.

Nadim Hamed, one of the cinematographers who worked with The Verge to film the documentary short The Factory, described the Palestinians at the SodaStream facility at Ma’ale Adumim as "desperate, simply desperate." This desperation courses through the whole plant, the daily rhythms of the assembly line, the workers’ commutes and conversations, their smoke breaks and lunch breaks, the ways in which they talk to and look at each other. It is a feeling of being trapped, a feeling that they are lucky to work at SodaStream and angry and mystified that their job is in an Israeli settlement in the West Bank. "Survival overpowers pride," Hamed said. "They have that feeling of being taken advantage of, but they would rather eat their pride than starve." Evans, from Code Pink, sounded surprised that Palestinians at the SodaStream plant feel conflicted about working there. "You have to start to shift the lever in the other direction," she said. After forcing SodaStream to leave the West Bank, she continued, "We would work to create jobs, find jobs. You have to start moving the needle." Evans added that supporters of the BDS movement outside Israel take their cue from activists in Israel and the West Bank. "We don’t go in there and decide what to do," she said. "They asked us to join the BDS movement."