The world has seen an "unprecedented" surge in the production of new synthetic drugs, according to a report released today by the United Nations Office on Drugs and Crime (UNODC). In its latest Global Synthetic Drugs Assessment, the agency says it identified 348 new synthetic drugs in 94 countries as of last year, with the majority emerging between 2008 and 2013. The UNODC received reports on 97 new synthetic drugs in 2013 alone, though it acknowledges that the true number of substances on the market could be much higher.

The agency defines new psychoactive substances as drugs that are not controlled under international conventions, but may pose public health risks. Synthetic cannabinoids — drugs designed to mimic the psychoactive effects of cannabis — comprised the majority (28 percent) of such substances reported to the UNODC between 2008 and 2013, followed by synthetic cathinones, including bath salts, at 25 percent.

Global seizures of methamphetamine, meanwhile, reached record levels last year as production and criminal activity continue to rise across Asia. Methamphetamine seizures in the region tripled between 2008 and 2012, rising from 12 tons to 36 tons, with China accounting for nearly 45 percent of the total. UNODC officials attribute much of this growth to an ongoing shift in both demand and production to Asia, resulting in new global trafficking patterns. 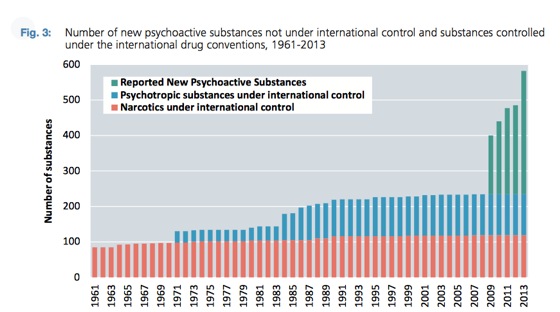 The US has seen a steady rise in methamphetamine seizures since 2010, though larger increases have recently been seen in Mexico, which accounted for around 60 percent of all North American seizures in 2012. Ecstasy seizures, by contrast, have sharply declined across the continent — dropping by nearly 85 percent in the US from 2007 to 2012 — though North America remains one of the largest markets for new synthetic drugs. Reports of new substances nearly quadrupled in Canada and the US between 2010 and 2013, with synthetic cannabinoids commanding an increasing share, reaching 31 percent in 2013.

Today's report comes after a group of leading economists called for an end to the global war on drugs earlier this month, urging governments to prioritize public health and human rights over criminal prosecution. In a report released by the London School of Economics (LSE), the economists called for the UN to implement some of these changes at its 2016 General Assembly Special Session on Drugs, warning against a "one size fits all" approach to drug policy.

"The United Nations is pursuing peaceful solutions to the world drug problem founded on a balanced approach between demand and supply that embraces human rights, scientific evidence and the overriding principle of protecting people’s health," a UNODC spokesperson said in an email statement on the LSE study earlier this month. "Such efforts are entirely in line with the International Drug Control Conventions, which were created to protect the health and welfare of people."