The resolution is high, the battery life is not

I feel spoiled. Ever since I started playing games on the new Razer Blade gaming laptop, I've had a tough time enjoying them practically anywhere else. My TV and my desktop PC only display games at 1080p, but the Blade's 14-inch, 3200 x 1800 screen is practically like looking through a window.

With the stylings of a midnight-black MacBook and powerful components you’d normally only find in a much thicker, uglier gaming machine, the 14-inch Razer Blade was the rare portable computer that lets you play games without looking like a geek. Now, it can also let you play them with incredible fidelity.

But as addicted as I am to the high-def experience, I don’t know if I’d pay upwards of $2,199 for Razer’s latest PC. Last year, its $1,799 predecessor struck an incredible balance between work and play — one that sadly hasn’t been replicated here. 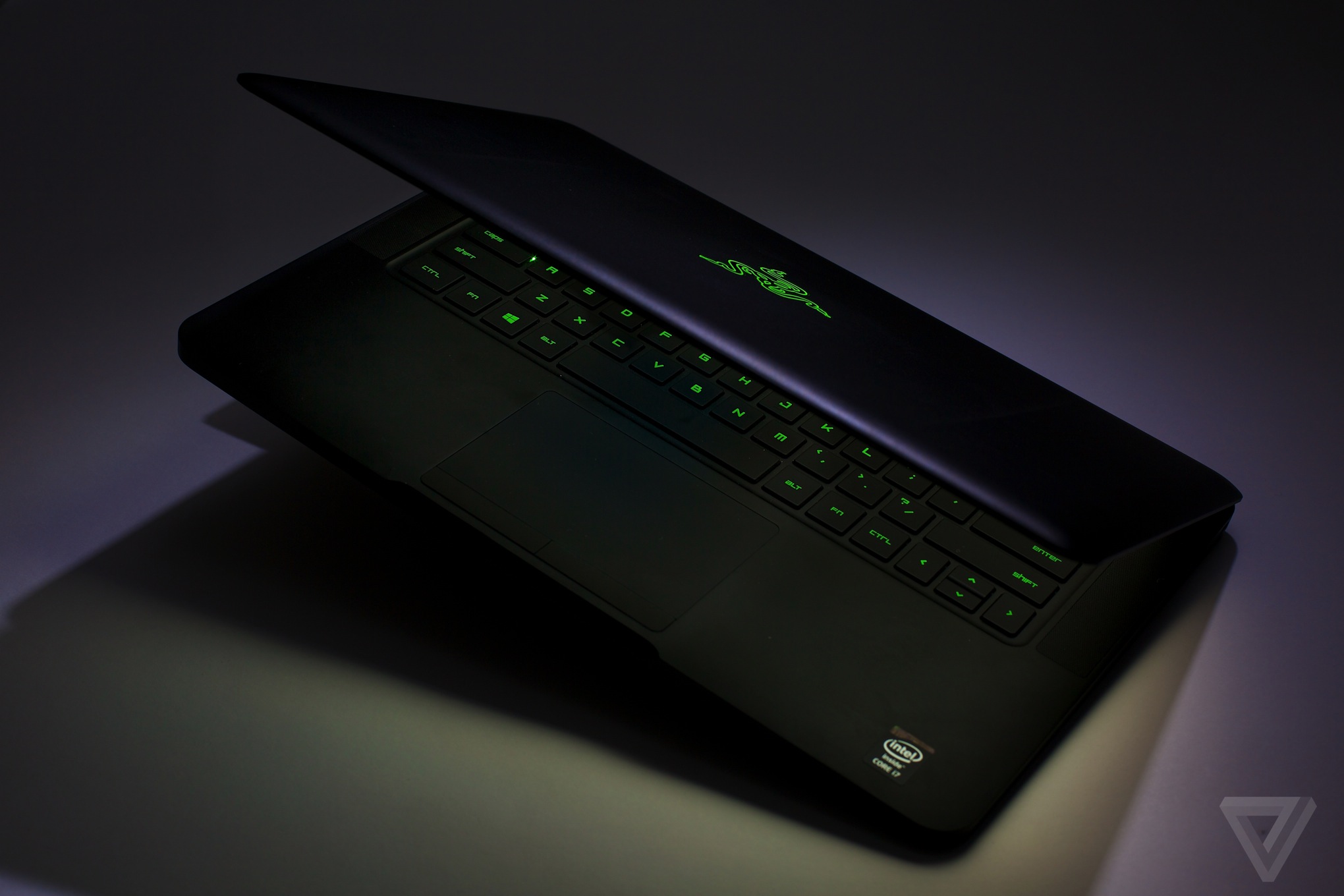 From the outside, the 2014 Razer Blade looks practically identical to last year's model. That’s a good thing: it means it has the same fantastic build quality, with a matte-black aluminum unibody frame that manages to be subtle, refined, and delightfully ostentatious all at the same time. From a distance the Blade might simply look like a black MacBook Pro, but the laptop has a distinct vibe up-close, with laser-green light shooting out of its crisply cut keys and ridges on the lid that evoke a cobra ready to strike. It’s also a rather minimalist machine, particularly when it comes to ports: you’ll find three blazing-fast USB 3.0 sockets, headset and HDMI jacks, but still no Ethernet or SD card slot despite our wishes the last time around. 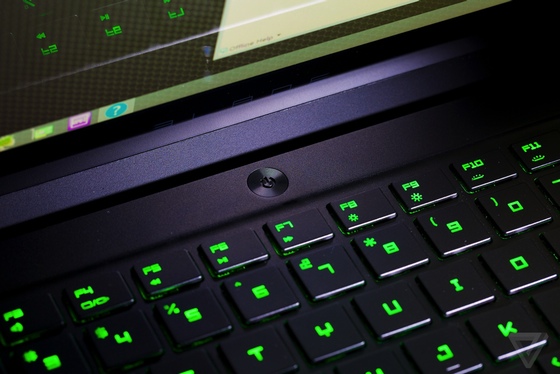 Open up that familiar lid, and you’ll find the Blade’s gorgeous new display. The screen isn't quite as crisp as a Retina MacBook Pro and loses a bit of brightness if you look at it from an off-angle, but the pixel-dense 3200 x 1800 panel is still pretty great. It's a high-quality touchscreen now, too, primed for the Windows 8.1 user interface, so you can just reach up and swipe between the apps and photos that fill the beautiful display. Incredibly, the new touchscreen makes the machine only a single millimeter thicker. It’s still slightly slimmer than the MacBook Pro with Retina display. Also, Razer rebalanced the laptop's hinge to compensate for the weight. You can lift the lid with a single finger when it's lying flat on a surface, something I can't say for my MacBook Air.

The truly incredible thing about the Blade, though, is that Razer stuffed enough horsepower into the tiny laptop to actually play games at that full 3200 x 1800 resolution. Not the most demanding, resource-intensive games that the PC platform has to offer, mind you: you won't be running Crysis 3 at native resolution, nor The Witcher 2, but most normal games look and play amazing on the system and you can run many of them at the near-4K resolution. For instance, the 2.2GHz Intel Core i7-4702HQ processor and Nvidia GeForce GTX 870M graphics in the Blade let me play Tomb Raider, Max Payne 3, and Battlefield 4 at 3200 x 1800 and medium detail. The results are incredible.

Out of all the visual upgrades that PCs have ever offered my games, the resolution bump to 3200 x 1800 is my favorite by a country mile. There's nothing quite like seeing the texture in the rocks, the trees, the weaponry, the clothing that characters wear. It made me want to play these games all over again, like the first time I rediscovered my favorite music through a set of audiophile headphones. Everything looks more lifelike at 3200 x 1800 resolution, particularly because the high pixel density smooths out the jagged edges common to demanding 3D games. And with less-demanding games like Borderlands 2 and Mirror's Edge, you can turn practically all the settings up for a truly incredible experience. 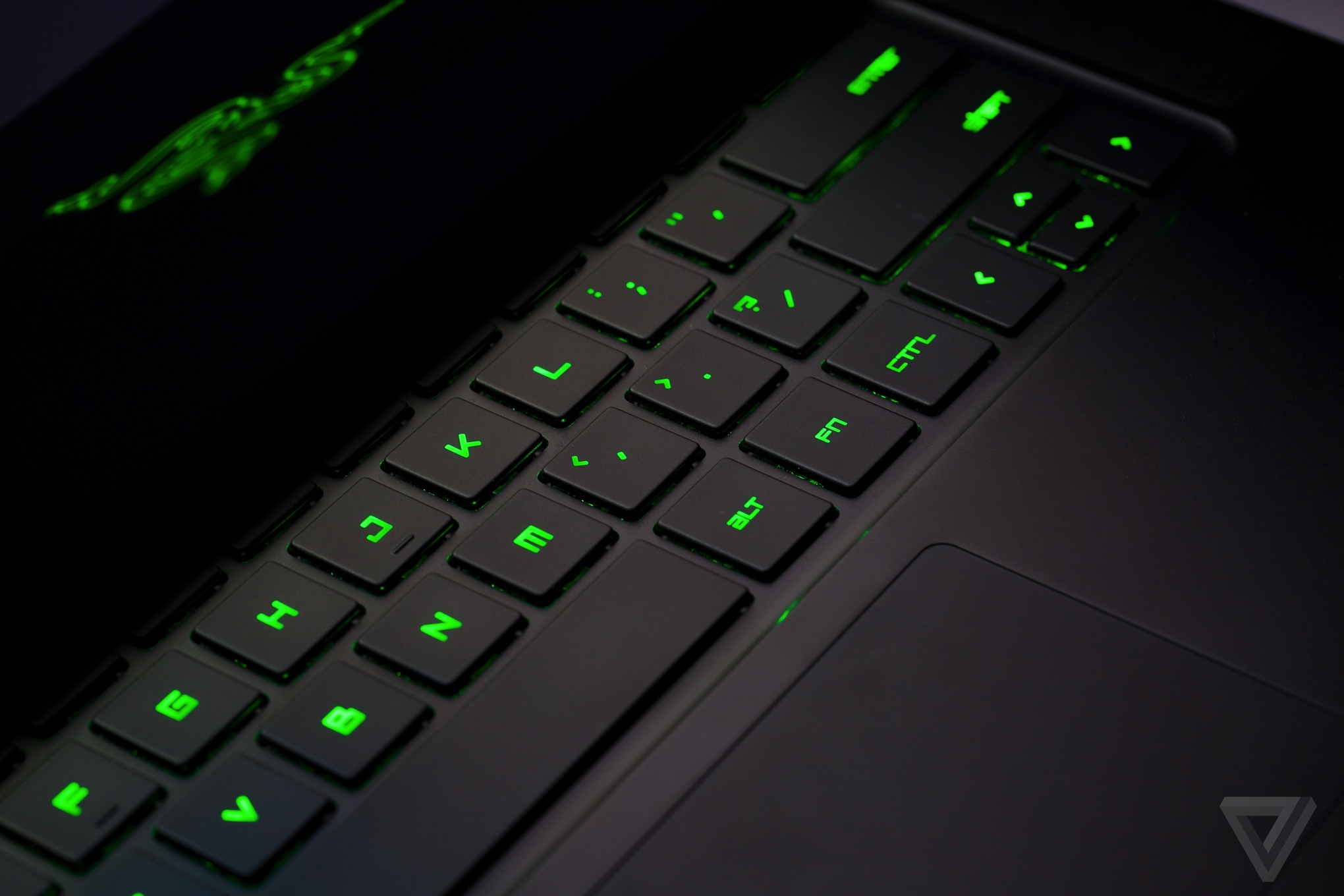 But before you run out and buy a new Blade, let's talk about the elephant in the room: not everything plays nicely with that 3200 x 1800 resolution. Older games like Portal 2 weren't designed for screens this crisp, and their artwork doesn't hold up under close scrutiny. It's a little bit like when HDTVs were first introduced and newscasters realized they needed to do a more careful job with their makeup. And unfortunately, some recently released games are just too demanding to run with both high resolution and the artwork that would let you appreciate them at high resolution, like BioShock Infinite. 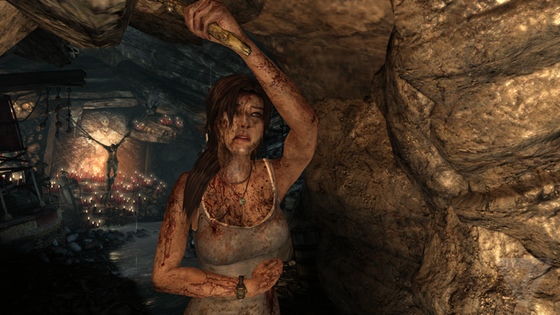 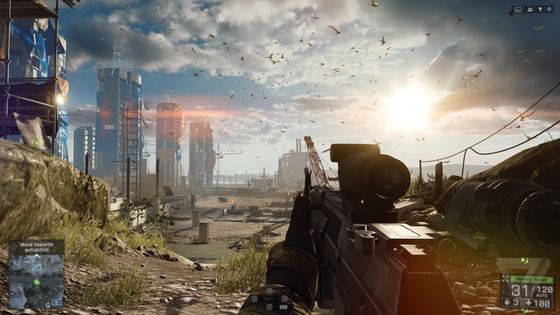 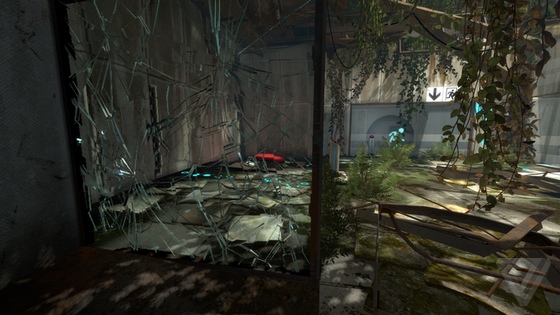 Many games require lots of tweaking to look good

That could pose a problem with future games too. While you can turn down games like BioShock and Crysis 3 to 1080p and use the laptop's extra headroom to crank up the level of detail, not all games will properly fill the screen unless you also switch your Windows desktop resolution to 1080p. That’s a bug: Razer says a fix is underway. And because 1080p isn't the screen's native resolution, you'll need to spend some of that graphical muscle on anti-aliasing to get rid of jagged edges you wouldn't normally see.

And like last year's Blade, the laptop gets seriously hot if you crank all the settings up. There's a new cooling system that directs the heat away from the all-important WASD keys, but I still had extremely sweaty palms after a single hour of gaming due to the way the anodized aluminum frame conducts heat.

Hardcore PC gamers will anticipate and negotiate these issues, but not everyone wants to spend their time tweaking things to look and feel right. And even if you’re not gaming, you’ll run into issues with Windows applications that look blurry or unreadably tiny. Internet Explorer looks great, but Google Chrome is a bit of mess. High-res photos and videos look fantastic, but the interfaces to actually flip through them may be ugly or unusable if software companies haven’t updated them to support high-density screens. There doesn’t seem to be any shortage of new high-res laptops and tablets coming out, though, so hopefully that problem will eventually go away.

What won’t get better is the new Blade’s sub-par battery life. While last year's model lasted 6 hours and 49 minutes on our Verge Battery Test, the 2014 edition was a full two hours shy at 4 hours, 48 minutes in all. When I integrated the Blade into my actual workday, writing stories and answering emails with a little music in the background, I barely made it through four hours on a charge. Though Razer's custom power adapter remains delightfully portable, you’re still just as screwed if you leave it at home before hopping on the train to work.

It’s a shame, too, because otherwise this is the best laptop that Razer’s ever built. The keyboard feels more responsive somehow, even if it’s a tad stiff to start, and the trackpad’s two dedicated buttons are clickier and more comfortable to press compared to their shallow predecessors. Though pinch-to-zoom detection on the trackpad is still a bit overzealous, it’s smooth and glassy when simply flinging the cursor around, closer than ever to the high bar set by Apple’s MacBook Air. Even the speakers provide a surprisingly clear, crisp, and wide audio field thanks to freshly tuned Dolby software. 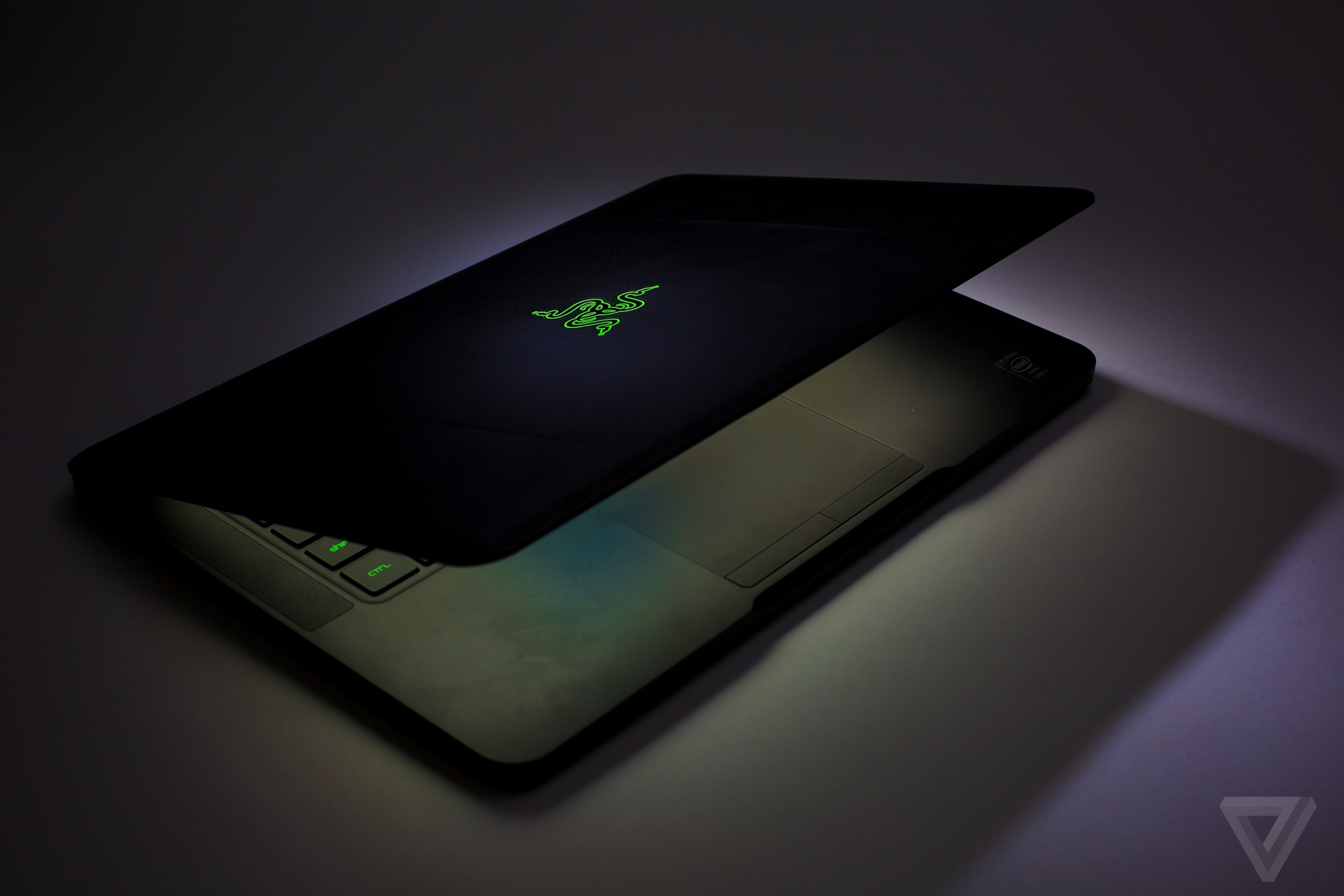 Starting at $2,199 for a model with 128GB of solid state storage, or a $2,399 for a more reasonable 256GB of space, the new Razer Blade costs $400 more than its predecessor, sacrifices two hours of battery life, and requires an owner willing to tweak. In exchange, you get some of the most powerful silicon ever crammed into a laptop, and a super high definition display. In other words, you may not look like a geek carrying around the new Blade, but you might have to be one to appreciate it. While I could recommend last year’s model to practically anyone with enough money to spend on a capable new laptop, only self-selecting gamers need apply for this new machine.

Still, the rest of us probably won’t have long to wait: Nvidia’s new power-saving Maxwell chips for powerful gaming laptops are right around the bend, and it’s only a matter of time before they appear in the new Blade. If I know Razer, the company will stop at nothing to produce the perfect gaming laptop. It has a damn fine one right now. We’re just not quite there yet.