How does Microsoft's Surface Pro 3 stack up to Apple and the rest of the competition?

Share All sharing options for: How does Microsoft's Surface Pro 3 stack up to Apple and the rest of the competition?

Microsoft unveiled the Surface Pro 3 today, and now more than ever before, the company is pushing the message that this is a product capable of replacing your trusted and proven laptop. In his usual style, Surface chief Panos Panay boldly proclaimed that the Surface Pro 3 will remove the conflict of choosing between a tablet and laptop — that it's been designed without compromise with the best aspects of both.

"I am sure that this is the tablet that can replace the laptop," Panay said. Those are big words indeed. Aside from Apple's MacBook Air, which Panay mentioned repeatedly on stage, Microsoft is finally facing improved (and genuinely impressive) competition from Windows machine manufacturers like Lenovo too. The Surface Pro 3 has clearly been designed to be more productive than an iPad Air, but can it really unseat leading laptops like Apple's MacBook Air and Lenovo's Yoga 2 Pro?

A far more sensible screen ratioBy far the most immediate and noticeable change in this year's Surface Pro is the display. At 12 inches, it's now larger than previous models and also features a much higher 2160 x 1440 resolution. That puts it near 216ppi, which doesn't quite match the iPad Air's 264ppi pixel density, but again, you're working with a larger surface here — no pun intended. Microsoft has also finally done away with the unwieldy 16:9 screen ratio of other Surface tablets in favor of a taller 3:2 ratio, making the latest device easier to hold and a better fit for a lot of content.

But this is a perfect example of where Microsoft faces stiff competition from Windows hardware vendors. The Yoga 2 Pro features a stunning 3200 x 1800 display, so the Surface Pro 3 can't claim to be best in class out of the gate. It certainly has a more impressive resolution than the MacBook Air though, and it's a significant step up from Surface Pro 2. So while it may not be the best, those two points may be good enough for Panay and his team.

Microsoft says that cramming a proper Core processor, from an i3 up to an i7, into a design so thin called for 100 custom parts and precise engineering. That hard work should put Surface Pro 3 a level above last year's model and on par with the best Windows Ultrabooks out there, though you'll need to wait some time for the most powerful models. Core i7 configurations aren't slated to ship until August. 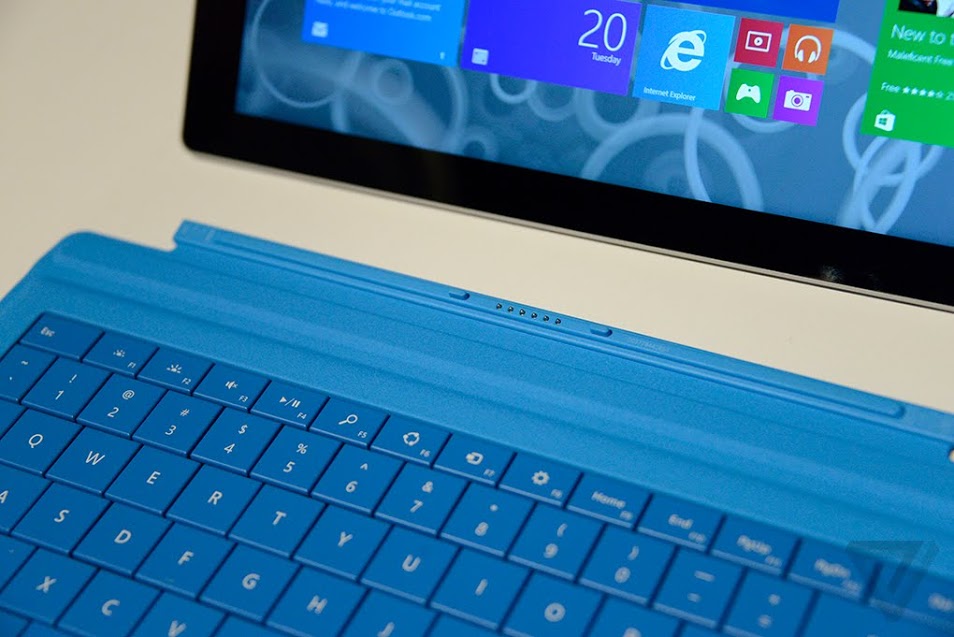 Panay also spent plenty of time today talking about the intense collaboration between Microsoft and Intel that made the getting its processors inside of the Surface Pro 3 possible. He described the new tablet as "the thinnest Intel Core product ever made," and it's certainly thin. At just 0.36-inches thick (not including a keyboard cover), it's only subtly thicker than the 0.29-inch thick iPad Air. That's not necessarily a fair comparison though, as the Surface — wider and taller as it may be — has the hardware of a full laptop on the inside. Compared to top laptops, it's far thinner: nearly half the thickness of the MacBook Air (0.68-inches at its thickest) and the Yoga 2 Pro (0.61-inches at its thickest).

It's also a lot lighter — something Microsoft was happy to boast. The Surface Pro 3 weighs 1.76 pounds, which, once again, is heavy for a tablet but light if you really see this as a laptop replacement. Its laptop competitors, the Air and Yoga, weigh 2.96 pounds and 3.06 pounds, respectively, for their 13-inch models. If you do see it as a tablet though, Apple's iPad Air is still the winner on portability.

Sure, a kickstand and a stylus aren't new for the Surface. But this time, they're actually pretty different. While the iPad Air is distinctly a tablet and the Yoga 2 Pro and MacBook Air are distinctly laptops, Microsoft is hoping that features like the Surface Pro 3's kickstand and stylus can make a real argument for why it's the device that can properly bridge the gap. This time, its kickstand is able to stop and support the tablet firmly throughout its range of motion, making it easy to use as you might a laptop or a tablet. And the stylus — which Microsoft wants to be as natural as a real pen — is now able to produce some of the best on-screen writing we've seen.

That all makes us more than intrigued by what Microsoft has been able to do with the Surface Pro 3. In terms of specs and size, it really does appear to fall between a laptop and a tablet, taking some of the best from each but not obviously beating out either one. Whether that middle ground can become your computing method of choice will really come down to what you think of Microsoft's vision for everyday use. Flagship features like the Surface's kickstand and stylus are finally approaching a level of quality where those who aren't sold on Microsoft's vision should at least be willing to entertain them. The real question is: is it now compelling enough for people to buy in?

Surface Pro 3: all the news from Microsoft's third try at tablets