Can the Surface Pro 3 steal the MacBook Air’s crown?

Can the Surface Pro 3 steal the MacBook Air’s crown?

Microsoft is hoping that the bigger they are, the harder they fall

"I am sure, Satya. I am sure that is the tablet that can replace the laptop."

Microsoft corporate vice president Panos Panay ended his marathon unveiling of the Surface Pro 3 by addressing his CEO, Satya Nadella. It seemed as if he was simultaneously pointing out that Nadella had helped create this vision and asking Nadella to have faith in the plan. Panay certainly wants to convince the rest of us to have faith — he had spent the last hour on the stage, extolling the virtues of the new tablet in a strident tone.

Before him, a sea of technology journalists (myself included) were reporting his words in real time — the large majority of them using MacBook Airs to do it. Panay had also just finished quoting the Macbook Air review Joanna Stern recently wrote in the Wall Street Journal at length. So you can’t blame him for feeling like he needed to make a strong case for the Surface’s computing prowess. And for doing it in a way that often felt more like a cross-examination than an exuberant technology demo. He paused, he looked to the crowd, and he repeated: 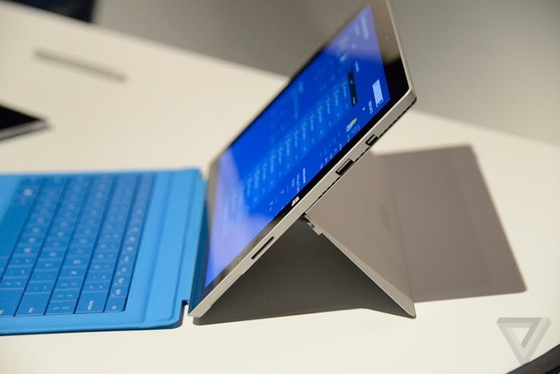 The Surface was always a strange product The Surface was always a strange product. It sits in the middle ground between a tablet and a laptop, mixing standard PC parts with a touchscreen form factor. People compared it to the iPad and wondered if it would ever gain the app support it needed, if its odd size would really work, if the confusion between the Pro and the RT versions would hurt adoption. But yesterday, Microsoft had little to say about the iPad and a lot to say about laptops. The tagline for the Surface Pro 3 is that it’s "the tablet that can replace your laptop," and the laptop Microsoft has in mind is the MacBook Air.

When it was first pulled out of a paper envelope in 2008, the original MacBook Air felt like a product from the future. The first few versions turned out to be a little too delicate and slow, but beginning in 2010 the machine really began to hit its stride. Its nearly perfect combination of battery life, speed, durability, and thinness made it the de-facto workhorse for those aforementioned tech journalists and millions of other consumers. It became the default idea for a futuristic, powerful laptop. And that’s precisely why Microsoft is dead set on unseating it, if only as a symbol of innovation.

Replacing the laptop means solving many of the same problems a laptop does, and the biggest one on Microsoft’s list was "lapability." That’s the company’s own term and while Panay admits he’s been "super judged" for using such a funny-sounding word, he’s not apologizing for it. The Surface’s lapability has been seriously upgraded, mostly because of the clever way the Type Cover adds a second magnetic latch for more stability. The Type Cover feels little more like a traditional keyboard too, and the enlarged and improved trackpad also helps. The new, friction-based hinge also means that there’s more flexibility in the angle you use for the screen. Both go a very long way towards reducing the Surface’s compromises.

Even with these design improvements, the Surface’s core design is simply physically more complicated than a laptop’s single hinge. You will find yourself mucking about with setting the kickstand in the right place on your knees and dealing with that cover flapping about. Microsoft may have needed two years of design iterations before it could honestly make the case that the Surface can be used on your lap like a, well, a laptop, but it’s finally gotten close enough to make it. It’s just strange to think of so much design effort going into what other companies solve with a hinge. The simplicity of a clamshell is easier, but it’s also not the end-all-be-all of "getting stuff done" computing. If you buy into the benefits of a tablet computer — and there are many — the tradeoff could well be worth it.

Setting aside "lapability" (and let us never use that word again), there are other signs that Microsoft means it when it says it wants to replace your laptop. The new screen size, 12 inches diagonally in a 3:2 aspect ratio, is another hint that Microsoft is much more interested in regaining lost ground in the laptop market than it is in trying to conquer the iPad. It’s a very big tablet, and it’s not something you’re going to snuggle up and read with. This is a tablet that looks, feels, and acts very much like a laptop.

It’s not something you’re going to snuggle up and read withMicrosoft is more than happy to talk about specs. It will tell you how the screen is only an inch or so smaller yet, because of its higher resolution, shows "6 percent more content than [the MacBook Air’s] 13-inch screen." How it’s thinner. How it has a different kind of fan that’s quieter and less obtrusive. How integrating Intel’s processor required 100 custom parts. How the upcoming version of Photoshop will work with the touchscreen. How computing with a pen can feel more direct and natural.

There was a set of scales sitting at stage right at the very beginning of the event. The message was clear: two things were about to be judged. Indeed, halfway through the event Panay set down the Surface and a 13-inch MacBook Air on the scale. The Macbook, which weighs about a pound more than a keyboard-less Surface, predictably tilted the scales downward. The Surface Pro 3 remained perched on the scale for the duration of the keynote.

That, more than anything else, is Microsoft’s message for the Surface Pro 3. It’s not trying to dethrone the iPad and it’s not even trying to mess with Microsoft’s OEM partners. It’s taking on the MacBook Air. If you’re going to try to take market share away from laptops, you may as well start with the one that has been gaining market share for the past eight years.

More from this stream Surface Pro 3: all the news from Microsoft's third try at tablets