This is the smartphone that makes all others look stupidly expensive

The first cellphone I ever owned was the cute and compact Nokia 6510. My heart was actually set on the more expensive and slider-protected 8850, but a teenager’s budget could only stretch so far. The funny thing is that over the course of its lifetime, the handset I got served me exactly as well as my dream phone might have done. I made calls, sent and received texts, and played Snake II a lot. Those were the uncomplicated days of feature parity (mostly because phones just didn’t have all that many features to begin with). The premium handsets distinguished themselves with design, materials, and style, not with specs and performance.

I've waited a long time to be able to say the same thing about smartphones. A cascade of technological evolutions at the start of this century set phone makers off on a breathless chase for the latest and greatest hardware spec and feature list. Bigger screens, more storage, faster processors, 3G and then 4G — the list of must-haves for a satisfying smartphone experience was growing every few months. It was all coming so quickly that by the time a desirable feature trickled down to an affordable level, it was already superseded and no longer so desirable. The bros with 5-megapixel cameras on their phones would mock the straggler with his 3-megapixel device.

The demand for high-end features at low-end prices thus produced an unhappy compromise: the cheap pseudo-smartphone. It wasn't simple, quick, and responsive like the basic phones of the past, nor did its battery last anywhere near as long. But it had Twitter and Facebook clients, dammit, and it could surf the web if you gave it five minutes to load every page. 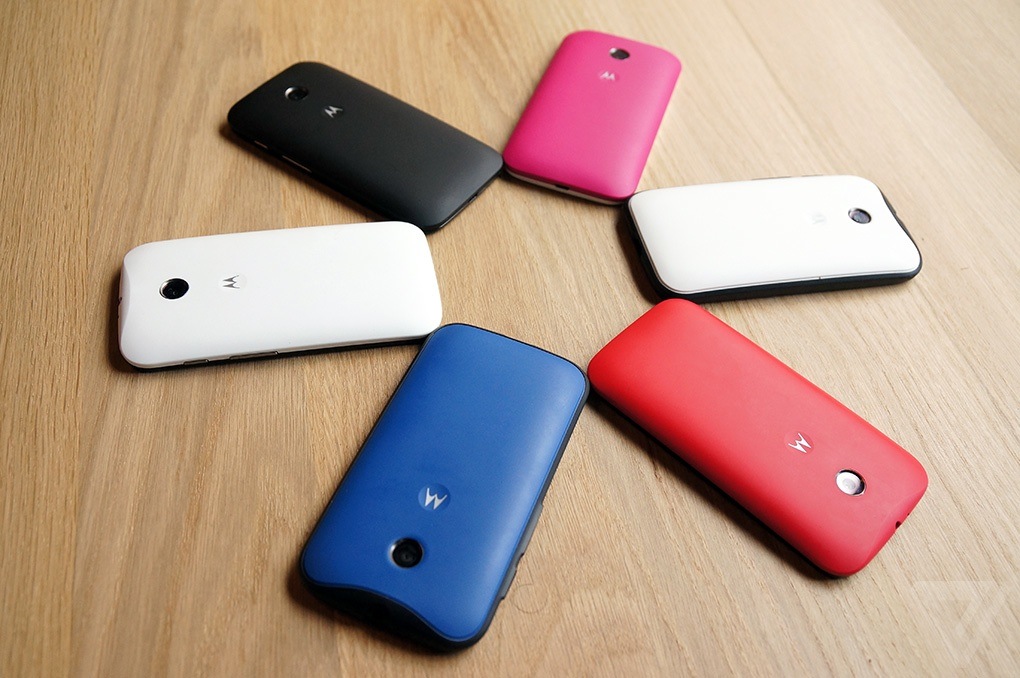 The cheapest smartphones so far have all been patronizing. Designers using $500 devices in their day-to-day lives are asked to imagine what someone with a quarter of their budget would tolerate and the product is typically a pale imitation of the thing people actually want to buy.

The Moto E is the first phone in its class where I can realistically envision its designer using it as his regular phone. And it’s the first that I could use on a daily basis too.

Motorola’s software chief Steve Horowitz told me at the Moto E launch that this phone would be "every bit as performant as much, much higher-cost devices." He wasn’t lying. I was amazed to see the quick responsiveness of the Moto E during that event and the days since have only reinforced my first impression. This is far and away the fastest and best user experience you can get in a sub-$150 phone. It’s so good, in fact, that you can switch between the Moto E and the Moto X without noticing any jarring difference. Both run the latest Android 4.4 software, and run it well. 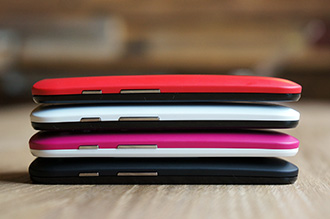 None of the basic apps and services that make Android phones worth using are a challenge for the Moto E. Navigating my way through maps or the Chrome browser, editing and deleting photos in the gallery, or simply checking Gmail, I found myself perfectly content with this phone’s performance. Having spent years reviewing the very latest and most expensive Android phones — like this year’s Xperia Z2 and HTC One — I now come to find that most of their functionality can be replicated at a fraction of the price.

Motorola already proved that a good smartphone doesn’t need to be expensive with the six-month-old Moto G. What it’s doing with the Moto E, however, is setting an entirely new benchmark. The G costs $50 more and retains a closer affinity to the typical Android smartphone spec sheet. The Moto E goes further, cuts even more, but still achieves good performance at a now entirely unmatched price. Though it’s viewed as the bare minimum today, the E’s hardware is actually very similar to HTC’s 2011 flagship Android phone, the Sensation. Both have 1.2GHz dual-core processors and 4.3-inch screens with qHD (540 x 960) resolution. The Moto E actually has a bigger battery and lasts a satisfyingly long time, which is to be expected with the more efficient processor technology of today. I can easily go a couple of days between having to recharge it. 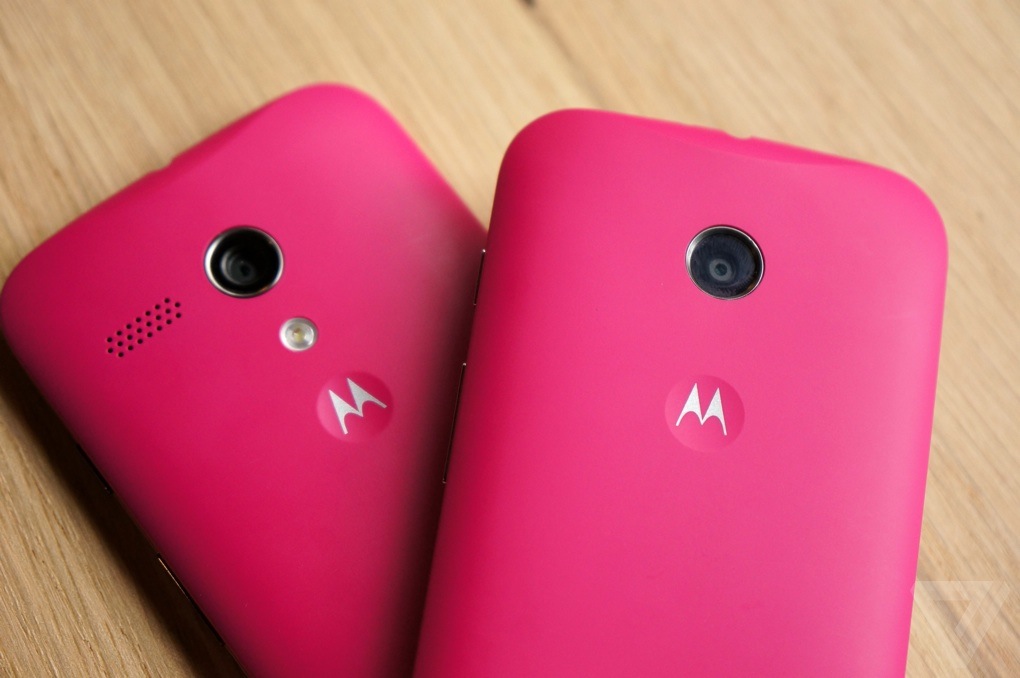 While the Moto E's pricing is aggressive, this phone is actually all about restraint. It doesn't try to do or look like anything extraordinary. Interchangeable plastic back covers provide a bit of external color and variety, an edge-to-edge Gorilla Glass screen protects the front, and a couple of buttons take care of the basic power and volume functions. Not pursuing gimmicks, either in software or hardware, has freed up enough room in Motorola’s budget to also make the E water-resistant. Retaining a consistent design language and port placement also makes the Moto E feel very much part of the same family as the G and X. 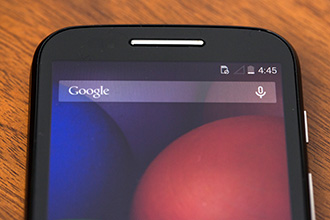 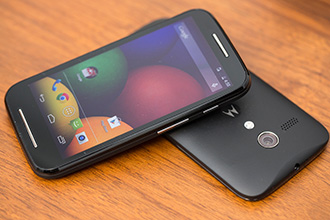 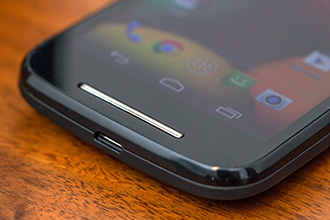 There are imperfections, but not inadequacies

With its current trifecta of handsets, Motorola has come closest to recreating the simplicity of choice that feature-phone buyers had a decade ago. Whether it’s the E, G, or X, a Moto phone will give you a consistent, up-to-date Android user experience, the assurance of a future upgrade to the next big software revision, and a simple ergonomic design.

For many, the Moto E will be unremarkable and forgettable, but for a vast number more, it’ll be revolutionary. Almost every tech company — from Nokia through Google and Firefox — has talked about "connecting the next billion." Handsets like the globally popular Lumia 520 have done a lot to bridge the technological gap between expensive and affordable devices, and now the Moto E is completing the job by adding the full Android and Google Play Store ecosystem to the mix. This is not a hand-me-down for the poor masses, it’s a modern smartphone that should embarrass only those who have had to spend more to achieve the same goals.

There are still some things that the Moto E lacks that can justify upgrading to a higher-priced model. Its camera is terrible, it cannot play back Full HD video, and there’s no LTE option. The LCD display also exhibits a subtle rainbow-like color cast when displaying pure white backgrounds. Those are all limitations I can tolerate, however.

Steve Horowitz came to Motorola from Google’s Android team and the words he speaks still sound like they’re coming from Mountain View. Motorola insists on giving users a "pure Android" experience, and indeed its software is indistinguishable from what you’ll find on Nexus devices. When Google introduced KitKat, version 4.4 of Android, its biggest revisions were to make the OS easier on system resources and thereby accessible to a wider range of devices. The Moto E is the perfect embodiment of that Google vision.

The purest expression of Google's vision of a more inclusive Android

Cutting what isn’t strictly necessary, but retaining a core of reliable performance and simple design, Motorola has set a new standard with the Moto E. No longer can phone manufacturers complacently issue hamstrung devices that only look, but don’t really act, like smartphones. Firefox OS and every other effort at building affordable smartphones will have to measure themselves against the Moto E’s comprehensive capabilities. This phone is fast and responsive, hides its compromises well, and its access to the Google Play Store plugs it into the vast and thriving Android ecosystem.
Android became the dominant mobile platform of today on the back of breakthrough high-end devices like the Samsung Galaxy S, HTC Evo 4G, and Motorola Droid. The next stage in its growth will be driven by phones like the Moto E, a handset that’s affordable to many and good enough for most.
Lead photo by Sean O'Kane.

More from this stream Google's next generation: Nexus 5, Android 4.4 KitKat, and more