Could Made For Spotify be the new Made For iPod?

Share All sharing options for: Spotify lands another hot integration, this time with mixing app Djay

Spotify isn't profitable quite yet, but with 10 million paid subscribers, the company is likely closer than anyone else in the on-demand music space to breaking even. You could attribute the company's success to a variety of things, from its extensive music collection to its fleet of apps for almost every platform, but I think another side of Spotify's business deserves a bit more credit: the increasing number of apps, gadgets, services, and even cars that plug directly into Spotify. The latest is a hard-wired integration with Djay, one of the most popular DJ-ing apps, which lets you stream two tracks from Spotify simultaneously and mix between them in real-time.

The integration gives DJs access to a library of 20 million tracks, where before, they would have only had access to their local iTunes library or to a crate of vinyls. You unfortunately can't record and share your mixes inside the app due to licensing restrictions, but you can share the sets you've created on Facebook and Twitter as Spotify playlists. The app's coolest new feature is Match, which uses data from Spotify and The Echo Nest (a recent Spotify acquisition) to cue up tracks that will mix well with the current song based on beats per minute, key, and other factors.

"There's been a clear shift that more and more people don't have music or media on their devices."

"Today, there's been a clear shift that more and more people don't have music or media on their devices — they use iTunes in the Cloud, or subscription services like Spotify," says Karim Morsy, the creator of Djay. "Spotify integration has been one of our top requests." As music consumption moves towards streaming services, I think Spotify has a more interesting opportunity than simply becoming the iTunes for the streaming age, as many have dubbed it. Where hundreds of accessories "Made for iPod" once made iPods that much more appealing, I think we're about to see even more services and apps that are made for Spotify, or made for your other favorite music services. 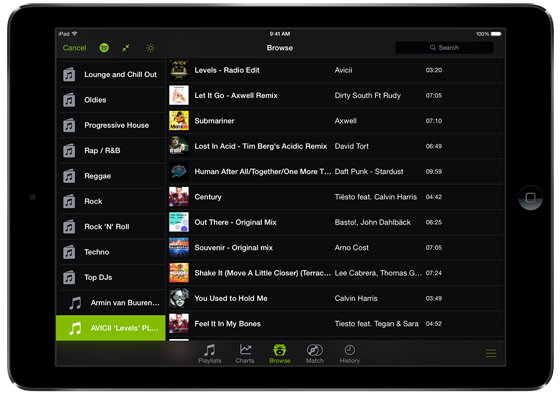 The feature sets of Spotify and competitors like Rdio look nearly identical, so it's the partnerships and integrations that could set them most apart. Spotify and Rdio, specifically, have shared a lot of the same integrations in the past — everything from Sonos to Shazam — but lately, Spotify seems to be edging ahead. A few months ago, Pacemaker for iPad, another DJ app, launched boasting Spotify integration, albeit in a more casual and playful package. The apps are two of the best DJ apps you can download, and both only offer Spotify if you want to mix from a collection bigger than your local iTunes library.

"We're widening our lead in the digital music space."

Further, from the company's Play button — present on music blogs — to its playback integrations on sites like Last.fm and news-making apps like Spotiamp, Spotify's partnerships seem intended to amplify the company's reach in any way possible. Spotify's free shuffle mode on mobile takes another approach. It's losing the company money, but is aimed narrowly at increasing mindshare and getting people talking about Spotify. "We're widening our lead in the digital music space and will continue to focus on getting everyone in the world to listen to more music," said CEO Daniel Ek.

Many speculate that in order to break even, Spotify (or any other streaming music service, for that matter) will need a lot more than 10 million users. While not everyone is interested in paying $9.99 / month for music just yet, Spotify's partnerships and integrations mean that your monthly subscription could buy you a lot more than just music.