Since 2009, when Facebook introduced the ability to post statuses and photos publicly for the whole world to see, posting publicly has been the default. Today, Facebook is changing the default privacy settings for new users to "Friends only." This means that when anyone signs up for Facebook, their posts will by default only be viewable by people they've added as friends. To many of us, the distinction might be obvious, but Facebook is today taking a few more steps to make sure that even its longest-standing users know exactly who they're posting to.

Alongside its new posting defaults, Facebook will also soon prompt all of its users to do a "Privacy Checkup" on who they're sharing with and with apps you've given permissions to. At some point in the near future, a dialog box will pop up and ask you to confirm whether you want to share publicly or with friends by default. You can still choose your audience on a per-post basis, a menu that Facebook has also taken the opportunity to simplify. The social networks' new audience selector is more visible on mobile (pictured below), and uses clearer language to describe exactly who's going to see your post. "It's worse to accidentally overshare than to accidentally undershare," says product manager Mike Nowak. 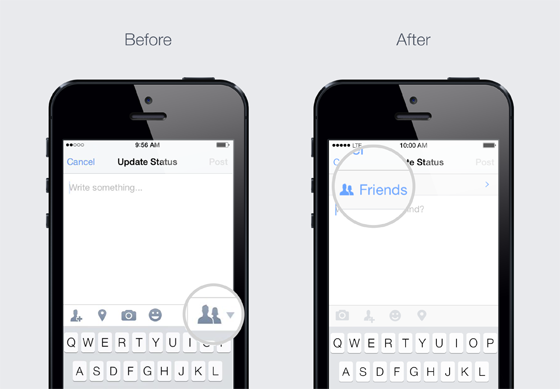 Facebook's new audience selector is definitely clearer than it was before, but Facebook may have a larger problem on its hands than it realizes: the Friends list is still too broad. Giving users the option between sharing publicly and with their friends list is like giving someone the choice between yelling from the top of a mountain and yelling in their town square. Both audiences are quite general — especially considering that for many people, their Facebook friends list is a list of everyone they've met since they joined the site. But perhaps not for many of Facebook's newest users. Last we checked, Facebook had tallied 1.28 billion active users per month.

Facebook has made various noble attempts to encourage sharing with only a select few of friends, but it's not yet clear how many people have adopted the company's new methods. Nevertheless, today's update is a good step in the right direction towards an even more transparent and accurate sharing system in the future. What this also means, however, is that Facebook is now competing with Twitter on a different level than it was before. Facebook has emphasized posting publicly time and again over the years, and has even added follow and unfollow buttons to let you track someone's public posts. At one point, TechCrunch points out, Facebook at one point even "recommended" that you post most of your statuses and photos publicly.

In the early days of Facebook, you could only post to your friend network. Today's update marks a return to that kind of community, but your friend list is likely more public than it's ever been.