LG's new phone UI is rounder than its smartwatch

Share All sharing options for: LG's new phone UI is rounder than its smartwatch

A flurry of leaked images and details have left little mystery about LG's next flagship smartphone, the G3. The Korean company has now dropped the pretense of secrecy entirely and is openly talking about the ecosystem of accessories it intends to surround the phone with. First up is the new QuickCircle case, which comes with a multifunctional porthole in its front flap and support for Qi wireless charging.

A porthole for your portable

Described by LG as "more stylish" than the typical rectangular window cases, the QuickCircle gives access to the most common smartphone applications without the need to open up the case. Calls, texts, photos, music, and even health tracking info can all be handled via this window. It's akin to having a smartwatch implanted on your smartphone, though it's odd to see LG go with a circle on the phone when it's planning a square G Watch.

The G3 is going to feature a large 5.5-inch display, the same size as on the company's earlier G Pro. That device was universally recognized as a phablet rather than a smartphone, but now LG believes it has come up with a solution that will give users the same screen size without the same usability issues. Part of that formula will be the ultra-thin bezels on the G3, which like the G2 before it will likely feel significantly smaller than its actual size. The other approach is to shrink the screen down to a roughly 2-inch window for the most basic and common tasks. We'll learn more about how that combination fares at LG's official launch event in London this coming Tuesday. 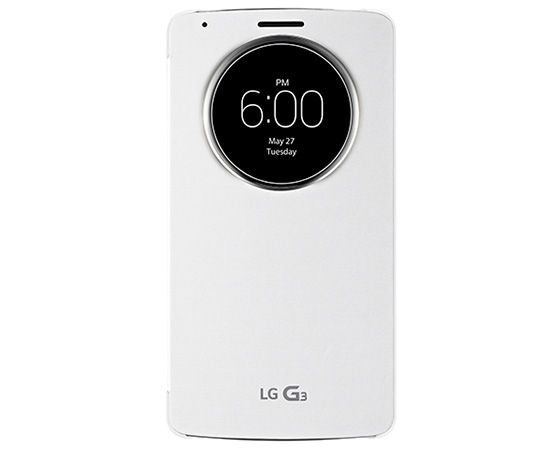