Dark and violent: 'SXPD' is a comic book you can play

Dark and violent: 'SXPD' is a comic book you can play

The creator of ‘Earthworm Jim’ returns to revisit a personal favorite

SXPD is a violent, post-apocalyptic comic book that includes many of the conveniences digital readers have become accustomed to. Not only does the art really pop on an iPad's Retina display, but you can smoothly swipe from one scene to the next, while music and sound effects accompany the static on-screen action. But at certain points, the tale about a futuristic, all-female police force shifts from being something you read to something you play. SXPD is an almost seamless blend of comic book and video game, and thanks to director David Perry — best known as creator of the Earthworm Jim series — it's an excellent one.

SXPD takes place at an undetermined point in the future, in a "lawless hidden 52nd state" called New Royale. Despite this description, New Royale does in fact have a police force to defend it: the titular, motorcycle-riding group known as the SXPD. And it's a good thing, too, because the state seems to be under a constant deluge of violence and criminal activity. Threats include everything from an occult motorcycle gang to a terrorist group with members who wear disturbing baby face masks. It's not exactly a deep or sophisticated story, but it presents plenty of opportunities for over-the-top action sequences and violence rendered in manga-esque black and white, with the occasional, bloody splash of red.

"We set ourselves the goal to try to make it feel like you're dropping right into the comic experience."

The book is divided into six chapters, for a total of 42 pages to read through, and in each chapter there is at least one panel that you can play. SXPD's interactive portions put you on the back of a speedy, high-tech motorcycle equipped with machine guns and missiles, as you attempt to mow down any and all bikers you come across. The gameplay is relatively straightforward and doesn't change much throughout the experience, but it does offer high-octane fun that fits well within the SXPD universe. It's also pretty challenging, as the high speeds coupled with some dark and twisted mazes make it easy to crash and lose sight of your targets.

The game was developed by Dutch studio Little Chicken, with Perry overseeing as director, while label One Big Game serves as publisher. Perhaps the only non-profit video game publisher in the world, One Big Game publishes new releases from notable creators, with profits donated to a variety of children's causes. Previously it released the excellent Chime for Xbox Live Arcade, as well as iOS music game Winta, created by Parappa the Rapper visionary Masaya Matsuura. 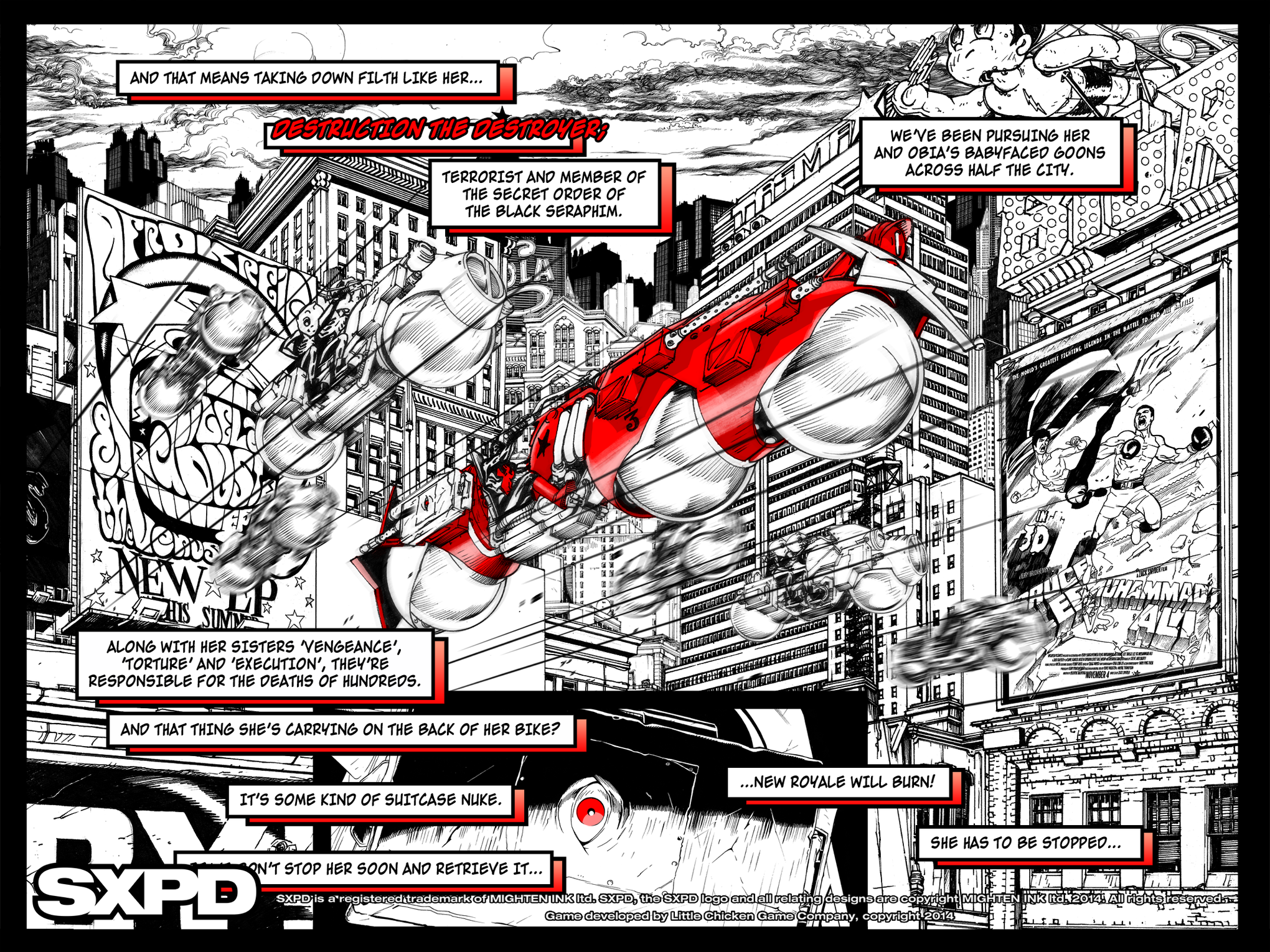 For Perry, the goal was to create a new take on one of his favorite games, 1983's 3D Deathchase for the ZX Spectrum. SXPD is meant to be an homage with a modern sense of style. "The later levels, when you have a full forest zooming by in 3D, are shocking," Perry says of his first experience with 3D Deathchase. "How on earth did [developer] Mervyn Estcourt get a 2D ZX Spectrum to do so much graphical work in real time?"

There's plenty of room to grow

Part of what makes the game work is the way it looks: the 3D portions have the exact same style as the comic book pages, making for a smooth transition from one to the next — it really feels like you're racing through the same dingy, monochromatic streets. The development team enlisted the help of artist Duke Mighten, who previously worked on Batman and Punisher comics, to craft the look. "We set ourselves the goal to try to make it feel like you're dropping right into the comic experience," says Perry.

For a game that was released several decades ago, 3D Deathchase is understandably simple. And while SXPD features more depth and excitement, the gameplay is still pretty basic. "All retro games tend to be simple repetitive affairs and that would be hard to turn into a massive console title," explains Perry. "I think it was a great choice to go with mobile and to keep it simple so it can get consumed when people have time. I have made the game challenging as that also reminds you of games in the past." It took two years of development to get that feeling just right.

The complete package is available today on iOS for $1.99. But like most comic books, SXPD's story is serial in nature, meaning there's plenty of room to grow if the first episode is a hit — there's a lot more to New Royale than just what's in the game. "Comics are also consumed over months or even years," says Perry, "so we had to think about how to leave this all open-ended to allow more story and experiences in the future."

A
Andrew Webster5:33 PM UTC
Look at this Thing.

A
Andrew Webster4:28 PM UTC
Get ready for some Netflix news.

Jennifer Pattison Tuohy1:30 PM UTC
A
Andrew Webster1:05 PM UTC
Looking for something to do this weekend?