Share All sharing options for: Google Fiber teams up with Netflix in fight against Comcast's internet tolls

Google fired a shot across the bow of big ISPs like Comcast and Verizon yesterday, stating in a blog post from its Fiber division that it would never charge a content company like Netflix fees for a direct interconnection with its network. This positions Google squarely behind Reed Hastings, who has argued that such interconnect fees are an unfair toll being charged by internet gatekeepers and that the FCC should ban them as part of an expanded definition of net neutrality. The public display of allegiance from Google, siding with Netflix against the ISPs, is part of the larger battle heating up as the FCC debates the future of its open internet rules.

In the post, Google focuses on the positive impact this kind of direct interconnection can have on consumers. "So that your video doesn’t get caught up in this possible congestion, we invite content providers to hook up their networks directly to ours. This is called ‘peering,’ and it gives you a more direct connection to the content that you want." Google isn’t alone in offering this kind of peering to Netflix for free. Many ISPs across Europe have joined the Netflix Open Connect program, putting Netflix hardware in their facilities and hooking it up directly with their network. Smaller ISPs in the United States, like Cablevision, have done the same thing.

The big American ISPs, however, like Comcast, Verizon, and AT&T, refused for years to partner with Netflix on Open Connect. Over that time "congestion" on their networks got worse, and Netflix performance for consumers suffered noticeably. Eventually Netflix agreed to pay Comcast and Verizon for direct interconnection. In the span of just a few months, performance improved dramatically.

"There is plenty of capacity."For Netflix, this was proof that the "congestion" was never really an issue, but rather a bottleneck created by Comcast in order to force Netflix's hand and justify its fee. "There is plenty of capacity, as demonstrated by the fact that after we reached the deal with Comcast, they put online a lot more bandwidth rather quickly," says Neil Hunt, Netflix chief product officer.

The ISPs would argue that there were indeed costs associated with the expanded capacity, everything from installing new ports to moving wires and managing the additional connections with Netflix. "As we all know, there is no free lunch, and there’s also no cost-free delivery of streaming movies. Someone has to pay that cost. Mr. Hastings’ arrogant proposition is that everyone else should pay but Netflix," wrote AT&T’s Jim Cicconi. "That may be a nice deal if he can get it. But it’s not how the internet, or telecommunication for that matter, has ever worked."

Google is attempting to put the lie to this line of reasoning from the ISPs. Agreeing to free peering, the company says in its post, is the best solution for all parties involved, both economically and in terms of quality. Of course, it’s in Google’s interest to say that. Remember, it is also one of the biggest content providers on the internet. And as analyst Dan Rayburn pointed out yesterday, Google, along with big companies like Microsoft, Facebook, Amazon, and Apple, all have multiple paid interconnect agreements with the big ISPs. If Google could convince the FCC that this kind of paid peering should be illegal under net neutrality, it would no doubt save itself far more money than it currently spends providing the same services on the fiber side. 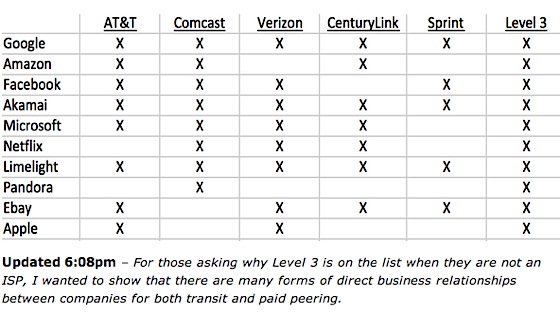 For now, the amount of money changing hands during these paid interconnect deals is extremely small compared to the billions in revenue that both the internet companies and ISPs generate each quarter. In fact Netflix deal with Comcast is arguably a big competitive advantage for them over other streaming video services.

What’s ultimately at stake, however, is the power dynamics in the long term. The ISPs want to be able to charge content companies, both for special connections to their network, and possibly for priority lanes that privilege which bits get to the home first. That’s a future Netflix and Google dread, which is why, despite already doing paid peering deals, they are fighting back in such a public fashion, hoping to win over the FCC as it debates a new set of open internet rules.

Netflix takes on internet providers: the fight for the future of online media