Share All sharing options for: Radioactive kitty litter may have ruined our best hope to store nuclear waste

Some of the most dangerous nuclear waste in the US is currently scattered between 77 locations all over the country, awaiting permanent storage. Until February, many experts suggested that the best place to put it was a facility about 40 miles east of Carlsbad, New Mexico, called the Waste Isolation Pilot Plant (WIPP). For 15 years, WIPP has operated as the first and only permanent, deep geologic nuclear waste storage facility in the country, holding "low level" radioactive materials — mostly clothing and tools exposed to radiation from nuclear weapons production — in steel barrels more than 2,150 feet below the Earth’s surface.

But earlier this year two emergencies brought that suggestion — and WIPP’s future — into question. And now it seems kitty litter may be to blame.

WIPP is in a salt desert, and much of the work there involves burrowing through the salt and using huge elevators to deposit the stuff at surface level. The resulting underground caverns are then filled with radioactive waste and eventually closed shut, sealed forever. 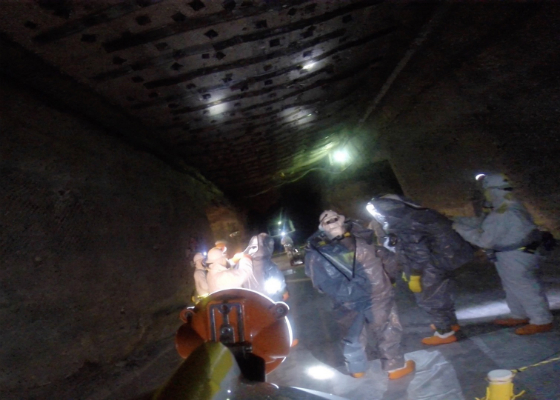 Investigators search for a radiation leak at the Waste Isolation Pilot Plant in Carlsbad, NM. (Department of Energy)

In February, according to a press release from the US Department of Energy — which oversees operations at WIPP — two things happened to stall that relatively simple process.

First, on February 5th, a salt-hauling truck caught fire. That would be an inconvenience on the side of a highway, but in an enclosed salt cavern surrounded by nuclear waste, it’s a potential catastrophe. Workers evacuated the site. Fortunately no one was hurt. But the fire was significant enough to shut down underground operations until investigators could figure out what happened and how to stop it from happening again. Surface-level operations continued.

But not for long. Nine days later, late at night on Valentine’s Day, an alarm sounded, indicating that radioactivity was present in the air underground. No one was below ground at the time, but employees on the surface activated massive fans designed to ventilate the underground air. The next day, another monitor went off — this one on the surface — indicating airborne radiation. Employees who worked outside on the surface were told to take shelter inside buildings completely separated from storage operations. Valves allowing air to flow underground were sealed with high-density expanding foam. Everything came to a standstill, indefinitely.

There are no indications that anyone has been injured from the radiation leak. (All employees went through examinations for radiation exposure; a DOE press release says most workers were not affected, and those who were "received less exposure than a person receives from a chest X-ray.") But for months, nothing has changed. The standstill remains. WIPP’s 850 or so employees are mainly sitting around, waiting (or "performing surface facilities maintenance or assisting with procedure reviews and revisions") while investigators from the US Department of Energy (DOE), the New Mexico Environment Department and elsewhere attempt to figure out what happened.

Initially, there were two hypotheses. The first was that something had gone wrong with the supports inside the cavern where waste was being stored. If that were the case, it meant a piece of salt rock or a steel support had fallen into one of the sealed barrels, puncturing it and releasing radiation into the air.

"That was an unlikely possibility," says Norbert T. Rempe, PhD, a retired geologist who spent decades as a principal engineer at WIPP. The cavern where the radiation monitor went off had been dug only recently, so the chances that supports had eroded or collapsed were probably slim. 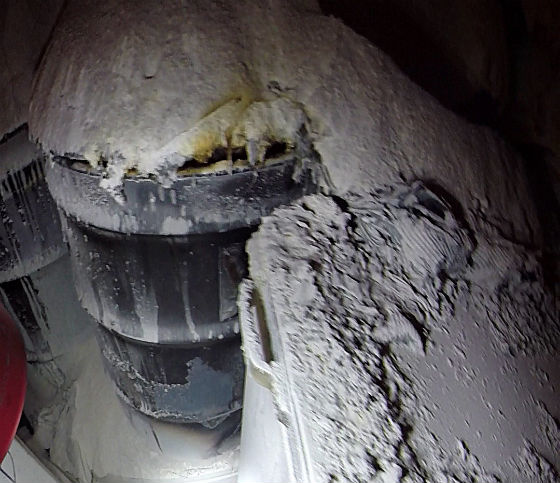 Organic kitty litter likely caused a steel barrel's seal to puncture at the Waste Isolation Pilot Plant in Carlsbad, NM. The damage and the resulting radiation leak could close the facility, experts say. (Department of Energy)

More likely, he said, was the second hypothesis: that something had gone awry inside one of the radioactive containers — that the radioactive material had become hot for some reason, expanding and puncturing a steel barrel from the inside.

Last month, DOE investigators went into the cavern. Pictures showed that the latter hypothesis was true; a waste container’s lid was unsealed, and dust around the lid had turned yellow from the unusual heat emanating from inside. Each barrel is labeled to track where it came from. The punctured barrel originated from Los Alamos National Labs.

Jim Conca, PhD, a geologist who worked for years at WIPP who now blogs at Forbes about energy issues, believes he knows what blew the lid off at least one of WIPP’s radioactive barrels. The culprit, he wrote, was kitty litter.

"When someone decides to deviate, that is a bad, bad thing."

As Conca explains it, inorganic cat litter has properties that make it ideal for stabilizing nitrates in radioactive material — for ensuring that it doesn’t dry out and become dangerously hot. So kitty litter is often mixed in barrels with the low-level waste that’s eventually sent to WIPP. What happened at WIPP, he believes, is that one of the radioactive shipments was mixed with organic instead of inorganic material. "‘Green’ cat litter," he writes, is "made with materials like wheat or corn. These organic litters do not have the silicate properties needed to chemically stabilize nitrate the correct way." The result: "solutions can ignite when they dry out."

In other words, the whole problem at WIPP — the radiation leak, the months-long stall in operations, the worries over safety — results from one person’s mess up. (Yesterday, a DOE press release confirmed that kitty litter "may have caused a chemical reaction" that lead to the leak.)

"Everything nuclear is proceduralized," he tells The Verge. "It’s well laid out and everything everyone does is supposed to go up and down the chain of command. When you decide on a procedure for doing something like treating this waste, you don’t deviate from it. Ever. And when someone decides to deviate, that is a bad, bad thing."

He continues: "In this case, it could shut down the most successful nuclear repository in history."

Apart from the absurdity in a multibillion-dollar project halted by the decision to use off-brand kitty litter, the real lesson here may lie in the fragility of even the best nuclear storage facility. Corrective action at WIPP could be a massive undertaking. How many other barrels contain the dangerous organic cat litter? Are all of those barrels underground at WIPP? Are they awaiting shipment at surface level in places like Los Alamos? Or are they located at the temporary storage site in Andrews, Texas, where some containers were transferred when problems arose at WIPP?

"Expert assessment will be needed," writes Per Peterson, a professor and researcher at UC Berkeley’s Department of Nuclear Engineering, in an email shared with The Verge, to merely "determine whether the safety benefits of stabilizing or repackaging the material in these drums are justified by the risk to personnel who would attempt to do this work."

And if the DOE decides stabilizing or repackaging the material is unjustified, that would close WIPP for good.

"If that happened, it would be a shame and a disaster — particularly for taxpayers," says the retired WIPP geologist Rempe. The DOE estimates the total cost of the WIPP plant to be $7.2 billion.

Even if WIPP does begin operating again, "we have no idea how long this will take until WIPP is back to normal operations, or what the new normal operations will be," Rempe says. "No one knows right now. And it could be a long time before anyone knows."