The spat between Amazon and book publisher Hachette is starting to get ugly, leaving both authors and consumers to deal with the repercussions. The online retailer has been castigated in recent weeks for employing questionable tactics and irresponsibly wielding its tremendous influence as it looks to strike a new ebooks deal with Hachette. Many books from the publisher are experiencing long shipping delays — often between two and three weeks — even when Hachette insists that it's fulfilling Amazon's every order in a timely manner. And as The New York Times notes, the pre-order button has disappeared for some upcoming Hachette titles including J.K. Rowling’s latest novel.

Great. Amazon is now deliberately delaying books from Hachette. Looks like some of my books are affected too. http://t.co/Bu8gt2pvG9

Amazon is noticeably cutting back on discounts as well, putting Hachette's books much closer to their full list price. And in some instances, the company has used banner ads to highlight "similar items at a lower price," a move that has incensed writers caught in the middle of a discord they have no control over. 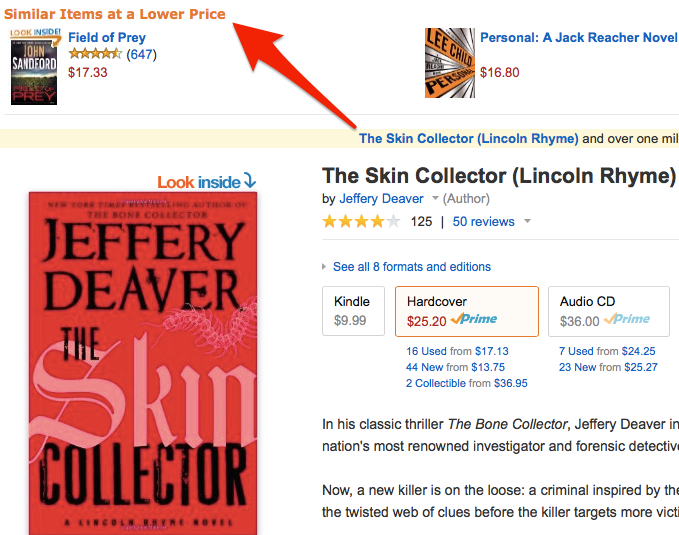 Most recently, Amazon has halted paperback sales of Brad Stone's The Everything Store, a book Jeff Bezos' wife has attacked as "lopsided and misleading." There's been no explanation for the change, but it must be noted that The Everything Store is published by Back Bay Books — an imprint of Hachette. Needless to say, authors are livid at Amazon over the company's hardball approach to landing a better deal with Hachette. "This is a brutal and manipulative tactic, ironically from a company that proclaims its goal to fully satisfy the reading needs and desires of its customers and to be a champion of authors," said Gail Hochman, president of the Association of Authors’ Representatives, in an interview with The Washington Post last week.

The Hachette-Amazon battle moves to a new level as buy & pre-order buttons are taken off forthcoming releases. https://t.co/HfwIttcXUl

This isn't the first time Amazon has exercised control of the US book market to its own advantage. In 2010, the retailer briefly removed the "buy" button from books published by Macmillan. At the time, Macmillan was displeased with the $9.99 price that had become the norm for Kindle ebooks and was pressuring the company to hike up rates. Amazon's response was to make it impossible for anyone to purchase Macmillan's books — in both digital and physical form. The company eventually relented and raised ebook prices for Macmillan titles.

Adding to this frustration is the Justice Department's seeming refusal to take a closer look at Amazon and investigate whether its bullying behavior violates antitrust laws. Instead, the DoJ has focused its attention on Apple and book publishers, concluding that both sides conspired to raise ebook pricing. The outcome of that case largely benefitted Amazon's cutthroat pricing model. Hachette hasn't offered much comment on the growing rift, only saying that "Amazon is holding minimal stock" of its books "for reasons of its own."