International Sun / Earth Explorer 3 (ISEE-3), an abandoned 1970s spacecraft that once measured solar winds and flew through the tail of a comet, is headed back towards Earth. And last month, the pair of citizen scientists began an effort to make contact. After a successful crowdfunding campaign, their team is poised to take control of ISEE-3, with the chance of restarting a data-gathering mission that’s been dormant for almost 20 years. Earlier this week, the ISEE-3 Reboot project reached an official agreement with NASA, the first time the agency has approved an outside team attempting to resurrect a spacecraft that it never planned to use again. Now, Cowing, Mingo, and their team have until mid-June to fire the thrusters, diverting it into an orbit close to Earth. If they fail, ISEE-3 will swing around the Moon instead, continuing its solar orbit. It will not near Earth again for decades.

ISEE-3 was launched in August of 1978, almost exactly one year after Voyager 2. Equipped with 13 sensory instruments, the craft settled around Lagrangian Point 1, a gravitational sweet spot where objects can be held in orbit directly between Earth and Sun. Over 900,000 miles away, scientists at NASA used it and two closer craft to measure solar winds. But three years later, ISEE-3 would get a new name and a new mission. Under flight director Robert Farquhar, it was dubbed the International Cometary Explorer (ICE) and sent in dizzying orbital loops towards Comet Giacobini-Zinner, which it would intercept in 1985. Though it was several years old and carried no camera, ICE would become the first craft to ever fly through a comet’s tail, beating out more sophisticated machines racing to reach Halley’s Comet. For the next several years, NASA would continue to gather data, but as ISEE-3 / ICE drifted farther from Earth, operations slowed, and the mission was officially terminated in 1997. After a brief check in 1999, communications ceased altogether. 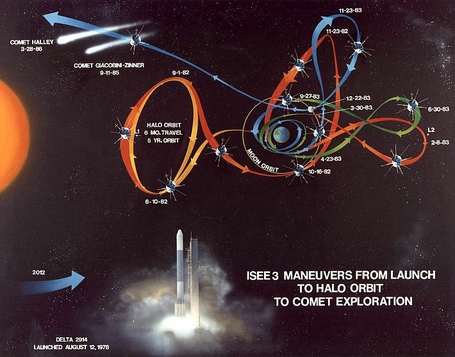 Then, ISEE-3 reappeared. In 2008, the Deep Space Network found that the craft was still transmitting a signal; NASA would later explain that by the time the mission was terminated, it was simply too far away to issue shutdown commands. More importantly, it was scheduled to fly close to Earth in 2014. Originally, Farquhar and others were optimistic about at least taking control of the craft. But as the date of arrival drew near, a Goddard Space Flight Center team realized that they couldn’t even communicate with it. "The transmitters of the Deep Space Network, the hardware to send signals out to the fleet of NASA spacecraft in deep space, no longer includes the equipment needed to talk to ISEE-3," said a Facebook post. "These old-fashioned transmitters were removed in 1999. Could new transmitters be built? Yes, but it would be at a price no one is willing to spend."

That’s where amateurs and citizen scientists, including Cowing and Wingo, stepped in. After reading an interview with Farquhar, "we just got to talking about it," says Cowing. "One thing led to another, we both made some phone calls and did some calculations, and we realized that this was actually quite doable." If they could recreate the language used to talk to the spacecraft and get access to a powerful enough radio telescope, they would be able to bring it back.

"You keep saying ‘It’ll be important someday!’ Well, it was."

Before ISEE-3 Reboot, the pair operated the Lunar Orbiter Image Recovery Project, a highly successful effort to recover lost photographs from 1960s lunar satellites. This experience, as well as their NASA connections, served them well: they were able to collect reference material from some of the original mission team. "Typically, after 30 or 40 years, your wife says, ‘Why don’t you throw that crap out?’ And you keep saying ‘It’ll be important someday!’ Well, it was," Cowing says. "They kept many of the documents that were required to tell the spacecraft what to do, because a lot of them knew that it was coming back to Earth in 2014." Software-defined radio could compensate for hardware that no longer existed, making it possible to speak to ISEE-3 once again.

NASA couldn’t fund a recovery mission, though it provided advice and documents to Winger and Cowing. But the public, it turned out, could. A crowdfunding campaign reached its goal of $125,000 after a month, ultimately getting over $150,000. With that money and direct equipment donations, the team got two power amplifiers and set up ground stations at Morehead State University and the Arecibo Observatory in Puerto Rico, which houses the world’s largest and most powerful radio telescope. So far, they’ve detected a signal from ISEE-3, and Cowing believes they stand a very good chance of communicating with it in days or even hours. If they’re able to send it commands, they’ll ask for a status update and may alter its spin speed or orientation. Once they’re convinced it’s safe, they’ll attempt to push it towards its new orbit as soon as possible. "The sooner we fire the thrusters, the less fuel we need," says Cowing. "These engines haven’t been fired in decades, so we’d rather not fire them any longer than we have to."

If they can take control of ISEE-3, then what? It’s possible that it could start a new mission. As of 1999, 12 of the 13 instruments were known to be still working, and almost three-quarters of the original fuel supply remained. Though its battery is dead, the solar panels must be functioning at least enough for it to transmit a signal. Maintaining such a mission, however, would take money that the team doesn’t have right now. Instead, one of the project’s greatest findings could simply be that it’s possible to bring an abandoned spacecraft back under control, and that NASA will give its blessing to these unofficial projects.

Citizen scientists of the future, for example, might want to resurrect the Spitzer space telescope, an exoplanet probe that’s facing shutdown as part of NASA budget cuts. "People said, ‘Why don’t you take control of that?’ Well, one lost spacecraft at a time," says Cowing, noting that Spitzer is a more complex craft that would take more work to capture. "But it’s only a couple million dollars a year to run these things, so all it takes is somebody with a little philanthropic intent to either write a big check or — look, we’ve raised more than a tenth of a million dollars. We’re like 10 percent of the way there to running a far more sophisticated spacecraft. So if we can do it, others can."

As NASA pursues an ambitious Mars mission in the face of constant budget crunch, Cowing hopes that everyday citizens will be able to build new spacecraft, not just commandeer old ones. He’s optimistic about the rise of cubesats, which can be made cheaply and relatively easily — though the cost of launching them is still significant. "Smaller isn’t necessarily better, but smaller often means that you can think in different ways than if you have one big spacecraft that has everything in it. And smaller also means that you have a way to engage more people than just the traditional builders of satellites," he says. "I just think it would be cool if every school in America had a class on how to build a satellite."

Despite its age, ISEE-3 itself may still have new things to teach us. Cowing and Wingo’s lunar orbiter project, for example, produces images in higher resolution than was possible in the 1960s, and this mission could do the same for space data. "We don’t know what else we can learn from the [ISEE-3] mission. We don’t. There may be some way to analyze the signals coming back from the sensors to derive new information that nobody in the ’60s or ’70s would have ever thought to ask," he says. "To me, at the end of the day — old stuff still works."